When we meet Nick Bright, his life has never looked bleaker. A midlevel Citibank employee, he’s been kidnapped in Pakistan by a group of Islamic militants, the followers of a local Imam. Handcuffed and confined to a tiny cell, Nick knows that neither his employers nor the American government will ever agree to the ten million dollar ransom his captors are demanding. He knows what happened to Daniel Pearl and countless other captives. He fears he’ll soon be just another victim, never to see his wife or child again.

But Nick proposes a unique plan to engineer his own release: what if he uses his knowledge of the futures market to earn the equivalent of the ransom money for his captors?

That’s the intriguing premise behind The Invisible Hand, Ayad Akhtar’s spellbinding play at Theatre Exile. It’s a thriller that rarely lets up, and it’s also an extremely satisfying examination of vital contemporary issues. And it’s a fascinating exploration of what happens when cultures – and economies – clash.

After the Imam agrees to Nick’s plan, Nick ends up spending most of his time with Bashir, the Imam’s British-born lieutenant, who is charged with carrying out the scheme. As Nick educates Bashir in the language of high-risk finance – terms like “calls,” “puts,” and “shorting” are tossed around, but with enough explanation that they never feel confusing – Bashir learns the wisdom of Nick’s words: “Making money can be intoxicating… you have to stay sober.”

As time goes on, Bashir has some things to teach Nick about the Arab world’s view of the west. It’s not a difference in religious faiths, as some might say, but a dichotomy of cultural and economic viewpoints. How can people raise themselves out of poverty in a culture that views earning interest as sinful? And how can third world countries trust America when they feel that the American-designed economic system has been setup to control them rather than to help them?

As Bashir questions why big banks and corporations are involved with the local Pakistani economy, you’ll understand why the locals have become embittered by that interference. You may not agree with Bashir’s point of view, but you’ll come to understand it, as Nick does.

And after Nick teaches Bashir about the “invisible hand” – the concept that the free market is guided by everyone’s self-interest – the question arises: what defines self-interest in a nation under siege from within?

Akhtar lays out all the issues with remarkable clarity. Running just under two hours, this is a surprisingly lean play; nothing feels extraneous, even a scene when the two men bond over, and argue about, Archie Comics. As the play progresses, Nick’s status switches back and forth between comfort and terror, keeping Nick, and the audience, on edge.

And the balance of power between Nick, Bashir and the Imam is constantly in flux. By the play’s end, it has shifted decisively, but not in the way you’d expect. In fact, nothing in this play turns out the way you’d expect, and that’s a big factor in what makes it so engrossing.

With his intense, hardened gaze, Ian Merrill Peakes is a wonderful audience surrogate as Nick, brave and crafty when he needs to be but never resorting to false bravado. His performance feels hearteningly authentic.

As Bashir, Maboud Ebrahimzadeh makes for an excellent contrast with Peakes – open and playful at times but brimming with stubbornness, and scowling when he feels he’s being condescended to.

J Paul Nicholas mixes dignity and cruelty as the Imam (and he looks great in an elegant robe from Designer Julia Poisez). And Anthony Mustafa Adair is excellent as Dar, an underling who knows the key to survival is keeping his head down – literally.

A lot of ideas are thrown about in The Invisible Hand, but this is not a dull debate or a dry economics lesson. It’s a gripping lesson in self-preservation – for a person, and for a culture. 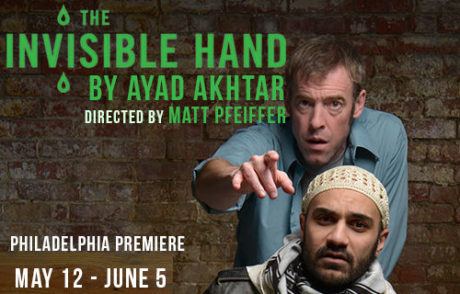