Why is sudden fame so destructive? Can true friendship survive the pressures of show business? Those questions and a whole heaping spoonful of soulful, Motown-inspired music were a part of Tantallon Community Players’ Dreamgirls, playing through June 12th at Harmony Hall Regional Center in Fort Washington, Maryland. With music composed by Henry Krieger and the lyrics and book by Tom Eyen, the show first premiered on Broadway in 1981 and won six Tony Awards. Thanks to Music Director LeVar Betts, Choreographer Debbie Clark and Tony-nominated Director Christopher Gerken, Dreamgirls is a touching reminiscence of the rise of Motown and the struggles of Black recording artists through the ages. Gerken and cast created a musical performance for the ages and brought Broadway to the Potomac.

In Act One, which takes place starting in the early 60s, we see the formation of The Dreamettes, in Chicago. During a singing competition at the Apollo Theater in Harlem, New York, we hear the songs “I’m Lookin’ for Something, Baby” by the Stepp Sisters (Kandace Foreman, Christine O. Wells, Alani D’ Lawren, and Maecy Richardson), “Checkin’ it Over” by Little Albert and the Tru-Tones (Jory Holmes, Angelo H. Cline, Matthew Williams, Jesse Cao, and Branden Mack), and “Tiny Joe Dixon” by Tiny Joe Dixon (Kenneth L. Waters Jr.) and “Move (You’re Steppin’ on my Heart)” by the Dreamettes. Though they lose the competition, the Dreamettes meet their soon-to-be manager Curtis Taylor Jr. (played with devilish malice by Jason Ellis).

Curtis, never one to leave well enough alone, convinces Jimmy “Thunder” Early (C.J. Faulk, who electrified every scene he was in), a popular R&B star, and Jimmy’s manager, Marty (Kevin Sockwell), to employ The Dreamettes as backup singers. In their first collaboration, we see Jimmy and The Dreamettes sing “Fake Your Way to the Top.”

Though that single leads to some success, Curtis changes things up again by having Jimmy aim for the pop market. C.C. aka Clarence Cornel, Effi’s brother (the soulful, crooner-voiced Theodore Sapp), composes “Cadillac Car” for Jimmy and The Dreamettes, who tour with the song “Cadillac Car (On the Road)”, only to see their work stolen by the fictional mainstream singing group Dave and the Sweethearts (Sebi Sola-Sole, Becky Keteltas and Sophie Bevirt), who record “Cadillac Car” (Reprise)”—stealing the original recording’s popularity. (Dave and the Sweethearts were projected onto the upstage screen—credit Foreman’s film direction.) In response, Curtis, C.C., and Jimmy’s producer, Wayne (Cline), resort to bribing disc jockeys across the nation to play Jimmy and The Dreamettes’ next single, “Steppin’ to the Bad Side,” sung wickedly well by Curtis, C.C., Jimmy, and Wayne.

C.C., Effie, Lorrell, Jimmy, Curtis and Deena sing the moving “Family” and The Dreamettes, now renamed Deena Jones and the Dreams make their club debut in Cleveland, Ohio, singing their new single “Dreamgirls”, one of the highlights of the musical. By 1967, the group is ready for Las Vegas. The soap opera continues, Effie’s pregnancy by Curtis looms in the near future, leading Curtis to replace Effie with a new singer, Michelle Morris (Wells). Jimmy brings bravado and verve to “Walkin’ Down the Strip”.

Effie powerfully confronts the group, Curtis, and C.C., with “It’s All Over.” Effie’s “And I Am Telling You I’m Not Going,” as she pleads with the unforgiving Curtis, was the highlight of the show and an example of musical theater at its best. Act One ended with Corisa Myers receiving a well-deserved standing ovation.

Act Two moves us along to the 70s: it’s 1972, Deena Jones and the Dreams have become the most successful girl group in the country. Curtis and Deena have married, and C.C. is in love with Michelle. The out-of-luck Effie is back in Chicago, and a single mother to Magic, her daughter. Curtis and Deena give us the beautiful duet “You Are My Dream.”

Marty urges Effie to make a show business comeback with the heart-wrenching “I Am Changing.” Meanwhile, Deena wants to become an actress, an idea Curtis hates. Jimmy’s funky “The Rap,” was good, in a shocking way. Myers again gave us her rendition of  “One Night Only” which was unforgettable. “Hard to Say Goodbye (My Love)”, by Curtis, Deena, Lorrell, Michelle and Effi brought the musical to an emotional apex.

I loved the Costume Design of Holli Goral and Elaine Sullivan; every piece the Dreamgirls wore, especially the dresses, matched not only their radiant personalities, but, thematically, the scenes they were in. Shemika Berry’s hair and makeup work evoked 60s and 70s style. Dance Captain Kaycie Goral helped make the dance scenes crisp, eye-catching and Broadway-like. Producer Larry Carbaugh has a certified, Tony Award-level success on his hands. Myers is an absolute star.

Garnering standing ovations at the end of both acts, Tantallon Community Players’ Dreamgirls is the gold standard of Community Theatre musicals.

Running Time: 2 hours and 45 minutes, with a 15-minute intermission. 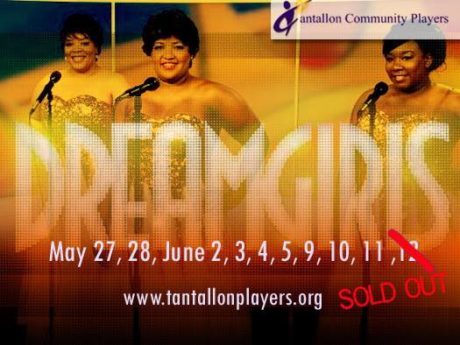