It’s Christmastime at the Norton house. The three Norton boys – well, they’re in their forties, but they sure act like boys most of the time – are spending the holiday with their widowed dad. They’ve had every advantage in life – the best home, the best suburban neighborhood, the best education – and on the surface, everything seems hunky-dory.

So why does the oldest son suddenly break down sobbing in the middle of dinner?

Young Jean Lee’s play Straight White Men analyzes the lives of these insiders from an outsider’s perspective, one that’s rarely explored in contemporary drama. The play veers between self-conscious satire and heartfelt drama, not always successfully. Its situations are gloomy one moment and ridiculous the next. But the play will give you a lot to think about, and Director Matt Pfeiffer’s production for InterAct Theatre raises some knotty questions without skimping on the show’s dramatic core.

The characters in Straight White Men might be, well, straight and white and men, but they’re not bigoted caricatures who only exist to be mocked. The Nortons have always been on the side of fairness and righteousness, no matter how unlikely that may seem. Back in high school, oldest son Matt “got the drama teacher fired for only casting white people in Oklahoma!” “You were always such a socially conscious kid,” dad Ed tells him approvingly. The boys’ late mother taught them “how not to be assholes” by creating a board game called “Privilege,” a take-off on Monopoly that replaces “Chance” cards with “Denial” cards. (A sample card: “‘I don’t have white privilege because it doesn’t exist.’ Get stopped by the police for no reason and go directly to jail.”)

But while the Nortons may not be bigots, that doesn’t stop them from being jerks. They curse, taunt each other, and play mean-spirited practical jokes. (Youngest brother Drew is in therapy after decades of trying to cope with mistreatment from his older brothers.) They’re mature, reasoned adults one moment, overgrown children the next. They’re capable of lucidly discuss heady topics like self-actualization and happiness, yet they happily drop the subject and dance like fools if a good song comes on the stereo.

While these lighthearted moments give the play a lot of energy, they’re repeated so often that they become wearying. It’s not until late in the play that much of the silliness is jettisoned and the play goes in an unexpectedly dramatic direction. As the family tries to determine why Matt cried at dinner, they grapple with the burden – and in Lee’s mind, it’s definitely a burden – of being a straight white man. While middle brother Jake succeeds in the business world by ruthlessly using every advantage his innate status gives him, Matt has resigned himself to a temp job and is living with his dad. The reason? Well, it’s not what you’d expect – except that being a straight white man plays a big part.

Lee, an Asian-American woman who has to deal with her lack of privilege every day, has created an alternate universe where these matters are a primary concern for the very people who, in real life, would probably never have to worry about them. It’s an invitingly absurd premise, and for the most part, Straight White Men pulls it off. However, the between-scene transitions, in which a stagehand (non-white and non-male, as specified in the script) moves the props around with plenty of flourishes, come off as too fanciful. They’re diversions that seem out of step with the rest of the show.

Matt Pfeiffer’s direction is fluid and unobtrusive. Tim Dugan and Kevin Meehan are excellent as Jake and Drew, capturing their characters’ inherent dichotomies. Dan Kern scores as their gentle father, who tries to be supportive but perplexed by his sons’ behavior. And Steven Rishard is superb as Matt, his grief-stricken face always connoting the extent of his torment and guilt.

Straight White Men is satiric and thought-provoking, making some important points without feeling didactic. You may not always like Lee’s message, but with this engrossing play, she makes it hard to ignore. 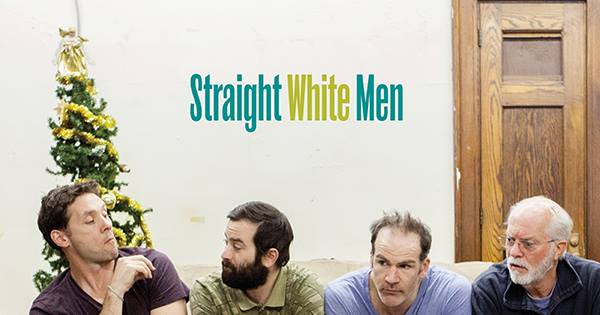