In many ways, it’s startling to learn that Trouble in Mind was first performed in 1955. Alice Childress’ play was decades ahead of its time: it’s a satire of racial stereotypes in American entertainment and a commentary on racial relations. And with its blunt language and attitudes, it shoves politeness and pretense aside in a way that’s remarkable for any era.

Childress was tired of the way African Americans were being treated, and she made it clear in no uncertain terms. Six decades later, as Stagecrafters’ fine production shows us, the play’s lessons are still relevant. 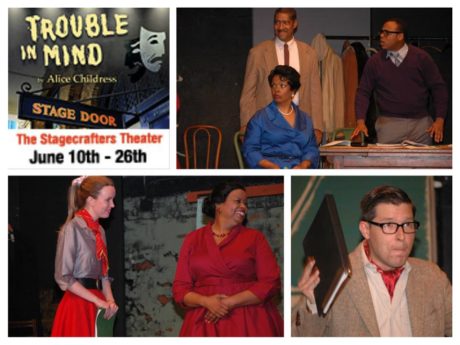 Trouble in Mind opens on the first day of rehearsal for a new Broadway play, and the mostly-African American cast arrives with mixed feelings. The actors are grateful for the work, but they’re not crazy about the play, which requires them to play exaggerated Southern black stereotypes to the hilt.

Wiletta, a former leading lady of musical revues who has been relegated in middle age to playing maids and “Mammies,” instructs a younger actor how to behave around the whites running the production. “Don’t get too cocky – they don’t like that,” she says, adding “Make them feel superior.”

The actors all go along with Wiletta’s plan for a while, gritting their teeth through every indignity. Eventually, though, the play’s arrogant director – who proudly proclaims his own lack of racism, but fails to see his own condescension – pushes the cast to the breaking point.

Trouble in Mind isn’t just an ethereal discussion of the actor’s life; its characters have to struggle with survival in the segregated America of the 1950s. We see a black actor who is having a hard time finding a landlord who will rent to him. There’s a white actor who doesn’t mind acting with blacks yet feels uncomfortable eating lunch with them. And a young, naïve, white actress from a rich family blithely invites the rest of the cast to her parents’ Connecticut home, not realizing the difficulties that will cause.

Childress’ play tends to get wrapped up in its own importance at times; there are sections about acting techniques and Actors Equity rules that are of little concern to anyone not working in the theatre. But the play’s frank approach is refreshing, as it examines crucial issues with perception and clarity.

Trouble in Mind is a tricky play to pull off; it switches between the naturalistic dialogue of the actors and the artificial dialogue of their play-within-a-play characters. Balancing those different acting styles is challenging, but director Yaga Brady does it with a minimum of fuss.

Vanessa D. Ballard is vigorous and poised as Wiletta, while Jaron C. Battle is funny and earnest as an eager-to-please young actor. Nancy Marie is feisty as an actress who bristles at every slight, and Anne Marie Bonner brings depth to the role of the white actress who grows increasingly troubled by her character’s tone. Jim Broyles is pleasingly egotistical as director, while lary moten gives dramatic power to a speech about a painful memory he cannot shake.

Brady also provided the convincingly dingy set design. And Jane Jennings’ costumes contribute a great deal to the show’s period feel. The distinctive suits for the director – a turtleneck in one scene, a cravat in another – reveal a lot about the character.