How do you make fun of someone who always makes fun of himself? Well, last night, Roastmaster Bob Saget and The Kennedy Center’s District of Comedy Festival managed to do just that, roasting Chester James Carville, Jr.—better known as James Carville—and it was glorious!

Louisiana-born James Carville is well-known as Democratic President Bill Clinton’s campaign strategist, who authored the now iconic line, “It’s the economy, stupid!”, and for his many television appearances commenting on current political events. Referred to as “The Ragin’ Cajun,” Carville is a lawyer, author, actor, and former Marine, and is also famous for marrying his exact opposite, Republican campaign consultant Mary Matalin.

From hosting America’s Funniest Home Videos on television to appearing in Hand to God on Broadway, Roastmaster Bob Saget’s career has truly been a study in contrasts. He is well-known as the wholesome Danny Tanner, widowed father of three little girls in the wholesome television sitcom Full House, but is also famous as a raunchy, X-rated, no-holds-barred stand-up comedian. In fact, he is the author of the New York Times best-selling book, Dirty Daddy: The Chronicles of a Family Man Turned Filthy Comedian.  And, in a recent radio interview, Saget warned that the Carville roast would be appropriate “for audiences aged 21 and up.”

Truer words were never spoken. The District of Comedy Roast of James Carville was definitely X-rated! Constantly peppered with the “F word,, the jokes included numerous scatological and anatomical references, with great emphasis on Carville’s sexual prowess (or lack thereof). However, for the adult audience, the show was a pure delight—side-splittingly hilarious, surprisingly enlightening, and just plain fun.

In addition to the filthy lines, much of the humor dealt with Carville’s looks, his Louisiana accent, his drinking and gambling, and his personality. There were plenty of references to political figures, as well. As Roastmaster, Saget began the roast by describing Carville as “part man; part Skeletor.” He went on to explain that, even though the roast would include “cruelty, racism, and sexism, it was not an endorsement of Donald Trump.”

Another roaster was political strategist Paul Begala, who served as Counselor to the President during the Clinton administration. He and Carville worked together for 30 years and co-authored three books. Begala pointed out that Carville had written thirteen books altogether, “which means he has written more books than he has read.”

Comedian, actor, author, and radio personality Jim Norton took the podium and described Carville’s looks and dress as “a cricket who joined a barber shop quartet.”

Next up was S.E. Cupp, a conservative columnist, author and commentator.  First, she took a swipe at the previous speaker, saying that Jim Norton is just like Donald Trump—“tiny staff, no money, and women hate him.” Then, she asked Carville, “You’re an old, bald, white guy from the South; how can you not be a Republican?”

Self-described as the “Roastmaster-General” of the comedy world, Jeff Ross continued the festivities by imitating Democratic candidate Bernie Sanders:  “We’re going to have a political revolution and then go out for soup. And, everyone pays for their own soup!” He went on to say that he half-expects Bernie’s mother to stand up in the middle of a crowd and yell, “Bernie, fix your hair!” Not to be left out, he also mentioned Carville’s looks:  “He looks like television’s legendary Mr. Peanut!”

Carville’s wife, Mary Matalin, who has served for decades as a Republican political consultant, recently became a Libertarian. She said she was glad to be at a comedy roast because she “hadn’t laughed since Trump announced he was running for President.”

Renowned civil rights leader and television commentator Reverend Al Sharpton got his licks in about Carville’s looks:  “James Carville is considered a Washington ‘insider’ because, when you look like him, it’s best to stay inside!”

Of course, the guest of honor had the opportunity to give as well as he got. For example, Carville made fun of Paul Begala’s pasty white face, saying that he doesn’t get enough sun. “That makes sense, since he’s been in James Carville’s shadow for thirty years!”

All in all, The District of Comedy Roast of James Carville was a dazzling display of comic genius and political savvy, and a thoroughly entertaining event.

Running Time: Approximately 2 hours and 45 minutes, with no intermission. 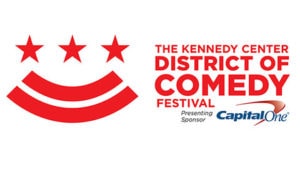