The current production being produced by the theatrically provocative and cutting-edge Rainbow Theatre Project —entitled Get Used To It! A Musical Revue!–may be a bit of a misleading title, for this stimulating evening is more akin to an ever-evolving, intimately narrative song cycle that mirrors the emotional and psychological complexities of a group of gay men. The songs follow one another fluidly and synergistically in a totally organic fashion with a musical flow that pricks one’s consciousness at every turn.

President Obama has just declared the Stonewall Inn as a Historic National Monument, the tragic Orlando deaths are heartbreakingly reported by the media, Gay Marriage is on the rise and “Don’t Ask, Don’t Tell” has been removed from the military. In the LGBTQ experience, the historical mooring points are always in flux—constantly shifting and evolving. This musical song-cycle proves this point —-the personal narratives of the gay men singing about their lives spiral into a collective reality that Gay men are all too well aware of.

Comprised of eighteen distinctive and intriguing songs that encompass the various permutations and attitudes of the Gay experience, the Composer and Lyricist Tom Wilson Weinberg has provided a score that is alternately witty, dramatic, intense, sardonic and —always—-compelling. Though originally produced in the early 1990’s, the songs are all very relevant to the concerns of the LGBTQ community today.

The atmosphere of a 1993 Gay bar in New York City comes vividly alive courtesy of Set Designer Greg Stevens. An effectively glitzy yet authentic-looking Gay bar setting greets patrons of this marvelous production as soon as they enter the intimate Theater space. Under H. Lee Gable’s astutely-etched directorial eye, the cast of four sing and act the hell out of this wonderful song cycle.

Cast member Mickey Daniel DaGuiso sang “Who’s That Man?” with lusty gusto and aplomb. DaGuiso ‘s small and wiry build was perfectly suited to this ribald song which detailed the sexual dating and cruising rituals of the Gay male’s purview.

The song “Hymn” was a spot-on sardonic look at the false piety of so many in the religious community. With eyes towards the heavens and prayerful hands clasped, the distinctively different yet resonant voices of cast members Patrick Murphy Doneghy, Aaron Jackson, and Mr. DaGuiso blended harmoniously in perfect tone.

“Three –Letter Word” was a delightful spoof on wordplay with words such as “Christopher Street”, “Queen” and “Gay” explicated in all of their meanings by Doneghy and Jackson.

Aaron Jackson next sang “Friends in High Places” with his beautiful tenor voice. This witty song attacked hypocrisy in all its ugly forms.

“I’ll Call You Lover” was a stunning and tender ode of love and deep affection between two gay men. The sensuously silky and beautifully expressive yet authoritative vocals of Mr. Doneghy paired so very effectively with DaGuiso’s more animated persona.

“Bat Boy” as performed by DaGuiso was a harrowing exploration into the horrors of gay –bashing and it was performed with all the dark intensity and tragic sorrow that would accompany such a disturbing theme.

“Flaunting It” was an exuberant song of joy about the quasi-theatrical posing –and narcissism employed as a defense mechanism —so prevalent in segments of the gay world. Mr. Doneghy and Mr. Jackson sang their hearts out with ebullient gusto throughout every not e of this fine song.

“Who Did Langston Love” was the highpoint of a production replete with highlights. Mr. Doneghy started the proceedings off with his rich, resonant tones as he sang of Langston Hughes, the famous poet. Next, Mr. Jackson sang poignantly of Martin Luther King and activist Bayard Rustin. Finally, Mr. DaGuiso sang of the wonderful author James Baldwin. Indeed, this song compelled me to ponder deeply the historical significance of these famous figures in deeper and more meaningful ways.

“How We Get the News” was a devastating musical lament about each individual’s response to learning of their loved one’s death from AIDS. As Doneghy, DaGuiso and Jackson sang of their responses to their loss, tears could be heard in the audience. Composer Weinberg built the song beautifully with a subtle accumulation of emotional power.

The final song “Can’t Wait” was a musical cry of defiance against the established order holding the LGBTQ community down even in the most trying and tragic of times. Visuals were heightened as protest signs and banners were unfurled to display solidarity and protest. Cast members DaGuiso, Doneghy, and Jackson were joined by the very animated and talented cast member Mr. Derek Mulhern in this thrilling finale. Mr. Mulhern served very ably and hilariously throughout the show as the bartender at the well-crafted bar and in a couple very amusing short but effective novelty numbers.

Effusive commendations must be given to the very natural yet artful Choreography by Robert Mintz, the sparkling Musical Direction by Mickey Daniel DaGuiso, the beautifully evocative Piano accompaniment of Alex Tang and the Managing Direction by Michael Kelley. Obviously, extra kudos must be sent to Artistic Producing Director H. Lee Gable for his astute Direction of this stimulating and challenging production.

The intermingling of the LGBTQ context from 1993 to the world of 2016 does not seem that different at all for the struggles of our community continue.   This scintillating cycle of musical moments conveys so much deep meaning in the variegated tapestry that weaves together the entire LGBTQ community and our own individual life stories.

In the LGBTQ community, for every advance there seems to be a reactionary setback such as the recent Orlando, Florida massacre to the hostility from leaders and many parts of the world from Russia to many African nations to the Caribbean. The message from this superb production is to survive at all costs with any coping mechanism at hand.

Do not miss Get Used To It! for a musical trip inside the hearts of our fellow human beings who are part of our shared humanity! 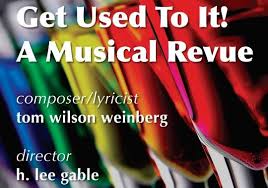 Get Used To It! A Musical Revue! plays through July 2, 2016 at The Rainbow Theatre Project, performing at FlashPoint – 916 G Street, NW, in Washington, DC. For tickets, purchase them online.