Through an email interview with DC based Pleasure Train’s bassist Will Berger, we talked about the band’s favorite venue to play in, their musical journey highlight so far, and how they write their music.

How did your band get its name?

Early in the life of the band, some of us were sitting around drinking beer and trying to come up with a good band name. Our keyboardist, Mike, offered up “Pleasure Train” almost as a joke, and it just stuck. It took some of the other band members a while to come around, but eventually we all realized it’s a really awesome band name. It’s evocative, provocative, and memorable–and it does a pretty good job of distilling our band’s vibe and general approach to music and life! Also, if we ever find ourselves embattled in legal issues and unable to use our band name anymore, we can always change it to Treasure Plane.

How did your band form?

The band formed after longtime friends and guitarists Ian Dandridge and Richard Fiegel had a conversation about the future of music and what genres would define our generation. After a long discussion of personal influences which ranged from 70’s giants such as Led Zeppelin and the Grateful Dead to modern acts including Tame Impala and Deadmau5, the two began envisioning the style of music they wanted to see develop in the future, and began the search for like-minded musicians. Keyboardist Mike Paquette was recruited first, bringing wide-ranging influences to the table including jazz and electronica. Vocalist Valerie Vega was connected with the band seemingly by chance, after her rich, soulful voice caught the attention of Fiegel while he was browsing YouTube videos of local singers. The lineup was completed when drummer Andrew Gabor and bassist Will Berger came on board, rounding out the band with an upbeat funk and R&B-influenced rhythm section. 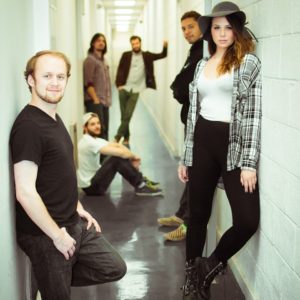 How would you describe your music?

Our music incorporates a fusion of influences including groove, alternative, jam, jazz, pop, soul, and house. We don’t actively try to make music in any particular genre. What ends up coming out of the speakers is a mix of rock, funk, and soul, with a heavy dose of psychedelic and a touch of deep house.  Our music has also been described as “sex groove” due to its undeniably sexual nature–it can’t be explained, you have to come to a show and find out for yourself!

What is your favorite venue to play in the DC area?

That’s a tough one, because we’re constantly discovering new great places to play. Iota Club & Cafe in Arlington is always a fun time for us–the crowd there tends to be people who come intending to listen to music, and to get down, which we appreciate. Playing the Sylvan Theatre on the National Mall was fun, except for the fact that it was freezing and our guitarist almost lost several fingers! The corner of 14th and Madison NW in the pouring rain, that was a fun one too.

What do you listen to?

A better question would be what don’t we listen to? We all have varied but overlapping musical tastes, and you can find us at shows and music festivals all over the place. Some of us love jam bands, some of us love raves and electronic music, some of us love blues and Americana, some of us love indie rock and shoegaze…it goes on and on and on. All of us have a healthy love and respect for the classic artists that defined the 60s and 7os–the Beatles, the Dead, Zeppelin, the Allman Brothers, and so on.

What inspires your music?

Every member of this band has their own individual brand of creativity, and we would all likely be making music regardless of whether we had ever crossed paths with each other. The thing that inspires us to keep making music as Pleasure Train is the unique energy that is created when the six of us get in a room together and make sounds. For many in the band, playing together is the single thing that inspires us the most. Our collaborative songwriting process means we each get to watch our own little ideas and contributions snowball into something we could have never even imagined on our own. It’s far out, man.

What is your songwriting process?

It usually starts with an instrumental jam of some sort–it could be the full band or it could just be something that two or three of us came up with during a late night jam session. The band will work out a song structure and Valerie will listen, sometimes writing her lyrics while the band jams, other times using lyrics she has written beforehand. Some songs materialize pretty quickly, others take a lot of work, sanding the rough edges and whatnot, before we are happy with them. Many of our songs are in a state of slow evolution, where playing them live has made us learn that they need more or less of a certain thing. We are all very openly critical of our music amongst ourselves (in a constructive way) which means we end up doing a lot of tinkering.

What are some of the highlights of your band’s musical career?

Oh boy. We feel like we’re still just getting started! If we do this thing right, the highlights are all going to be in the future. One of our favorite shows so far has been when we got to open for Aqueous at the Bungalow in Chantilly. Those guys are just incredible musicians and performers and they’re blowing up all up and down the East coast, so it was exciting for us to have the chance to play with them.

What are your plans for the band?

To scratch the musical itch with each other and spread love, joy, and a good time to others while doing it. To travel far & wide and bring our music to all corners of the seven continents. To keep having a blast writing and playing music together.

How do you let other people know about your music?

What is your upcoming schedule?

We are playing at the Auld Shebeen in Fairfax on Friday 6/21, with local bands We’ve decided it is time to take a short break from performances to focus on recording our partially completed album. We’ll be dropping a single from the album later in the summer and are very excited to show the evolution in our sound (our first record, a 5 song EP, was recorded back in November 2014). In the more distant future, we are excited to be on the bill for Not Fade Away Festival, September 1-5 in Aldie, VA.