Angela: What was the inspiration for 22 Boom!

Miranda: It was a compilation of plays that I wrote on demand for patrons at Baltimore’s Center Stage. I was in residence there as the Hot Desk Playwright from 2013-2014, and I helped to launch a program called Wright Right Now. It was the collective brainchild of Center Stage’s dramaturg Gavin Witt and dramaturgy fellow Catheríne Rodríguez. Basically, a playwright sits in the lobby of the theatre — and we later expanded to sitting outside of food trucks, at street fairs, board meetings — and taking commissions from willing patrons. I set up a desk and a sign in the lobby of the theater — usually on a Thursday — and I’d call out, “plays on demand!” Some people were really enthusiastic and some were very skeptical. But I’d talk to the first 5-7 people who came to the desk, and ask them something like, “so what’s on your mind these days?” or they’d tell me directly what they’d like a play about, and I’d go off an write something while the show was going on. I capped myself at 2 pages. Plays were ready by intermission or the end of the show. I did this about 7 times over the course of the season. I wrote a lot of mini plays! And I took my favorites, and compiled them as 22 BOOM!

Any plays that particularly surprised you?

The whole thing really surprised me. I could never anticipate what people were going to ask for. I think one of the nicest thing s about this exercise is I would never have written any of these plays on my own. I certainly don’t think I would have started writing 2 page plays for fun. But it turned into this incredible writing prompt that injected my work with a quickness and a zeal that was lacking in my longer form. That has been essential to my work moving forward. And I found it in these power bursts of short plays. There were some topics people presented and I was like – oh God, what do I have to say about that? And some of those turned out to be my favorites. There was a banal commission about how bad the traffic in Baltimore was getting to the theatre — it really infuriated this one guy – and it turned into a play that I love. I also got a kick out of this guy who came up and said, “I have been trying for my entire marriage to convince my wife I love her more than I love the dogs.” That turned into a musical number. I also loved that so many people brought up reasons why they were going to the theatre. I think going to the theater was making people feel adventurous, which gives me a lot of faith.

How did this exercise affect your writing?

I think it helped me tap into a kind of spunk and humor than I’ve been wanting to bring in more in my work. I had to make these without thinking too hard. I think the other work I was making at the time had a lot of over-thinking. But you can’t over-think when you write quickly. I think that speed can help a writer’s essence and intuition rise to the surface. It helped me bring a certain – I don’t know – Miranda –ness to my art. These little plays had a certain aspect of my spirit that my longer work wasn’t capturing at the time, and they helped me bridge that gap. The play I opened in New Haven recently is a full-length absurdist comedy called Antarctica! Which Is to Say, Nowhere, and I know I wouldn’t have been able to write that before this project.

I really think it’s different for every play. I think I’m a writer who works in a couple of different forms. It really varies. There’s the absurdist comedy branch, the poetic drama branch, the unusual family branch, the irreverent musical branch. I think that these plays are their own form, because they’re only two pages. And in that sense, it’s unlike anything else that I write. But looking backwards, I can see the seeds of later plays coming through some of the humor and pacing of these shorter works.

When you go to the theatre, what do you hope to find in a play?

I really love being surprised. I love laughing and gasping and crying. I love feeling that whole range of entertainment. That delights me. Sometimes I cry in musicals just because they make me so happy. There are some plays when actors and performers just get the opportunity to be larger than life, or the story is just somehow enormous, and I think to myself, “you people are gods.” I love that kind of awe and scale. It’s terrific to be mesmerized by other people’s talent. 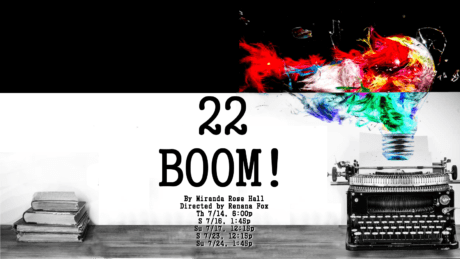