In Ain’t that Rich, California-based writer and comedian Kate Robards delivers a dazzling solo performance, one as mesmerizing and powerful as it is funny. The show is now making its debut at the Martin Luther King Jr. Memorial Library as part of the 2016 Capital Fringe Festival.

This mostly autobiographical riff on poverty and wealth manages to extract comedy from a background as grim as that of any fairy tale. And indeed, Robards tells her Cinderella-like story with such amazement and glee that it takes a while before the impact of deprivation—as severe in this affluent country as in any developing nation—sinks in.

Growing up in a small town in Southeastern Texas—two hours from the nearest airport and light years away from the world that most of us inhabit—Robards manages to escape. It’s partly luck, partly sheer determination and partly the ability to make up stories about her family and their circumstances.

One of the most hilarious of these inventions occurs at the very beginning, when Kate—visiting one of the town’s “rich” families, presumably the owner of a funeral parlor—delivers a wonderful speech in mock Swahili, learned, she explains, when she went to school in Kenya.

Later, when the neighbor insists on driving her home, she describes the shack where she’s let off as “our junk house.”

But of course, the “junk house”—with its falling-down roof and piles of “stuff”—is where the Robards family lives. And it’s where the Cinderella-like Kate, when not inventing stories, hides in her room, surrounded by books, while chaos, fueled by alcoholism, reigns around her.

The fact that she manages to marry a modern-day prince and achieve a life in which she and her husband are philanthropists, not victims, is a story more amazing than any she invents.

At times hilariously funny and at times heartbreaking in its depiction of pride and loss, Ain’t that Rich explores some of the gaps between rich and poor. Race and gender play an all-too-painful role in the way things turn out.

Director Keiran King does a remarkable job pulling the pieces together and keeping the pace so brisk that there is no time to reflect on the bridges that connect different times and places. The only improvement this show needs is a reduction in some of its background sound. Some sounds are clever—and constitute parts of the plot—while others are just distracting.

After the show, I asked Kate Robards if she was related to the legendary actor, Jason Robards, Jr.

For years she pretended to be Jason’s grandaughter.  “It was one of my favorite lies,” she said.

But truth is stranger than lies, even when lies seem outrageous. A genealogy report reveals that Kate and Jason—along with many others named Robards—are indeed cousins. Distant, but related. Who knew?

Theatrical royalty or not, Kate Robards delivers a powerful performance, and Ain’t That Rich is a must-see show. There are only three more performances, so catch it fast. 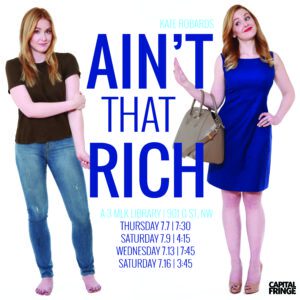