Errant Movement took to the stage of Gallaudet University’s Elstad Auditorium on ‘opening night’ of the Capital Fringe 2016 festival, with sole responsibility handed to the talented workings of seven young dancers and five gifted choreographers. 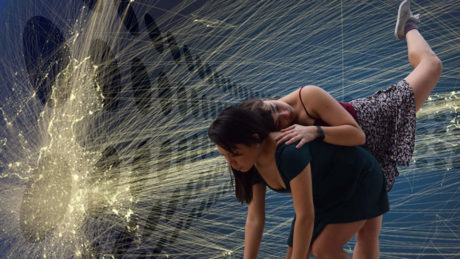 Connectivity/Complexity – also the title piece of the showcase – is led by Artistic Director, dancer, and Choreographer Rachel Turner. She, along with a creative team of instructors; Weng Cheong, Kristina Ancil Edwards, Zsari Delaney, and Ronnique Murray have comprised a total of eight movements, all painting pictures of tactical interpretive dances. Without using elaborate props or intricate lighting arrangements, Errant Movement boldly touches the subjects of racial inequality, human trafficking, and the modern-age’s obsessive need to be connected with non-stop news coverage.

Just shy of the first anniversary of its founding, Errant Movement’s leading artistic minds have no trouble proving why Connectivity/Complexity holds true to their definition-reflective mission statement; “to stray from the proper course or standards” – their perfo rmance does just that.

The opening number, “For Now, We Walk” is a less successful interpretation of unsynchronized gestures, and numerous sound cues, but it is soon forgotten as, “Breath Withheld” swiftly emerges – choreographed by Edwards. Dancers Karlin Gatton, Julia Tomanovich, and Rachel Turner are impassioned representations of a willful sisterhood in this daring escapade.

Equally as charming by soloist movements are Emilia Kawashima in “Verve,” choreographed by Turner, and whimsical Tomanovich – “It’s Complicated” is daringly humorous. “Memory’s Shadow,” performed by Mariana Barros and Kaya Simonson, provides a general message of individual life recollection, yet a further glimpse will see two parallel lives than face a daily, repeated struggle for survival in a world where the color of their skin has obligated them against complete acceptance.

Costuming is light, possibly due, in part to the sudden scattering of newspapers in “Connectivity/Complexity” – the production’s final exposé must’ve required multiples of quarters, and frequent trips to the Florida Avenue newsstand to pull this off. Here, the all-female cast metamorphoses from fresh, media queens, to screen-watchers addicted to their phones, to nearly-conclusive technology zombies, all in a matter of three, or four musical interludes – really. Turner’s choreography highlights the capacity everyday humans have when absorbing, and slowly obsessing over 24/7 news coverage, particularly through the global tragedies seen in worldly communities. Consistent, and intricate arm-swings – mimicking clock hands that occasionally ‘stick’ – are repurposed to represent numb, consumer reactions toward ‘bad news’ – a now, ‘routine’ and a heavily predictable occurrence.

Errant Movement the group started a mere eleven months ago – yet the display pictured in Connectivity/Complexity is enough to qualify this budding, group of theatrics as “very promising.” Keep a close eye, the best is yet to come.

Check the preview of ‘Connectivity/Complexity.’