Thrilling progressive history and the trajectory of societal forces colliding with basic human rights is delineated through the prism of three couples who are fighting for their dignity as LGBTQ individuals in the current offering, The DOMA Diaries, now being presented as part of the FRINGE Festival. 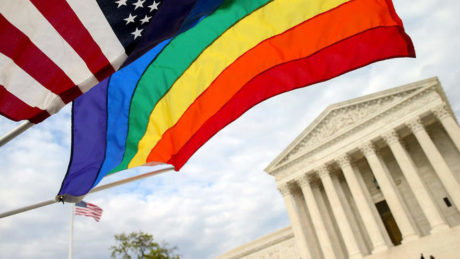 Playwright and Director Kevin Michael West perfectly conveys the thwarted frustrations, fervent idealism, pathos and —above all—perseverance and survival instincts of three couples who struggle onwards in life and, even, death. Mr. West is a master at conveying the paradox which is the crux of the LGBTQ community and individual. That paradox is that there are no easy answers in the struggles of life and that complex human emotions do not often fall easily into place when such reactionary laws as DOMA (The Defense of Marriage Act) are put into motion. (President Clinton signed this bill into law in September 1996).

This pernicious law’s dire consequences for the LGBTQ community are portrayed superbly and incisively in this play and it superbly shows the finesse and polish of West’s writing. Nothing in this full-length play (presented in a single act) seems forced, didactic or contrived. Mr. West, rather, writes with a very natural, humanistic tone even while covering a very broad swath of propositions, laws revoked, and discrimination enforced during the period of 1991 to 2013 in America. It is not an easy task to write with such subtlety when focusing on polarizing themes but Mr. West succeeds admirably,

Actor Steven Wolf’s comment that “Kevin’s script is a perfect balance of thought provocation and entertainment …….” totally captures the tone of this fine play.

A cast of six talented actors (including Mr. Wolf) vividly etch the myriad problems and complications that ensue when legalistic realities collide with idealism. Undercurrents of humor such as using gigantic hand puppets to represent the lesbian couple’s children, mocking pious platitudes, having the actors slip into multiple roles at unexpected moments and quirkily engaging musical passages between the scenes all certainly help to lighten the mood of this serious play.

West wisely trusts his instincts to make his play offer glimmers of light in the face of so much horror and dehumanizing despair that his characters must endure. (The recent Orlando massacre must be on so many people’s minds).

The gay male relationship portrayed in the play (a Russian –accented Garrett Matthews and a robustly passionate Christian Rohde) is heartbreakingly portrayed —-albeit with a hopeful ending. Mr. Matthews’ character (Oliver) is in the U.S. on a foreign Visa and is in a serious relationship with Mr. Rohde’s character (Red). Matthews and Rohde play their roles to the hilt from the impetuousness of their first meeting to their quest to stay together in the U.S. as a married couple even in the face of differing states’ marriage and domestic partnership laws. Their interactions are a delight to watch. Particularly amusing is a scene of a fantasy world gone wild where everyone and everything is Gay-oriented. The Gay male relationship portrayed here is largely based on events that Playwright West endured with his partner.

Renee Erichsen-Teal portrays the character of Janice in the second coupling which is a lesbian relationship (complete with children) with her partner Sophie (actress Nell Quinn-Gibney). Playwright West writes with complexity about the hurdles and obstacles such a couple must face when they are faced with losing their children and denied the chance to marry.  The impending onslaught of sickness and consequent health insurance rights is devastatingly portrayed by Erichsen-Teal. Directorial kudos must be given to West for directing these two engaging actresses so precisely in order to convey the seemingly antagonistic quarreling –that is only truly known to be affectionate and loving bickering by the actual participants.

The third couple consists of the immensely versatile and powerfully Joy Gerst (who portrays the character of Audrey) –Gerst draws the audience into the proceedings in the opening scene as she laments over the grave of her lesbian partner of 46 years, Diane. Ms. Gerst moved me to tears as she expressed her sorrow over the fact that she would not be allowed to be buried next to her partner. Gerst reprised a variation on this scene later in the play and was totally mesmerizing as she cried in torment over being discriminated against in both life and death. Ms. Gerst also portrayed several other characters and was totally enthralling in her command of every nuance of expression.

Steven Wolf who played George was also a standout. Mr. Wolf also played a kindhearted war veteran, a bigoted Texan, and a Father with authoritative aplomb.

The eventual and hard-fought success of overturning DOMA and allowing the Gay community to marry has offered so many new possibilities and Mr. West’s play brings this out successfully in the conclusion.

Spare but functionally effective Set Piece Construction by Christian Rohde and eye-catching Costumes by Greg Stevens must be mentioned.

For a provocative, well-written and well-acted theatrical experience regarding the inter-connection of the legal system with the human experience, do not miss The DOMA Diaries!

Running Time: 85 minutes, with no intermission.

Read the preview article for ‘The DOMA Diaries’ by Kevin Michael West.