In theory, this looked and sounded great. Brownie and Lolli Go to Hollywood is a screwball comic cabaret riff on all sorts of current issues: drug use, abortion, eating disorders, the rising costs of healthcare. Set in a series of fictional locations inside DC, it is the debut DC production for New York-based producer, director, and playwright Alycya Miller, who also wrote the book and music (with Co-Composer Darlyne Cain). 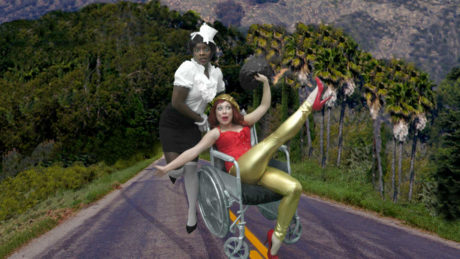 Brownie and Lolli are two down-and-out cabaret girls stuck working at a hat shop when a once-in-a-lifetime opportunity arrives for them to take their act to Hollywood to audition for the famous TV show Live at the Funky Burlesque” to replace a double act that has left an emergency vacancy. They have only quarters to their name and less than 24 hours to come up with a brand new act that no audience – real or imaginary – has ever seen.

The premise is very clever, the costumes are great, and the show has all the slapsticky tropes you’d expect from something marketed as an Abbott and Costello-style act, though I found many of the over-repeated jokes a little grating.

The cast features Lee Miller (Brownie), Grace Cannon (Lolli), Annie Leonard (the Valentine Twins), and Robbie Watters as Every Man. Leonard is a very good kind of ridiculous, and the choreography in the dance numbers is sharp. The music would be good too, but there really isn’t that much of it, and the few cabaret numbers are so short that they didn’t seem to fit into the story.

Ultimately, while the idea is clever and the potential for something more is there, I walked away from it not sure what I had seen. The ending just…happened, abruptly, without any sort of resolution; I wondered if perhaps there had been some cue missed that the cast just decided to end on without using, because it was suddenly muddled.

Given time, Brownie and Lolli Go to Hollywood could develop into a strong piece.