Bluegrass, country and folk music made a triumphant showing last night in Stephen R. Coffee’s “Rain Follows the Plow.” Coffee’s show, labeled a dust opera, concerns the Dust Bowl of the Thirties and the plight of farmers living through it. Think “Grapes of Wrath,” think songs of Woody Guthrie, think photos of displaced rural folks by Dorothea Lange. Take all you know (or thought you knew) to that least rural of settings, the Atlas Performing Arts Center in Northeast Washington, and watch Rain Follows the Plow, surely a best of the festival already. 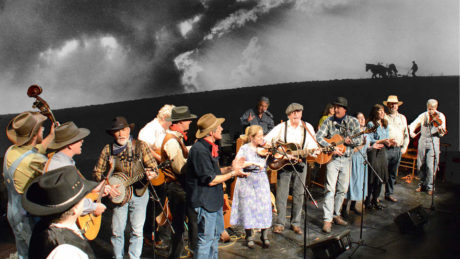 You’ll learn something, all right, but don’t be afraid of that. The entertainment value is the highest. Mr. Coffee, composer of the book and most of the songs, has assembled with Director Bill Davis, a cast of over a dozen highly-talented local folk singers. Everyone is believable, too; you never thought you were looking at or listening to modern city people.

The show starts off happily enough. US wheat is in great demand; the Midwest with its fertile grassland seems a chance place to settle in the belief that good weather and times will follow the new labor saving plow. Hence the title song sung in ensemble “Rain Follows the Plow.” The cast is all so good that it’s hard to single out all for praise. Of special note is the lovely voice of Caroline Ferrante as Ruth, a farm wife whose sings of good times to her sister by mail note the “Impossible Sky” (“the beautiful earth/the air so clear/the stars so near.”)

There’s good times for the men, with a thriving saloon culture in “Beer Town/Come to Mama’s” (the women at the latter establishment being western flashy and far from maternal.) The lyrics are appropriately earthy in these segments: “How long since you’ve seen a bosom/ How long since you’ve had a bath?”) And serious matters aren’t forgotten; veterans on both sides of the Indian wars recount trials in “Indian Joe.” All the while vintage photographs from the period are enlarged on stage. The photos and props are all deftly chosen.

The good times as we know won’t last. The worst drought in 500 years is upon these people, coinciding with the Great Depression (“If It Rains.”) Ruth’s letters, still sung, now reflect her family’s plight; those playing the children in the cast are especially good.

Rain Follow the Plow is quite capable of eliciting tears and does at times from the audience. Even at worst, hope, though misguided, remains and humor, too, when Jeff Smith and Steve Potter as Junior Buggwater portray charlatan rainmakers. Eventually by 1940 the worst is over and the migration to California and other states is slowing. The cast sings “This Land is Your Land” and requested the audience to sing along, even the lesser known more trenchant verses. Which we did.