If you’ve seen Too Much Light Makes the Baby Go Blind—the innovative devised theater work by Chicago-based company Neo-Futurists—then in a significant way you have already seen Fat Kids are Harder to Kidnap. You will notice the same clothesline with numbered fliers, menu with play titles, and looming timer upstage. Even the language of the curtain speech is roughly the same. However, this similarity should not scare away audiences: Fat Kids are Harder to Kidnap is fun, despite being derivative in every sense of the word. 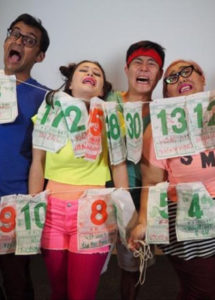 Very much like the Neo-Futurists’ piece, Fat Kids is based on a simple premise: the performers will put on 20 short plays in 30 minutes. The audience assists the five-person ensemble by selecting scenes/plays from a numbered handout that correspond to the numbered fliers on the clothesline. The audience shouts a number and the actors perform that play. Fat Kids differs Too Much Light in that the plays are teen-friendly, including bits about apps, parents, and the video game Call of Duty.

The performers are largely good but Ross Nasir is a clear standout. She performs a memorable parody of Beyonce’s hit “Irreplaceable” with perfect R&B warble, and is hilarious as a frustrated video game player. She sells one of the performance’s rare high-concept plays. She most fully embodies the energy which all of the performers have throughout; they’re having a great time and you will find it easy to join in the fun.

Fat Kids has a few small, but significant flaws. Allowing that the piece is intended for younger audiences, some of Melissa Sim’s joke writing feels stale. Young audiences will appreciate the lightness of the humor, but they will certainly hear jokes they have heard before. As the troupe is based in Singapore, some of the cultural jokes in pieces like “Singapore in Jeopardy” (for example) simply don’t land well with American audiences.

Fat Kids are Harder to Kidnap might be a hard sell for Fringe audiences because it’s brief, oriented toward young audiences, and offers material that patrons may have encountered before. But the explosive energy of the performers and delightful integration of the audience make Fat Kids worth a viewing. The performances of Fat Kids occur in the upstairs Fringe space making it a convenient refresher to enjoy between more adult shows.

35 minutes, with no intermission.