Boeing Boeing, a 1960’s French farce by Marc Camoletti, translated into English by Beverley Cross, features Bernard, a self-styled Parisian Lothario who has Italian, German, and American fiancées—all beautiful airline hostesses with frequent “layovers.” He keeps “one up, one down, and one pending” until unexpected schedule changes bring all three to Paris and Bernard’s apartment at the same time.

We asked three questions of the Boeing Boeing cast members to share their responses to this delightfully wicked French farce:

“Farce feels like a dance because there are so many marks to hit.”

Boeing Boeing is a sexy French farce. I tend to err on the side of prim and proper, so I’m having a blast playing someone different from myself. Farce feels like a dance because there are so many marks to hit and the timing is sometimes vital to another actor’s safety. My character, Gloria Hawkins, an Air Hostess for TWA, is very physical, so it’s been fun using my dance background, since I was 4, to create bits.

As “the American,” Gloria is loud, affectionate, and bossy. Her manners leave something to be desired. She is competitive and interested in furthering her financial interests. It makes sense that Gloria and Bernard would be a couple because he is a successful architect living in Paris. Gloria finds life with Bernard to be fun and fancy.

I sing Irish music and play flute and percussion as part of the Galway Girls group.

“Making her intimidating to the characters on stage, but likeable to the audience.”

I am a certified Actor-Combatant through the Society of American Fight Directors and, together with [director] Damon [Bonetti], I help ensure that the physical stunts we do are both safe and repeatable for a seven-week run.

I play Gretchen, the German Lufthansa air hostess. She is “passion incarnate.” There’s no middle-ground with her. It’s all or nothing. I see a lot of myself in her, though I hope I’m a little more psychologically stable. The difficulty with Gretchen is making her intimidating to the characters on stage, but likeable to the audience. I worked carefully with Damon and Hedgerow’s artistic director, Jared Reed, to make sure that Gretchen’s intensity wasn’t so much that the audience would be distracted by it.

I grew up in a German American household and bring a lot of my German-ness to Boeing.

Bella Italia—“bringing the spirit of my big Italian family to life on stage.”

I’m bringing the spirit of my big Italian family to life on stage. Gabriella and I share a passionate love of food. We’re good Italians. I will be wearing my Italian horns onstage.

“I am shy but love making people laugh.”

I bring a love of comedy to this production. In my opinion, comedy is harder than drama, and I prefer it when I get the choice, as I love making people laugh.

I play Berthe, Bernard’s overworked and under-appreciated housekeeper. She has a tough, no-nonsense exterior and is extremely disapproving of his playboy ways.

Most people think I am very extroverted and confident, but I’m actually very shy and get extremely nervous speaking in public when I have to be myself. I do much better when I can hide behind a character.

I received my training for the stage at the American Academy of Dramatic Arts, New York, and have performed in a number of plays and musicals, being the lead in two of them. At the Hedgerow alone, I performed in five plays. The role of Bernard requires a combination of raw comedic line delivery and physical comedy that I hope I bring to the stage. I am now pursuing a career in speech-language pathology.

I play Bernard [the womanizing Lothario], a man with an unusual, but very precise plan. And it doesn’t even cross his mind that there could ever be a glitch in his perfect system.

I am a quieter person when I’m not on stage or in the rehearsal room. I save my energy for running and acting. Additionally, when I am a speech therapist, I will use some of my acting training to adapt to my clients.

“The ability—or lack thereof—to adapt to a hectic situation.”

I have been studying comedy as far back as I can remember. As a child, I was always looking to make people laugh and even made my own toys. I made the decision to formally study acting, with a focus on comedy, at Rider University where I completed my B.A.

I play Robert Lambert, Bernard’s childhood friend from Wisconsin. I love playing this character because I relate to Robert, especially his ability—or lack thereof—to adapt to a hectic situation. 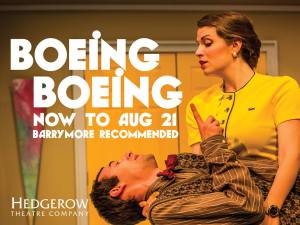 Running Time: About two hours, with one 15-minute intermission