Two sets of twins create twice the confusion and double the laughs in The Comedy of Errors, Delaware Shakespeare Festival’s 2016 selection for its annual outdoor offering at Wilmington’s Rockwood Park. One of Shakespeare’s shortest works, and also one of his earliest (1594), the Bard’s so-called “apprentice comedy” is the perfect light-hearted fare for a hot summer evening, and DSF’s cast, directed with gusto by David Stradley, relishes all of its preposterous situations, silly rhymes, and physical antics.

The story of mistaken identity–which takes its inspiration from Plautus’s ancient Roman comedy Menaechmi—is set during the Christian era in the busy port of Ephesus over the course of a single day. Aged Egeon of Syracuse, condemned to death for entering the enemy city, recounts in direct address to the audience the backstory of his family, for whom he is searching, separated 33 years ago in a shipwreck. The sympathetic Duke, upon hearing of Egeon’s plight and his determination to locate his loved ones, grants him one day to raise the money to pay the fine that will spare his life.

During that time, his identical twin sons (both named Antipholus, but one now a resident of Ephesus and one of Syracuse) and their identical twin slaves (both named Dromio), all arrive on the scene, unbeknownst to one another and much to the hilarious discomposure of a host of bewildered locals. Errant sacks of money, a ring, and a gold chain, a ship and a rope, add to the characters’ uproarious reactions to the baffling coincidence.

DSF’s production plays it to the hilt, with animated performances and a colorful design that combine classical tradition with post-modern attitude. Bob Weick captures the forlorn situation and worn demeanor of Egeus, Twoey Truong is a firm but magnanimous Duke, who facilitates the comedy’s happy ending, and J.J. Van Name (ever-skilled in her role as Shakespearean text coach) turns in a masterful portrayal of the Abbess, a key figure in resolving the madcap conundrum.

Among the delightfully confounded Ephesians are Antipholus’s wife Adriana (well played by Danielle Leneé), who can’t distinguish between her husband and his twin, and her sister Luciana (the also fine Savannah Jackson), who is pursued and flattered by his like-named brother; both register their confusion with spunk and sass. Luke Brahdt and Brendan Moser amuse as the clueless Antipholi (there is an especially comical scene with Moser strutting in the problematic gold chain), and Brian Reisman and Sean Close–perfectly cast in his side-splitting show-stealing role–impeccably deliver all the verbal and physical “merry jests” as the maltreated Dromios.

Rounding out the ensemble are Frankie Gallucci as a courtesan, Logan Kuba and Abdul Sesay as merchants, James Reilly as the jailor, and Samantha Moon as the occult Dr. Pinch, all emerging talents in the DSF’s college apprenticeship program.

In keeping with the twins theme, Scenic Designer Rajiv Shah employs an alley stage, with the audience seated on, and the cast playing to, both sides. Strings of brightly colored lanterns, lit with old-fashioned Edison bulbs, illuminate the set from above in Joshua Schulman’s vibrant lighting design. Sarah Mitchell’s costumes cleverly synthesize ancient and current styles, with each pair of twins wearing nearly identical fashions; see how long it takes for you to notice the subtle differences.

Fight and movement choreography by Samantha Reading is humorous and engaging, in complete harmony with the funny characters. Percussion beats underscore the slapstick (or here, drumstick!) blows and kicks to the stricken slaves (though happily without making any physical contact), and original music by Michael Hahn–who also serves as sound designer on the company’s clear new system—provides a contemporary ska-infused background score, performed live by the three-piece band of Zachary Davis on sax, James Reilly on bass, and Kanako Omae Neale, on the well-timed percussion.

There are no errors in this comedy at the Delaware Shakespeare Festival!

Running Time: One hour and 50 minutes, including a 20-minute intermission. 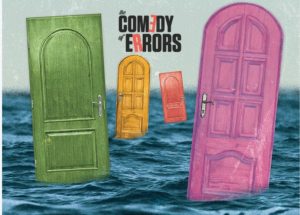 The Comedy of Errors plays through Sunday, July 31, 2016, at the Delaware Shakespeare Festival, performing at Rockwood Park – 4651 Washington Street Extension, Wilmington, DE. For tickets, call the box office at (302) 415-3373, or purchase them online.