Ben Cherington and Jack Posey are both veterans of The Theatre Lab’s summer Musical Theatre Institute for Teens productions. Ben was Edgar in Bat Boy (2013) and Riff in West Side Story (2014).

Jack played Lt. Schrank in West Side Story and Che in Evita (2014), and has also appeared in The Summer Acting Institute for Teens production Rimers of Eldritch (2013) and this past spring in Theatre Lab’s production of Titanic as Harold Bride.

They share the stage as leads for the first time at The Theatre Lab in Jesus Christ Superstar, directed by Deb Gottesman and Buzz Mauro, which opens July 21 and is already sold out. Ben plays Jesus, and Jack portrays Judas. We talked with them about their experience with this show, as well as their past roles and what’s up next for them

You’ve both played leads in previous teen shows at Theatre Lab. What are the different challenges, and similarities, if there are any, between rehearsing those roles and this one?

Ben: Each of the Theatre Lab shows I have performed in have been three of the most unique theatrical experiences on my resume thus far. Bat Boy and West Side Story each provide their own challenges for all the actors. However, the playwrights and composers of those shows have clearly laid out my character’s relationships with everyone else onstage. Being a sung-through show based on a concept album, Jesus Christ Superstar gives me more opportunity, and essentially forces me, to use my imagination and exploration to cultivate relationships with others onstage. Jesus Christ Superstar is a show that is inherently full of passion and emotion of all sorts, so being able to lock into connection with others onstage makes this more than rock wailing for two hours. Each word and each note is an attempt to evoke a change in someone else.

Jack: I would say that Judas is certainly the most challenging role I’ve taken on at the Theatre Lab, if not the most difficult of all of the roles I have played. The vocal track of this role is insanely demanding, in terms of the range and endurance that it requires. This is also the first role that I’ve played that comes with such rich cultural and historical “baggage,” if you will. Most people who come to see the show will presumably have their own point of view on who Judas is, so I’m excited to hopefully forge my own path with the character and try my best to stay true to the circumstances of this production, and to most importantly not present any sort of cliché or judgmental portrayal.

Both of your characters, obviously, are well known historical figures. Does that influence how you approach the roles, or what you think of the men themselves?

Ben: I have purposely refrained from approaching Jesus of Nazareth differently than I would prepare for any other role. Although I did a great deal of research on different writings and historical accounts, my primary “bible” for this role is the score of the musical. While it is important to know the background of a historical figure, you will still find the most useful information from the text you are given to perform. Jesus, in this text, has doubts about his actions and decisions he must grapple with; that is the important part of the character analysis I have done for this show.

Jack: It was definitely important and helpful for me to touch base with all of the Biblical text and historical research that is pertinent to mapping out the given circumstances of the character. But the most satisfying part of the process has been filling all of the blanks left by the research, all of the motivations and needs that drive the infamous actions of the character, through my own work and exploration in rehearsals. In directing me, Deb Gottesman was really instrumental in helping me navigate how to approach the character. Her decision to emphasize interpersonal dynamics and human nature within the piece, rather than craft some pointedly stylized statement piece, is one that I greatly respect and am thankful for.

It’s an understatement to say that each of your characters influences the other’s story, even though there’s not a lot of time you spend on stage together. How do you think that affects those scenes you do share with each other?

Ben: Jack and I have spent a lot of time talking about the history between Jesus and Judas. Finding their relationship before the opening number of the show is something that we have really dug into. If they had not been extremely close friends at some point, they would not spend as much time as they do trying to guide and “fix” one another before Judas makes the infamous decision to betray Jesus. Although Judas is called a traitor and betrayer by many of Jesus’ disciples, Jesus never calls Judas anything but a friend.

Jack: The relationship between Jesus and Judas is certainly one that’s central to the show. Even though the audience knows how the story ends, I hope that tracking the arcs of these individuals who exist only in the text given by Andrew Lloyd Weber and Tim Rice will be a unique and new experience. One of the things that I love exploring in the scenes in which Jesus and Judas interact is how the weight of whatever has occurred for the respective characters builds through the show. It really speaks to the fact that these were two human beings- the entire gamut of human communication and miscommunication, love and fear, is packed into this story.

What’s been the biggest surprise or most fun thing you’ve discovered during this show?

Ben: I have found it very surprising how much I am finding myself taking risks in this rehearsal process. This show is very open in that there really is not a way it is “supposed to be done.” This story has been tackled in so many styles and formats that it is way more important to focus on the people and their relationships than trying to simulate an interpretation.

Jack: I have really loved being able unpack and deconstruct a story that most everybody knows, with which most everyone has a personal relationship, and look at it with completely fresh eyes.

You’re both planning on pursuing theatrical studies after high school. Do you have specifics nailed down yet in terms of schools or anything in particular you hope to specialize in?

Ben: I have just completed my senior year at the Academy at Metropolitan School of the Arts and I am headed to Pittsburgh in the fall to pursue a BFA in musical theatre at Carnegie Mellon University.

Jack: I graduated from McLean High School and I’ll be studying theatre at Northwestern University starting this fall. I am planning to be a theatre major, but I’m not yet certain what my specialization will be. I love and have a passion for performing, and I plan to perform throughout my time in school, but I want to leave no stone unturned in my development as a theatre maker and take an overall holistic approach to my education. I absolutely want to keep liberal arts a part of my undergraduate experience, and I would really love to explore directing and theatre criticism.

What kind of impact has The Theatre Lab had on your progress as an actor or singer?

Ben: The staff at the Theatre Lab encourages each student to come to a scene with ideas, as well as an open mind to what each moment can be. Every theatrical moment can be ten thousand different things, so this teaching approach really allows the students to bring themselves to the characters. I am so grateful for that because, without Theatre Lab, I’d be stuck miles back worrying about what the “right thing to do” was.

Jack: Being a student at the Theatre Lab has made all of the difference in my growth as an artist and as a person. Deb Gottesman, Buzz Mauro, and the entirety of the staff of the Theatre Lab are so committed to the edification of their students, as well as philanthropy and social activism through their Life Stories program, in a way that is so inspiring. Their insight into the craft of theatre and their educational prowess are truly unparalleled. I have learned so much and improved as a performer with every session I have spent as a student at the Theatre Lab, and I highly recommend their classes to my friends of all ages. The opportunities for growth to be had at the Theatre Lab are truly unique.

It really is a special place- it’s housed in such a humble and space and run by such down to earth people, and that utter lack of ego and lack of pretension in that space is what makes it such a fertile ground for truly life changing experiences. There is only room for human connections, deep thought, creativity, and education in that space. The magic of the Theatre Lab is something that is so complex, and something that I have been trying to analyze for some time now, but really it’s so simple: you get to explore, create, and learn with the best educators. It’s something that one has to experience firsthand.

All performances of Jesus Christ Superstar are sold out. There will be limited standing room available first come, first served, once the box office opens at 6:45. 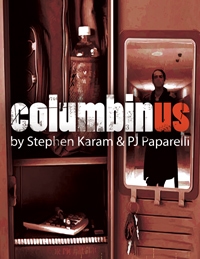 The interview is by Deb Gottesman.