The Colonial Players’ production of Sex, Drugs, Rock & Roll, written by Eric Bogosian and directed by Paul Valleau, shows off the impressive talents of the actors in this company. A series of 12 monologues, each delivered by different actors, the play presents a critique on modern life, with profound insights riddled with shots of humor and pleas for understanding. 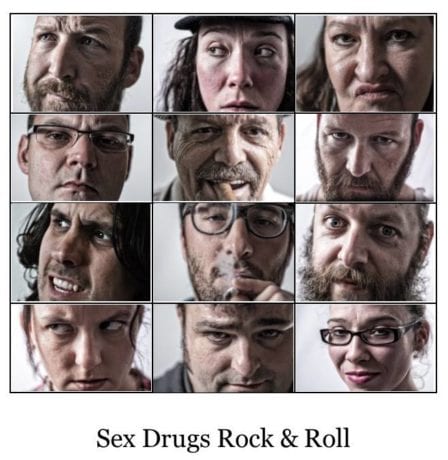 Xblow (Ben Carr) starts the show. Wearing a prison jumpsuit, and handcuffed, he begins in the corner. Delivering a rhyme, he moves to the center, full of aggressive energy. He expresses admiration for power, believing that violence is as close to being God as people can get. He considers that God “lets the dope shoot each other.” A truly disturbing character, he strolls offstage whistling.

Grace of God (Erin Hill) enters asking the audience for money. A homeless addict, she pleads for a chance to get a place of her own. The desperation and anger is clear on her face. She explains that the only difference between her and the audience is, “You’re on the way up, and I’m on the way down.” She presents a powerful reason for compassion.

Dog Chameleon’s (Kristi Valleau) anger comes through quickly, as she remarks to the audience, “you’re all scum compared to my beneficence,” (although she says she’s just kidding afterwards). She wants to be rich, “watching TV all day and eating potato chips.” She says as a child, “I never got what I wanted, so now it’s time to even the score.” Full of rage, she fantasizes about making life difficult for a shopkeeper who slighted her. At one point, she barks at the audience. She personifies vitriol.

Stud (Jeff Sprague) begins a trend towards comedy. With a twangy Southern accent and drinking a beer, he describes his success with picking up women, owing to a “large, hard,” member “that curves a little to the left.” Explaining that one woman threatened to “jump off a building if she couldn’t have me all to herself,” he enjoys the single life, taking other men’s girlfriends.

Artist (Ben Wolff) is also funny, but has a serious point. Sitting in a corner, he explains why he no longer makes art. He believes that “the system collects artists’ minds”, turning those that conform into “robots” of a sort; those who rebelled, like Janis Joplin, are now dead. As a result, he keeps his creative thoughts to himself, so that he cannot be assimilated. He is a sly commentary on consumer culture.

Stag (Josh Visnapuu) is an excellent storyteller, recounting a party he threw for a friend that goes out of control, involving call girls, champagne, drugs, a kitchen fire, and a fight with a Hell’s Angel member that gets funnier as it goes on. He paints a wonderful picture of a night of excess and pleasure. He also has moments of profound thoughts, realizing on seeing the ocean that “I’m just a small drop in that ocean.”

Candy (Erin Hill) has perhaps one of the funniest scenes in the play. A sex line operator, she describes a fantasy to a client on the phone while picking up toys and drinking juice. The difference between what she is doing and what she is saying (and how she says it) is hilarious. It is a nice comic touch that gets big laughs.

Benefit (Mary MacLeod) is also incredibly funny. An aging British rock star, she is promoting her latest album to a TV interviewer, while recounting her past with drugs and her current sobriety. Even while expressing an anti-drug message, she waxes nostalgic for her days of excess. To any children who may be watching “I had fun. Much of my music was inspired by drugs. But don’t be like me.” She doesn’t know what happened to a band member who was institutionalized for drugs, but she blows kisses to him in case he’s watching. Her obliviousness is hilarious.

Rock Law (Pat Reynolds) is a businessman. In phone conversations with his wife, mistress, and employees, he reveals the sleazy dark side of capitalism. Talking to his wife, he suggests that their son “bite his therapist.” Discussing an employee he is considering firing, he yells at the other man who dares suggest otherwise, explaining that “profits are everything.” He is an aggressive man who uses his business to express his aggression.

Live (Tim Sayles) wants to live to the fullest. His motto is “take care of luxury and the necessities will take care of themselves.” Every morning he “swims a lap” in his backyard pool, while eating a big, hearty breakfast. Wearing a bathrobe and holding a cigar, he explains “I’m here, I might as well enjoy it,” because “if I don’t, who will?”

Dirt (Ben Carr), examining the bottom of his shoe, complains that “the world is drenched in piss.” He describes the journey of water from the mountains to the ocean, recounting the various items that get carried along the way. He explains what all the fish do in the ocean as well, so that waste is inescapable. His solution? “Flush the toilet!”

Bottleman (Steve Bissett) ends the play on a sober note. A homeless man, he describes life on the streets. He complains about the price of coffee, but explains that, “they have the beans, so you have no choice” about how much they charge. He has some mental health issues, as evidenced by his yelling at himself when he misquotes a cliché, but he always “stays on the sunny side of the street,” looking at life optimistically.

Tim Brown does an excellent job with the lighting design. Spotlights are used to introduce some of the characters, and the lighting changes depending on the mood.

Paul Valleau directs this play wonderfully. The actors all enter and exit smoothly, and their characters all come across as totally believable, sometimes funny, and sometimes sad. They each tell their story, or present their case, and then walk off for the next one. With a stage bare except for a bench, chair, phone, and table in some scenes, attention is focused on the monologue.

Everything comes together in Sex, Drugs, Rock & Roll, to make a night of powerful, entertaining theater.

This production plays only this weekend, so catch it while you can!

Running Time: Approximately 2 hours and 10 minutes, with a 15-minute intermission. 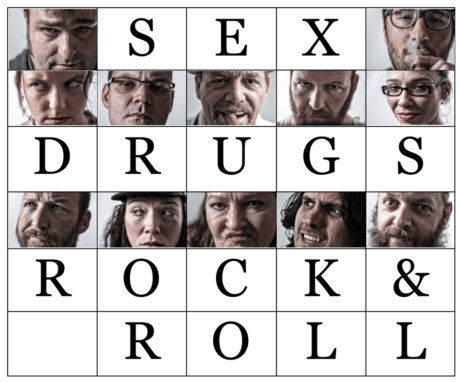 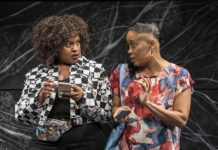