Live theater is not where we turn to learn the news in real time. We have TV and Twitter and plenty other frenzied feeds for that. But live theater may be the most potent and important form we have for uncovering our of-the-moment emotions about recent events. This matters, for it is always those emotions we most remember, however ineffable they be. And as Forum Theatre’s (Re)Acts series demonstrated vividly Monday night, one fundamental reason we need live theater is not only to share those emotions but to be assured that we are not alone in feeling them. 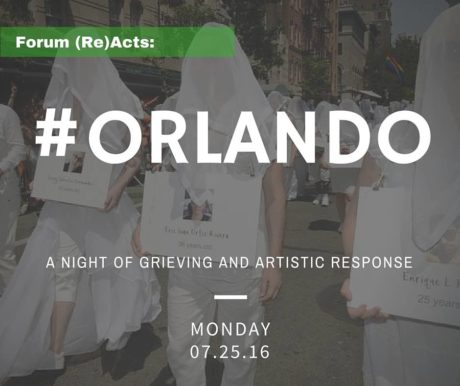 In the aftermath of the deadliest mass shooting in recent U.S. history—when a gunman opened fire on patrons enjoying Latin Night at a gay nightclub in Orlando June 12, 2016—Forum Theatre asked several local theater makers to create short pieces in response. Among the invited artists were Welders playwrights and several folks affiliated with the DC Queer Theatre Festival.

The pieces—nine in total—were performed one night only for an audience of about sixty, nearly all of whom stayed afterward for a facilitated discussion in which thoughts and feelings that arose during the performances could be spoken aloud safely. That went on for nearly another hour; it was intense; people seemed not to want it to end.

Below are the program credits with my brief annotations, to convey something  of the evening’s content. This was my second time attending a Forum Theatre (Re)Acts production—my first pertained to the #Refugee Crisis—and it was again an extraordinary experience to be in an ad hoc community of audience members and theater artists, all of whom in some sense resurfacing, processing, and finding expression for news-made emotions that fit no news-flash hashtag.

Next time Forum Theatre does another (Re)Acts, know that it could be some of the most meaningful time you spend  inside a theater and away from a screen.

The American Dream
Written and Performed by Alina Colins Maldonado

A personal poetic reflection on the meaning of “home,” which for the artist is Puerto Rico, and “freedom,” with excerpts from the song “America” accompanied by claves. A poignant observation that those Latinx who were killed that night were “finally called Americans.”

A gay son in a tender scene with his totally loving mom, “who gets it.” They reminisce about a particular green scarf, which a photo showed his mom draping around his neck when he was a boy—accepting him then perhaps more than he yet knew to accept himself. He produces that very scarf. Their fond bond is played out on a double bed. Then he abruptly says goodbye and goes out. Immediately her phone rings—without words we know the tragic news she hears—and without words we realize he has visited her in a dream.

A movement piece for four men accompanied by a prerecorded chorus of voices who declare, at one point, “We’re out and proud/all the bullets in the world won’t stop us.” But then the space is rocked by the sound of gunshots, and one by one dancing bodies are brought down dead.

A darkly surreal comedy about a gay man of color cleaning up his apartment, picking up men, and coming to consciousness about what race has to do with his sex life. At rise Danny interacts with an inexplicable Blob (a big bunch of balloons), which has a hilariously imploring and whimpering personality. Danny’s date Chris, also a gay man of color, shows up and sings a soulful/funny song about “In the wake of tragedy…/in the wake of violence…” Later Danny has a hookup with boorish White Man, who proudly asserts “I’m not a racist!” even as he revels in the blowjob he’s graphically exacting from Danny. Chris, Danny realizes, would make a better match.

A poetic, multi-voiced mediation about the importance of safe space for the latinx community; the fact that this was Latin Night, one night a week only, white Anglo gay every other night; the fact that tragedy was compounded when parents found out their children were queer at the same time they learned they were dead. The names of those dead are read aloud, one by one, their Latinx and Anglo names pronounced as their families would have said them. The victims were queer, black, and brown. This was a hate crime, targeted. “I need to hold my girlfriend and tell her I love her.”

______
Closet
Written and Performed by 2Deep the Poetess

“Dancing and loving should never be punishable by death,” says the writer/performer of this trenchant poetic monologue about cultural assimilation as a closet, about trying to fit in, about not feeling “beautiful for who you are.” The fight is for “the right to love me.”

A table with makeup mirror. A hat rack with feather wrap and wig. A witty, rueful coming-of-age reminiscence by a performer in full makeup preparing to go on stage in drag—along with an ode to lost gay bar culture: “There wasn’t an app for any of it. We need the bars! Put down your Grindr!” As he dons the feather wrap, and wig he says of his impersonation that it is not a way of hiding; “This is a mask that reveals.” A rousing chorus of the song “Finally” tops off the scene.

A touching story about the author’s late father, and how they would go for long walks holding hands. A scene by a lake is evoked simply by the sounds of nature. Once, while they were walking on the road, a vehicle sped by and two men in it shouted at them, “Faggots!” Never letting go of his son’s hand, the father said to him steadily, “Never be afraid to love who your soul tells you to love.”

A theme has emerged during the evening, unspoken but palpable, about parents and their responsibility to heal and make their children whole through love, and in this final piece a playwright and a dancer pull out all the emotional stops. “Where’s that little kid?” the author asks of the young man who shot down those people in Orlando, as the dancer interprets her words in movement. “Where are all the scared young boys?” she asks further, standing at a podium, in a pained lament for the youth whose humanity was never unlocked by the love of a parent. (And suddenly the real-life shooter’s brutal, upbraiding father, never mentioned all evening, has been chillingly alluded to.) The author has two black sons, she tells us. She is determined to save them. Then she becomes the wordless dancer, and the dancer goes to the podium to deliver the message she wants us to know. Just after she thought she had finished writing this piece, he explains, there was another shooting. And then yet another. She can only express her anguish now in movement. She has no more words to write.

Running Time: About one hour 40 minutes, with no intermission.(As is usual with Forum Theatre performances, there was a facilitated discussion afterward.) 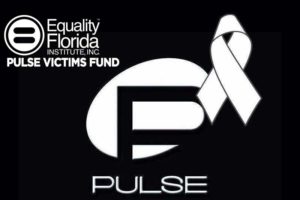 NOTE: A portion of the proceeds from this (Re)Acts event will go Equality Florida for funeral and medical costs for the victims of the Orlando shooting. Donations for that fund may be made here.