From Peter and The Starcatcher to Finding Neverland, the ever popular tale of Peter Pan continues to inspire original interpretations for the theater. A different take on J.M. Barrie’s beloved children’s classic Peter Pan, or, The Boy Who Never Grew Up, Tink!, presented in the 2016 New York Musical Festival, tells the backstory of the familiar characters from the unique perspective of the fairy Tinkerbell, through the growing pains of her teen years “in a time before time was important.”

The new family-friendly musical, with book by Anthony Marino, music by Lena Gabrielle, and lyrics by Greg Kerestan and Gabrielle, bursts with magic and mystery, adventure and romance, with a colorful design, captivating score, and spirited choreography that hold appeal for all ages.

The young fairy is not just the sound of a tinkling bell or a darting spot of light in this coming-of-age prequel, but the focal point of the narrative (Peter, played with childlike charm by Kurt Hellerich, doesn’t even fall from the sky into Neverland until the end of Act I) and a fully anthropomorphized figure with all the qualities of a very human teenager, as captured by Elly Noble in her lead performance. She rebels against her parents (Phillip Taratula and Lauren Elder, who deliver a great Vaudevillian-style soft shoe, with jazz hands, in “The New Royal Tinker”) and the snobbery of the royal fairies (the appropriately condescending Amy Mack, John Paul Almon, and Francesca Arostegui); girlishly confides in her BFF Tiger Lily (Shoba Narayan, with whom Noble shares a smashing duet “Fool Me Twice”) but then ignores her good advice; and is swept away by her first love, the dashing pirate James (the irresistibly seductive Max Sheldon).

Her willfulness leads to near-disaster with the shipwrecked pirates of the Jolly Roger, whose Captain Bart (also played by Almon) reveals a plot-driving secret about fairies and the development of Barrie’s well-known archetypes, including the nefarious Captain Hook.

The show’s thoroughly engaging music ranges from heartfelt solo ballads (Tink’s “A Million Things” and James’s “A Special Kind of Madness”) to full-company blockbusters (“Neverland” and “The Pirate Queen”), with strong vocals and harmonies from the entire cast, backed by a top-notch five-piece orchestra (Music Director/Conductor Josh Walker and Adam Wiggins on keyboard, Jeanette Stenson on cello, Tynan Hooker-Haring on bass, and Beth McElroy on percussion, providing evocative tinker and  bell sounds).

Co-Choreographers Danielle Marie Fusco and Director Rachel Klein, who emphasizes the youthful exuberance of the story, cleverly combine traditional dance and chorus-line high kicks with acrobatics, juggling, and roller-skating, as well as nods to pop music videos by Taylor Swift and Beyoncé. The ambitious movement is spectacular and exhilarating, though the execution is, at present, a bit shaky at times and could benefit from more rehearsal for this work-in-progress; accomplished aerialist Crista Marie Jackson is a standout among the ensemble. The segments of knife- and swordfights are highlighted by a funny bit with the pirate Smee (the lovable Patch David), who gets “carried away” by it all and inadvertently helps to save the day.

Costumes by Tracy Angelo and Lynn Rusnica are an amusing mash-up of Victorian-style pirate gear of Barrie’s era with post-modern glitter and spandex, in keeping with the characterizations of the figures and the cross-temporal approach to the choreography. A simple scenic design by Ann Beyersdorfer, with a backdrop curtain of leafy vines, allows Jamie Roderick’s saturated color lighting, which changes with the scenes and moods, to shine through the open patches.

Now in its thirteenth year, NYMF provides an important proving ground for new musicals. Tink!, which was originally produced by Marino’s Stage Right Theatre Company in Greensburg, PA, has proven itself here! 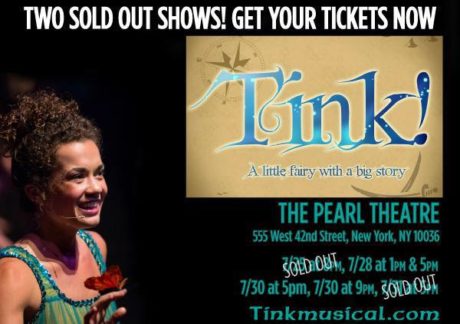