Hoax is the latest collaboration between playwright Annelise Montone and actor/magician Brian M. Kehoe. Montone and Kehoe also starred in the production, and Deirdre McAllister was the consulting director.

Hoax takes place in the downstairs of the Maryland Art Place where an old bar, lantern lights, and speak-easy music come together to create a unique, rag-tag atmosphere. You may be nervous about the dress code, as I was, since the performance information says quite specifically, “please come dressed in your best Mad Men-esque, 1950s-style attire.” But fret not. Tonight the audience was dressed in a full range from casual, wearing flip-flops and a t-shirt, to dressy, a dress and pearls. As we waited for the show to begin, there were show posters on the bar counter and Sharpies, and we were encouraged to doodle on the posters. It was a fun, adorable way to engage the audience and to open up our sense of play.

Hoax follows Maxwell Fink (Brian M. Kehoe), a slightly smug, self-righteous magician, and his surly assistant Sarah Swanson (Annelise Montone). Their exact background, though clear to the actors, was a little foggy to the audience. However, Fink made it clear that in the present he was seeking redemption for his life of deception, and was here tonight – “For one night only!” – to save us from making his same mistakes. For the most part, the obscurity of Sarah and Fink’s past added to the mystery of the show, but it did leave me wondering throughout the show what Fink had done to Sarah to upset her so much.

Kehoe and Montone carried the show with energy and confidence. Montone in particular had a grace and wit about her stage presence that made it obviously more than just and assistant. Throughout the show there were lots of specific moments with difficult timing, which demonstrated how much work must have gone into this performance.

The design elements in Hoax really stood out to me. In addition to starring in the show, Montone and Kehoe also acted as costume and sound designers respectfully. The costume choices were brilliant. At first glance, their outfits looked a little odd because the colors did not all go together. Both were mainly in red and royal blue, but Sarah had teal shoes, and Fink had a teal striped pocket square. When apart, the teal seemed odd, but when they stood together it connected them as a unit and gave them a cohesive look.

Even more impressive than the costumes was the seamless sound design. From start to finish the music and sound effects played under the action and dialogue. Sometimes it would swell up to emphasize a moment, then other times it would fade out completely for a dramatic pause, but it always synced up with the actors perfectly. It was also fun to listen to. My boyfriend who accompanied me said, “I want the soundtrack to this show!”

Scenic Designer Harley Winkler also did a wonderful job at setting the tone of the show. The set was simple and effective. A large curtain separated the bar area from the stage area giving it a sideshow-like feel. The elements on the stage, the gold backdrop curtain and brightly colored boxes, were simple enough not to be distracting, but were bright and exciting enough to add to the charisma of the overall production. And whether it was part of Winkler’s design, or light designer Alec Lawson’s idea, the globe string lights about the stage were a delightful touch.

Overall, Hoax was a fun evening out. The magic and illusions were entertaining and all of the audience participation really drew me in. Fink continuously said that he was deceiving and lying to us, but the tricks were still puzzling and a tad mystifying. He even put a bit of a spin on the classic spoon bending by doing it three different ways so you never quite saw exactly how he was doing it. Finally, they wrapped things up with a bold closing move. I won’t spoil it, though. You’ll have to see it for yourself. 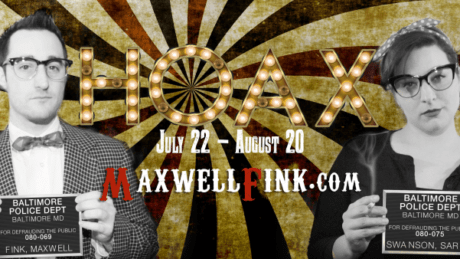