About halfway through Ray Didinger’s new play Tommy and Me, one of the characters mentions Joe Kuharich. On the night I attended the play, the audience responded with a round of derisive laughter.

So, who was Joe Kuharich? He was a 1960’s Philadelphia Eagles head coach who drove the team so far down in the NFL rankings that it took them more than a decade to recover. A lot of people have forgotten Kuharich, but not diehard Eagles fans. They’re tough, and they never forget a rivalry or a grudge.

But Eagles fans never forget their heroes, either – whether that hero was Ron Jaworski, or Brian Dawkins, or, for an earlier generation, Tommy McDonald. Tommy and Me, Didinger’s funny and heartwarming new play, tells the story of one of the game’s unsung heroes, and celebrates the bond that sports heroes have with their fans.

McDonald was the NFL’s top receiver during the 1950s and 1960s, and he scored the game-winning touchdown for the Eagles in the 1960 NFL Championship Game. Yet despite his talent and tenacity, he spent much of the sixties bouncing from one lousy team to another. By the time he retired in 1968, despite his impressive statistics – he was then ranked second in all-time touchdown receptions – he was largely forgotten by the football establishment.

But Didinger never forgot him. As a child in the fifties, Didinger spent summers at the team’s practice facility and got to know his idol. Then in the eighties and nineties, when he’d become one of America’s best and most famous sportswriters, Didinger waged a one-man campaign to get McDonald into the Pro Football Hall of Fame.

You can probably guess how that battle turned out. There’s not much suspense in Tommy and Me. But there is a lot of warmth and humanity radiating from the stage, as Didinger and Director Joe Canuso chart the close bond between the two men.

As the well-constructed play jumps back and forth in time, we see Ray as a child, bursting with enthusiasm, alongside an adult version of Ray who tries to present a façade of journalistic impartiality. The adult Ray insists he can’t approach his interviews as a fawning fan, while Young Ray serves as a needling reminder of why Ray got into the business in the first place. As Ray sits calmly and asks his idol Tommy a series of mild questions, Young Ray sneers at his adult self, “Sometimes I can’t believe I grew up to become you.”

It was McDonald’s combustible energy on and off the field that earned him a strong following, and Tom Teti captures that dynamism perfectly. Teti is loud and boisterous, putting on a show for the world, while also showing how doubtful and wistful Tommy felt about his legacy during private moments.

Matt Pfeiffer is reserved but charming as Ray, while Simon Canuso Kiley, as Young Ray, pulls off the difficult trick of seeming spunky and insistent without becoming overly precious. Ned Pryce rounds out the cast as Young Tommy in the flashback scenes, giving him an air of toughness and compassion.

Thom Weaver’s set design and lighting are understated, suggesting Ray’s office and Tommy’s living room with a modesty that suits the two men perfectly. Michael Kiley’s sound design summons up the echo of a cavernous stadium at just the right moments. And Michael Long’s video design, projected on a series of doors and mini-screens hanging above the stage, uses vintage film clips that enhance the story without overpowering it.

Score several touchdowns for Theatre Exile’s Tommy and Me. Philadelphia Eagles fans will love it!

Running Time: 75 minutes, with no intermission. (Many performances are followed by talkbacks with Ray Didinger and the cast.) 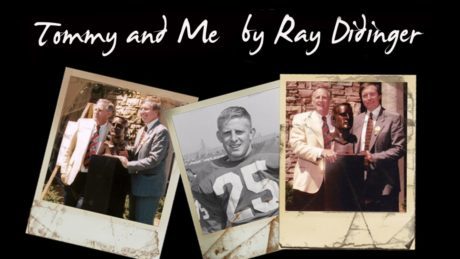 LINK:
Ray Didinger and Joe Canuso Kick Off ‘Tommy and Me’ at Theatre Exile in Philadelphia by Deb Miller.