In Part Three of a series of three interviews taking you behind the scenes of Lower Shore Performing Arts Company‘s production of Breathing Under Dirt, meet actors Robert Forester and Tina Sloan.

Cynthia: Why did you want to be part of the cast of Breathing Under Dirt?

Robert: I wanted to be a part of this great cast and to work with such talented actors whom I had watched and admired for years on television. The play itself is just wonderful and to be asked to be in the premiere cast is beyond exciting.

Tina: I felt the play was so brilliant and I would get to work with such great friends.

What has been the most exciting thing about performing in a world premiere play?

Robert: Getting to work with these actors from Guiding Light and becoming friends with them has been exciting. Creating something new with them that has never been performed before is also thrilling.

Tina: Well, I have been in other world premieres, but it is always exciting to be at the start of something as wonderful as this play.

Who do you play in the show? How do you relate to him/her?

Robert: I play Patience – Malarky’s father. He is basically a good man, but has a great deal of flaws and did the best he could at the time.

Tina: I play Grace. She is the mother and I relate in that I am a mother. But otherwise, she is my opposite; very southern, very religious and widowed from a man she didn’t like. Grace is bitter and sad from all she has lived through.

How can today’s audiences relate to your character and to the show?

Robert: The play has a universal appeal. We all have families about whom we might carry around inside us unresolved issues or resentments.

Tina: Oh, Grace is covering up great pain with sarcasm. She is aching all over from her age and arthritis, so many will be able to relate to her.

What have you learned about yourself the actor during auditions and rehearsals?

Robert: I have learned working with Michael how much backstage work there is in producing a new play.

Tina: What fun it is to act and be involved with friends in a production!

What scene in the show that you are not in moves you the most? And why?

Robert: I really like the last scene in the play. Tina and Cynthia are going to hit every note and hit it out of the park.  It’s just a really lovely scene.

Tina: The scene with Patience and Jack where her eyes are opened. It is a surprise scene and so scary!

Describe Breathing Under Dirt in 5 words or less.

Describe your character in 5 words or less.

Robert: A flawed but loving man.

What do you admire most about your fellow cast members’ performances?

Robert: The amount of experience and dedication they each bring to this project and the sense of family they feel for each other.

Tina: Their complete joy in performing and generosity to every cast member.

What was the best advice your director and playwright gave you that helped to improve and shape your performance?

Robert: Michael told me I brought a lot of sensitivity to the role.

Tina: Grant told me I am such a very, very nice person in real life, but I can’t be in this play. It was that easy to turn me into a “bitch.”

What do you want audience members to take with them after seeing you perform in Breathing Under Dirt?

Robert: I hope the audience will be moved to think about relationships in their own lives and if there might still be time for forgiveness.

Tina: When they leave, I hope they see more clearly how keeping secrets from one another causes such pain and misunderstanding and by carrying the pain with them, they may be unaware they are covering it up with bitterness, alcohol, food, work etc.

Robert: I will be directing the Agatha Christie murder mystery, Murder on the Nile, for the Lower Shore Performing Arts Company.

Tina: I will either be doing this play Breathing Under Dirt elsewhere or my own play, a one-woman show I wrote called Changing Shoes that I have been doing all over the USA for the past 7 years. The next stop for my play is Paris, France. That will not be till next summer, so hopefully I will be doing Mikey’s play! 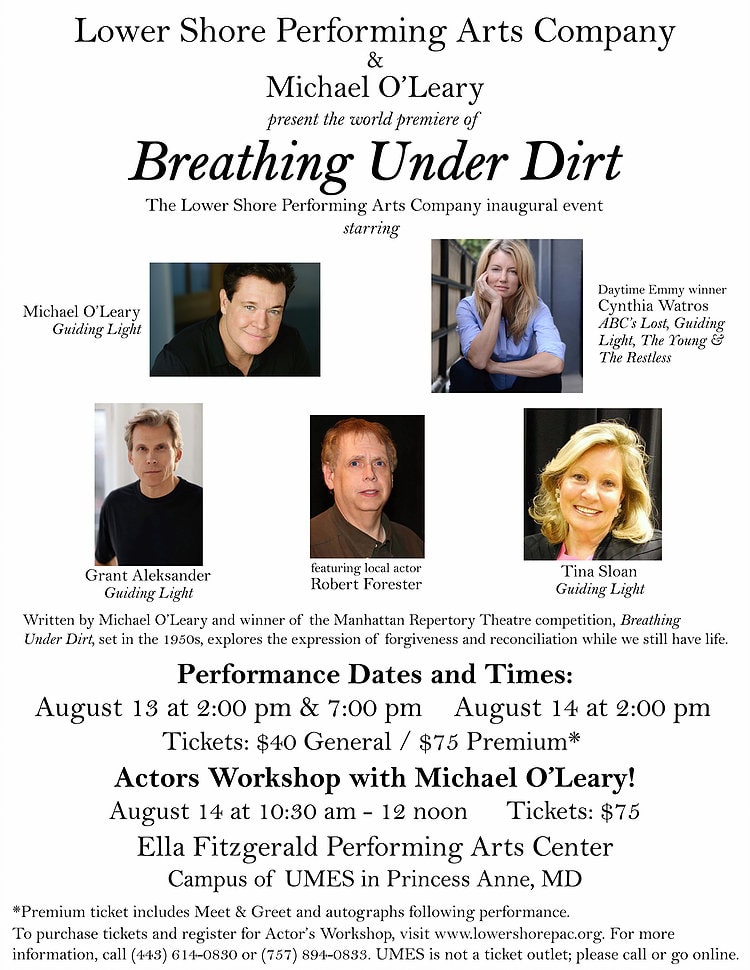 OTHER EVENTS:
Michael O’Leary is conducting an Actors Workshop on Sunday morning, August 14th at 10:30 AM also at the Ella Fitzgerald Performing Arts Center. For tickets, to Breathing Under Dirt purchase them online. Premium tickets include priority seating, meet-and-greet and autographs after the show.

There is a Meet & Greet on August 9th at 6:00 PM at Market Street Inn –130 West Market Street, in Salisbury, MD. More details are on Facebook.