All is dark. All is silent. Then, thunder rumbles. Lightning strikes. A boat is caught in the middle of the storm. The sailors frantically run about, making any and all attempts to save themselves, but it is to no avail. Before the sun rises, one man is spotted clinging onto the broken mast for dear life as some ethereal being stands guard over him.

Thus begins Shakespeare Theatre Company’s production of the Bard’s final play, The Tempest. Directed by Ethan McSweeney in 2014 and revived for the theatre’s annual Free For All, this production does it all: enchanting the senses, tickling your funny bone, and moving your heart.

The play concerns the machinations of Prospero (Patrick Page), the deposed Duke of Milan now residing on a small island with his teenaged daughter Miranda (Rachel Mewborn). Having gained mystical power over the elements, he hopes to exact revenge on his traitorous brother Antonio (Gregory Linington) and his accomplice Alonso (Edward Gero) as a trick of fate brings their ship within Prospero’s grasp. Add in a spirit, a monster, true love, and two drunken fools and you will be immediately transported into a world where magic and mystery reign supreme.

McSweeney is no stranger to Shakespeare Theatre Company, having also directed and revived last summer’s Free for All production of A Midsummer Night’s Dream. His Tempest takes its strength from the dynamic contrasts he creates between characters, colors, moods, and movement. By seamlessly weaving the ingenuity of design and power of the performances together, he opens the audience’s eyes to the heartbreaking beauty of the story.

Any Shakespeare play presents a unique set of challenges and this troupe of actors more than rise to the occasion. Page as Prospero is simply put, a triumph. With a baritone as deep and roaring as thunder, he is captivating as his stormy eyes crackle with rage one moment and soften with paternal affection the next.

Mewbron as Miranda is a delight to watch as her childlike innocence not only wins over Ferdinand (a charming and evocative Avery Glymph) but the audience as well. Topham (Ariel) dazzles as she soars across the stage even as she remains quite literally tied by Prospero’s magic. Duncan delivers a multi-faceted and nuanced performance as Caliban, brimming with righteous anger towards Prospero and seeking a new master to take control of the island.

Enter the drunk butler Stephano (Dave Quay) and the fool Trinculo (Liam Craig). The duo mines every line for maximum comic value and leave the audience in stitches, cheering for more.

The “rough magic” of the play is brought to life by the designers in a veritable feast for the senses. The set by Lee Savage is stark in its color, but perfectly captures the desolation of Prospero as the stage is covered with over 5 tons of sand.

The costumes by Jennifer Moeller offer a similar palette of whites, greys, and earth tones that provide a stark contrast for the detail and adornment in the court garb of Antonio, Alonso, and their men.

Lighting by Christopher Akerlind is simple, yet highly effective in conjuring this strange and wonderful land. Last but not least is Puppet Designer James Ortiz, whose massive and stunning creations are the highlight of an enchanting night at the theatre.

A tradition for over 25 years, Free for All is a fantastic way for people of all ages to experience Shakespeare’s genius at an unbeatable price.

This year’s offering embodies everything that the theatre should be: engrossing, moving, and magical. The Tempest delivers on all levels and is not to be missed!

Running Time: Two hours and 20 minutes, with one 25-minute intermission. 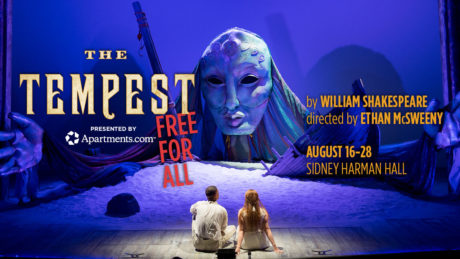