From the time she was a kid, Ronna J Levy knew that she wanted to be an actress. How she ended up being a teacher is the theme of her original one-woman show of 2012, This Gonna Be on the Test, Miss? Combining true stories and real-life characters from her community college classrooms with cogent observations on the American educational system, socio-economic class structure, and diverse demographics, Levy traces her transition from aspiring artist to impactful educator in a revealing auto-biographical reflection on the past 20 years.

Directed by Tyler Spicer, Levy’s delivery is slow and deliberate, as she manifests her disappointments and frustrations, then begins to recognize her newfound skill, growing list of achievements, and personal satisfaction in making a difference in the lives of the people she inspired in her adult-level Remedial English classes in Los Angeles and New York. Along with conveying her own first-person narrative, Levy assumes the accents and demeanors of the students and colleagues she encountered along the way, as she ponders “Who are these people” and wonders “Why are they there?” She not only comes to understand the answers to those questions, but also to re-evaluate who she is and why she is there.

Levy’s solo performance on a bare stage is supported by video projections by Ian McClain of the personal notes, photos, and memoirs she kept, by the actual notebook in which she compiled entries on her experiences, and by the sobering statistic that only one in three students attending  community colleges across the US go on to graduate.

This Gonna Be on the Test, Miss? is an engaging and illuminating self-portrait about finding one’s true calling in the most unexpected of places. It also represents a happy fulfillment of Levy’s dream of becoming a successful actress–as well as a playwright, and an affecting teacher. By all counts, that’s win/win/win—not just for her, but for her students and audiences as well. 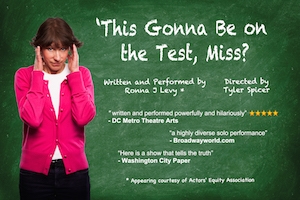 LINK:
Capital Fringe 2014 Review: ‘This Gonna Be on the Test, Miss?’ by Marlene Hall. [Best of the Capital Fringe!]