Relationships are hard. And that goes double if you’re pushing 30, but still haven’t made the psychological and emotional transition from youth to adulthood. In The New Collective’s world premiere of Steve Got Raped, emerging playwright Sam Gooley considers the burning issues that plague a generation on the cusp of overdue maturity through the relationship of one engaged couple that is unable, or unwilling, to communicate, to commit, and to be honest with each other, or with themselves.

On the day of Steve’s bachelor party, he and Katie get some unexpected news that they’re not quite sure how to handle. That is followed by a pivotal sexual encounter at Steve’s party, thrown by his hedonistic best friend Derrick, and a provocative ‘he said/she said’ confrontation with hired stripper Ariel, which finally force them to do some much needed self-examination and reconsideration of their behavior, their attitudes, and their future, both together and apart.

As directed by Melissa Firlit, Gooley’s narrative is effective in conveying the uncertainties that the immature, and largely unlikeable, characters feel but have trouble expressing, as they move into a new phase of life for which they’re clearly not ready. The show also succeeds in staging a provocative and balanced conversation about whether or not a man can truly be raped by a woman. While there are some unbelievable situations and stilted dialogues between the betrothed couple (Would two people about to marry never have discussed their interest in having children? 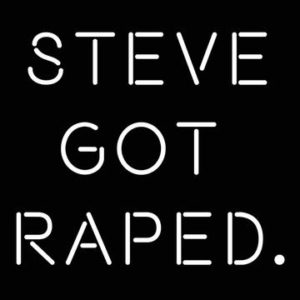 Would a man really want to skip his own bachelor party and a woman adamantly insist that he go, to look at the “fake boobies” of strippers? Would her BFF never have mentioned her dating history?), those passages serve in advancing the plot points and highlighting the underlying ambivalence of the protagonists.

James E. Smith stars as the troubled and uncommunicative Steve, and Sarah Moore is Katie, whose joking turns to rage as her fiancé confesses his disquieting and ultimately cathartic secrets. Despite a lack of chemistry between the two actors, they deliver the emotional turmoil and ambiguities inherent in their individual roles, slowly coming to the realization of their true feelings and showing some development in the climactic scenes.

Supporting actor Dan Morrison is laughably annoying as the obnoxious fixated adolescent Derrick, and Mara Gannon makes for a tough Ariel, who forces a reality check on the less-than-forthright and self-delusional Steve (after he earlier acknowledges that “rape is so hard to define”).

Though described as a “dark comedy,” the issues raised in Steve Got Raped are not all that funny, but they are seriously relevant for a generation belatedly coming of age.