Seeing American icon in concert Don Henley is a must! He is Americana at its best! A musician to the core, his musical craftsmanship holds up to the test of time. A founding member of one of the most successful musical acts ever, The Eagles, his show mixes in music from his new solo album in 15 years – Cass County – that landed on top of Billboard, The Eagles and his solo career spanning 40 years. 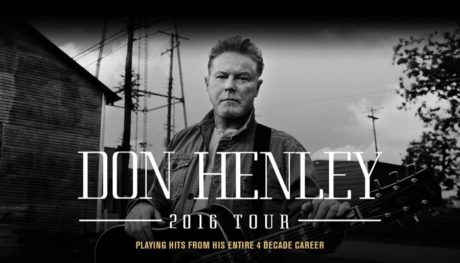 Setting a warm nostalgia feeling, the stage included 40 old time radios hanging above. Before the show started, strobe lights highlight a different radio and portion of songs from the earlier generations would play from Elvis Presley to big band.

The stage darkened and the sold-out crowd rose to its feet, clapping their hands, whooping and hollering and then the lights shone on Don Henley in the center microphone and 5 singers in a semi-circle. They richly sang “Seven Bridges” a cappella. Talk about chills! His band encompasses 15 musicians when including the brass section. Henley quipped about the band, “It’s not profitable, but it sure is fun!”

Henley looks fit and trim in his jeans and sounds ageless. He sang beautifully in falsetto and high notes with ease. The whole feel of the stage is Texas with the three female back-up singers wearing flowing summer prairie dresses, many of the men musicians wearing top hats and jeans. Henley joked about one of his musicians wearing what looked like a miner hat, “We heard some noise in a mine shaft in Nevada and pulled him out and this is what we got, gold!”

They then launched into “Dirty Laundry” one of my favorites! Watching the back-up singers choreographed swaying added to the mood of the song. The songs through out the night sounded just like the original recording. How do they do that? The crowd especially loved the older hits with the Eagles and Henley’s solo songs.

Henley comes across as passionate, folksy, down to earth, kind and humble. During guitar solos and other instrumental solos, the strobe lights dimmed on him and brightened on the other musicians. Toward the end of the show, his three strong back-up singers, Lily Elise, Lara Johnston, Erica Swindell took center stage, while he took a break, to sing “I Don’t Want to Hear Anymore.” Henley almost seemed like a proud father or a concert promoter propping these talented ladies through out the show, doing duets with each one of them as well.

He explained, through out the show, whimsical facts while sharing his humor. “My new album Cass County is named after where I grew up in Cass County in Northern Texas. Cass was a man with clout and had several counties named after him. He was Secretary of War under President Jackson.” Henley described the excitement as kids, putting nickels or pennies on the railroad tracks and collecting them after the locomotives seared them. “Back then, no one cared if you did that, now days they do!”

“Shangri-la” is a powerhouse song that invoked all 15 members of the band and showcased the talent of the whole band. Steuart Smith, original of Alexandria, VA killed it on “Hotel California” with his guitar solos. I could listen to it all day.

Touchingly Henley dedicating “Desperado” to his Eagles’ brother Glenn Frey that died earlier this year. He thanked the crowd for their warm condolences on his loss as “it is much appreciated.”

Thankfully, Henley stayed out of politics, but he surprisingly launched into “Rule the World” by Tear for Fears in honor of the crazy political festival swirling around us.

He closed out the night with a medley of hits that got the crowd on its feet.

The song list:
“Seven Bridges”
“Dirty Laundry”
“Sunset Grill”
“Witchy Woman”
“Words Can Break Your Heart”
“One of These Nights”
When I stop Dreaming
“NY Minute”
“Shangri-La”
“Bramble Rose”
“It Don’t Matter to the Sun”
“I Don’t Want to Hear No More”
“End of the Innocence”
“The Last Resort”
“Train in the Distance”
“Heart of the Matter”
“How Bad Do you Want It”
“Rule the World”
“Boys of Summer”
Encore:
“Fastlane”
“All She Wants to Do is Dance”
“Hotel California”
“Desperado”

Running Time: Approximately two hours and 30 minutes, with no intermission.

Don Henley played for two nights on September 7-8, 2016, at Wolf Trap’s Filene Center – 1645 Trap Road, in Vienna, VA. For tickets to their upcoming events, go to their calendar. For tour dates and tickets visit the band’s website.