What happens when you put together famous improv comedian Colin Mochrie, Canadian comedy troupe The Second City, and the National Symphony Orchestra?  A night of music and sketch comedy at the John F. Kennedy Center, that’s what. Created in 2014 and touring North America for the 2016-17 season, The Second City Guide to the Symphony makes its stop at the Kennedy Center for a night audiences won’t soon forget.

Colin Mochrie introduced The Second City, the National Symphony Orchestra (NSO)—“lovely people who look like they are dressed for the prom”—and, most importantly, himself. He proceeded to riff on subjects ranging from the wealthy D.C. patrons in the audience (“the sweet scent of disposable income”) and the standing ovation Conductor Steve Reineke’s entrance received, to the recent successes of presidential candidate Donald Trump. Reineke, who returns for his sixth season as principal pops conductor of the NSO at the Kennedy Center, did not hesitate to speak up as well, surprising the audience with his knack for comedy.

The Second City ensemble (comprised of Carly Heffernan, Matt Baram, Ashley Botting, Marty Adams, Allison Price, Kevin Vidal, and occasional guest star Colin Mochrie) began performing in earnest for its opening number, “Big Opening Number,” a Broadway-esque ensemble piece accompanied with the full force of the National Symphony Orchestra. What followed was a raucous first act featuring sketches such as “First Date,” where a man tries to bluff his way through a first date with a woman who has loved the symphony since her first visit to Prague.

The NSO had a more prominent role in the sketch about Gustav Mahler’s attempts to make it in the advertising biz, or in “Meanwhile in the Foyer,” where they became the soundtrack to a middle-class office worker’s life. And just when we thought the NSO was merely there to enhance Second City’s sketches, the comedy troupe left the stage for the overture from Mozart’s The Marriage of Figaro—reminding the audience that this is a top-tier orchestra.

Audiences were not spared: in addition to a sketch devoted entirely to examining different types of symphony-goers (the overanalyzer, the season ticket holder, etc.), audiences were sometimes called upon to make suggestions for pieces of improv or to join Second City onstage for a minute or so.

The second act, too, had its highs, including the NSO’s performance of a piece from Glinka’s Ruslan and Ludmila and Carly Heffernan’s moving performance of “Love Song,” about forgetting all of life’s hardships while listening to the symphony—supported, of course, by the NSO itself. Other moments, however, did not work as well, such as a rap battle between two of Bach’s sons – that might have been less jarring with clearer acoustics – and without the addition of a stereotypical hillbilly character who popped up several times.

Writers Carly Heffernan, Scott Montgomery, Matthew Reid, Klaus Schuller found a way to join together seamlessly, for a night, a comedy troupe and an orchestra, going so far as to have the ensemble and the orchestra improvise a song together during Act II. Director Chris Earle arranged these sketches and musical pieces with all the finesse of an orchestra conductor, leaving the audience laughing even as they headed for the door. And, in many cases, with a sudden desire to go to the symphony. 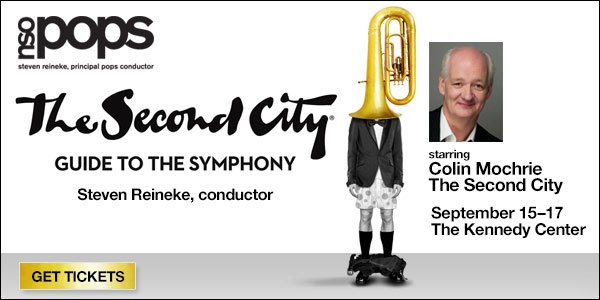