“Before I die I want to _________?” A serious question that I had to answer at Tongue & Groove’s Fringe show. Before I Die is an interactive show that asks audience members what they want to do before they pass. I had to write my answer on a provided notecard and then drop it into a bucket. My particular card was never chosen but throughout the show, at least a dozen cards had been read and used by the ensemble on stage. The ensemble members then took the answers on the cards and created improvised scenes around them, making each show unique to that specific audience. 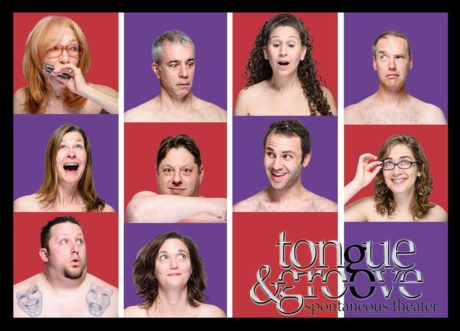 Tongue & Groove was founded by Bobbi Block, who is also an ensemble member in the show. Other company members from the show I saw included Beth Dougherty, Ed Miller, Noah Herman, Seth Reichgott, and Fred Siegel. This group of people has been doing improv with each other for years and I could tell by watching them on stage.  They supported each other and always seemed to be on the same page. If a scene started to drag or got stuck in a rut, another member would not even hesitate to come on stage and start a new scene. The show flowed well and its unscripted nature kept me on the edge of my seat because it was impossible to know what would happen next.

Since this show is an improv show, there is no script.  There are no costumes, no set, no special lighting. It is witty, smart, and I walked away watching a show that was specifically built just for my fellow audience members and I. The ensemble created beautiful scenes of sincerity and compassion and also created ridiculously hilarious scenes that were outrageous and wacky. It was good old-fashioned fun and I couldn’t help but sit there and secretly hope that my card would be the next one to be drawn. What do you want to do before you die? Add to that list… see this show.

Before I Die plays through September 24, 2016 at the 2016 Philadelphia Fringe Festival at Tongue & Groove performing at The Playground in the Adrienne Theater – 2030 Sansom Street, in Philadelphia, PA. For tickets, purchase them online.