Oh my God, ohmigod you guys, looks like this show is going to win the prize. Legally Blonde: The Musical, now playing at the Fauquier Community Theatre (FCT) is like a non-stop party, a party with all of your friends and no question at all about whether or not you’ll have a great time.

Legally Blonde: The Musical, original music and lyrics by Laurence O’Keefe and Neil Benjamin, and original Book by Heather Hach, is directed by Evelyn Rice/ who put together a cast and crew that show how much fun a musical can be.

FCT begins their productions by reminding the audience that all of their cast and crew have day jobs, as this is a community theatre, but the showmanship, the set design, and the overall respect the cast and crew had for this show left me feeling like I had just come out of a Broadway production.

Set Designer and Master Carpenter Bill Spiedel, created a set of many moving parts, perfectly changed quickly through a group of fantastic stage hands. Lighting Designer, Jinxv Clark, allowed the small stage to create multiple scenes at one time, keeping the audience focused on the action while the other scene was being dismantled. 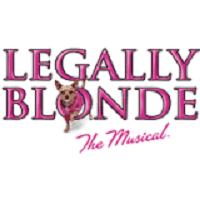 The stage crew, led by Jay Wells, seemed like practiced veterans moving quickly and quietly throughout the show, changing the show rapidly from the Delta Nu sorority house to a hair salon to Elle’s dorm room at Harvard. Costume Designer Heather Love does an amazing job of picking and making clothes that fit the characters and shine on stage. The crew worked just as a crew should, interconnected and unseen to the point where the show could run smoothly.

The story of Elle Woods, played in this production by Dominique Herring, is the perfect ode to being ‘you,’ no matter how high the stakes. Herring does a flawless job of encapsulating Elle Woods and all of her blonde glory. One of her big numbers, “So Much Better” really demonstrated her energy. I wanted to see this girl get to the top at Harvard Law and I was not disappointed.

Elle’s counterpart is Emmett, played by Brandon Leatherland, Leatherland is the perfect complement to Herring, with a strong but sappy and romantic voice. When he sings “Chip on My Shoulder” Elle and the audience are all reminded to be stronger than what the world thinks we should be. While one of the funniest actors in this show, it is this song of pride that really shows off what this young actor can do.

Michael Golder, playing Warner, offers some of the most laughs, especially in his song “Serious,” where he seriously left me and the audience in stitches. Rodrigo Pool, playing Professor Callahan, is such a fantastic jerk that you will be loving and hating him in equal parts. His showstopper “Blood in the Water,” had me completely captivated and had this reviewer thankful she never went to law school.

Rebecca Lake, playing Paulette, shows just how important friendship can be. She helps Elle remember how awesome she is and in doing so shows off what an amazing character she really is. Lake displayed beautiful vocals singing “Ireland.” Her leading man -the UPS Guy, Kyle, played by Ricky Parks, is a perfect match for Lake, making sure the show is filled with humor with a well-placed wink and a strut throughout all of his scenes. A wonderful moment occurs when Parks begins Irish Step Dancing with Lake during the song “Legally Blonde.”

Betsey Hanseng plays the bitchy Vivienne with venom. Because the characters changes as the show moves along, Hanseng gave a multi-layered performance and showed some wonderful vocals on “Legally Blonde Remix.”

Brooke, played by Music Director and Choreographer Alanna Mensing, shows off not only her amazing dance skills but her athletic abilities during her act two opener “Whipped into Shape.” She dances, sings, jumps rope, and defies many laws of gravity during this scene all without losing her breath. I would be happy to take a fitness class from this fitness guru.

The “Greek Chorus” (because all shows need a Greek Chorus), led by the Delta Nu Sorority girls: Carleigh Hopkins (Margot), Rachel Davis (Serena), and Hannah Butler (Pilar), all show off amazing vocal range and incredible dance talent. In both “What You Want” and “Bend and Snap” I was captivated by these sorority girls. Their voices perfectly blended and their choreography, by Alanna Mensing, is seamless. They enhance every scene they are in and make the show even more enjoyable.

The ensemble cast is one of the parts that make this show so great. It’s a large cast and every single actor in this show proves that when you love to do something it shows, especially on stage.

Running time: Two hours and 30-minutes, with a 15-minute intermission.