Filled with poetic language, engaging characters, and penetrating insights into the human condition, Brian Friel’s Molly Sweeney represents the tradition of Irish storytelling at its very best. Told in the format of rotating direct-address monologues, the funny and heartrending three-hander requires a director and cast who can deliver all of the humor and pathos, hope and despair, enthusiasm and pain, and joys and hardships inherent in life, as reflected in Friel’s masterful, and very demanding, script. Irish Heritage Theatre’s current production–directed by Peggy Mecham and starring Kirsten Quinn, Ethan Lipkin, and Michael Toner—does it beautifully, with thought-provoking acuity, profound sensitivity, and genuine humanity.

The two-act narrative revolves around an operation intended to restore the sight of the eponymous 41-year-old character, blind since infancy. Though Molly has enjoyed a happy, self-sufficient, fulfilled life by relying on her acutely developed senses of touch, smell, taste, and hearing, Frank, her husband of two years (“the most enthusiastic man I ever met!”), thinks that she would be better off if she could see. He engages the services of Mr. Rice, a formerly respected ophthalmologist, to perform the life-altering surgery. As the three consummately human characters alternate in relating their interweaving versions of the events to the audience, they reveal the complexities of their backstories, motivations, and psychology, expose their common need for acceptance, and lay bare the fundamental difference between “seeing and understanding.”

Quinn brings a full range of emotions to Molly, poignantly conveying her delight, resignation, rage, panic, and trauma, as she transitions from a lovely independent woman who is fully at peace with her situation, to a dutiful wife who goes along with her husband’s plan and is forever changed. Lipkin is a bundle of energy as the self-educated Frank, laughably adventurous and wildly excited about the “fascinatin’” research he does, but misguided in its aggressive application and unaware of the lasting effects it could have. Toner is a study in depression and regret as Rice, who turned to drink at the age of 32, when his wife abandoned him for a colleague. We see his initial compassion for Molly give way to his desire for renewed fame and redemption, by agreeing to perform the risky operation.

Under Toner’s skillful dialect coaching, the ensemble’s perceptive portrayals are well supported by credible accents and speech patterns, and their characteristic movements are expertly blocked by Mecham, who also provided their defining costumes. Eric Baker’s spotlighting gives focus to each monologue, and a simple mostly bare-stage set design by Teddy Moseanu reinforces the intimacy of the story and the specific personalities, with a basic wooden seat for the earthy Frank, an upholstered armchair for the pompous Rice, and an elegant rocker with an embroidered bouquet for Molly, who was taught by her father to recognize, and to relish, the scent and feel of flowers in her childhood garden.

Seeing IHT’s affecting production of Molly Sweeney will make you understand that sight does not always provide insight, or enable you to see the value of what you have. 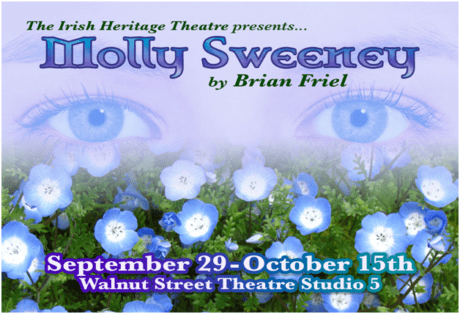