Imagine the shock of the Provincetown Players of 1920 when they received the script for The Emperor Jones. The play contains a monumental role for a “negro” actor, and hundreds of roles for others such a “third haunt” and “ four formless little fears.” Nonetheless, this masterful concoction has been a challenge to directors and actors of vision. It is the Everest of creativity.

The story involves Brutus Jones, a former chain gang prisoner, gambler, and Pullman Car Porter, who, by a combination of charisma, narcissism, strength, and cleverness has become the strongman emperor of a Caribbean Island, similar to Haiti. After a challenging two-character scene, which delivers all this exposition, the drums of the revolution sound.  Jones escapes to the jungle and begins a phantasmagoric descent as the jungle (or is it his own mind?), gradually destroys him. He revisits the chain gang, and even witnesses a ghostly slave auction. Jones retains his fanatical strength because he believes he can only be killed by a silver bullet.

The production at South Camden Theatre Company, directed by Connie Norwood, lacks any interpretation. The sets (plywood bushes and burlap rocks), the costumes (black leotards and band jackets) and lighting (adequate), all lack specific direction. Are the visions the result of Jones’ madness, or is the jungle really magic? Either choice would result in strong choices in design. Frequently, extensive choreography and expressionistic lighting are used to create the emperor’s visions. This might be effective. Jones’ tormentors are all played by three actors who are given no characters to play. Some creative thinking might make these roles more memorable.

The music, especially the voodoo drums, must drive Jones, and the audience, mad as the play hurtles to its conclusion. Traditionally, live drummers are placed in the theater and under the stage to create the necessary atmosphere. Last night’s tinny recording was ignored by all, including Jones. Are there any Camden drummers who could help out?

Maurice A. Tucker’s performance displayed little charisma and appetite that would make it believable that he could mold himself into a strongman king. The last hour of the play is essentially a long monologue as Jones is assumed by the jungle. This requires an actor of infinite variety, who can sustain the suspense. Tucker is essentially the same as the various visions plod by. He might react differently when he sees the slave auction or when the monsters (rather harmless hand puppets) begin to appear. Most important, he needs to carefully delineate the physical and mental specifics of Jones’ disintegration, to give the evening forward movement and excitement. 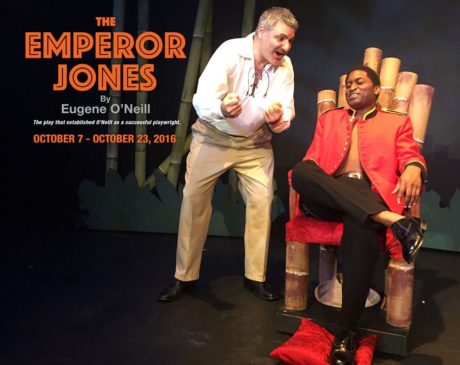 The first dialogue scene between Jones and his flunky/assassin Smithers (Paul Sollino) is quickly shouted with almost no blocking to illustrate the various transitions. As a result, the audience may be confused on major points of exposition. The actors need to realize that they MUST help the audience understand the story. These characters have a complicated love-hate relationship that needs to be deepened and emphasized.

Our performance was definitely under-rehearsed. The three performers who play Jones’ demons had great difficulty moving the set pieces as the performance ground to a halt. The few special effects needed help as well. At one point last night, a small amount of stage smoke was released.  This set off the theater’s fire alarm, which evacuated the tiny audience to the rainy street, as what seemed like scores of fully equipped firemen rushed the stage to save us. Any experienced theater person knows that these things happen.  It’s part of showbiz. I am confident that these issues will have been corrected for the next performance.

The Emperor Jones plays through Sunday, October 23, 2016, at South Camden Theatre Company-400 Jasper Street in Camden, New Jersey. For tickets, call the box office at 866-811-4111 or purchase them online.