In Part 2 of a series of interviews with the cast of Peace Mountain Theatre Company’s A Delicate Balance, meet Louis Pangaro.

Joel: Please introduce yourself and tell readers where they have seen you perform before on local stages.

Louis: I am Louis Pangaro, playing Tobias in this production of A Delicate Balance.

Most recently I have played Leonardo in Much Ado about Nothing at Silver Spring Stage, the Captain Lewis in The Iceman Cometh at Quotidian Theatre. I have done a lot of Shakespeare at Cedar Lane Stage and other local theaters.

Why did you want to be part of the cast of A Delicate Balance?

I have always loved Albee’s writing for characters, and thought it would be quite a challenge to keep under the surface, for the most part, all the emotions that are more explicit and on the surface in Shakespeare. I also wanted to work with Director Laurie Freed, and the other actors in the show, whose work I have admired.

Who are you in the show and what is your relationship to the other characters?

My character is Tobias, a retired businessman, and the action takes place in the home where I and my wife, Agnes, have lived for many years.

With Edward Albee’s recent passing, how does it feel to be working on one of his masterpieces?

The recent death of Edward Albee led to a lot of pieces in the newspaper and on television, which gave me a chance to think again about his writing, and especially his uncompromising approach to his characters. He sees his characters flat on, without any moral squint.

What do you think Edward Albee’s legacy should be? And how would you define an ‘Albee’ play?

He explores the limits of human relationships – and the “limits” are where his characters often are: Who’s Afraid of Virginia Woolf, A Delicate Balance, Seascape, and The Goat. Arthur Miller does this in the context of society, but Albee in the context of a family.

Have you appeared in any other productions by him?

What do you want audiences to take with them after seeing A Delicate Balance?

Most actors don’t want the audience to take away any “message” from a performance; and each member of the audience may take away something different. If our show prompts thoughts or feelings, then we have done our job of serving the script. 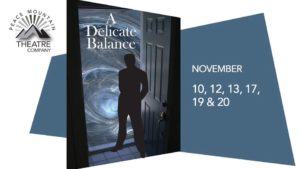 A Delicate Balance plays from November 10-20, 2016 at Peace Mountain Theatre Company performing at Congregation Har Shalom – 11510 Falls Road, in Potomac, MD. For tickets, purchase them at the door or online.

Bringing ‘A Delicate Balance’ to Potomac: Peace Mountain Theatre: Company will produce the Edward Albee play in November by Ashley Claire Simpson in The Potomac Almanac.