A quick but firm handshake, a genuine embrace, a passing glance to own the room and most of all a nudge, wink and leaning in to make me feel welcome; I have met my first candidate and I haven’t even cleared the lobby.  A greeting at the door and the first hint of the hilarity that stays for the whole evening in POTUS Among Us, a show devised by the longform improvisational company, Washington Improv Theater (WIT). Directed by Artistic/Executive Director Mark Chalfant and theater artist Melanie Harker, POTUS Among Us delivers on spontaneous good fun while capitalizing on familiar characterizations we know only too well.

The ten cast members provide candidate characters with a hefty display of the patriotic and a substantial dose of political process. The show is tailored by the unpredictable, dependent on whoever makes up each night’s audience, and the voluntary input that influences which candidate moves forward.

Aaron Mosby, as the show’s combination debate moderator, news cycle commentator, masterfully steers the candidates through a mini version election cycle. With a broad smile and an encompassing look-you-right-in-the-eye gaze he charms as a man with no bias, equally at home with treating each candidate fairly, reading the script and ringing the time’s-up bell.

With candidates aligned across the stage in a neat row, debate mode launches with brief statements to introduce platform and personality. Some candidates fall away early after a quest through the audience and a quick run for the money. A simple twist of fate and a couple of my favorite characters spin out of the election cycle.

The actors are more polite than the real thing and follow the rules more closely than any political candidate, never speaking beyond the ringing bell in several timed challenges that inch one above the other. One such one-on-one contest, a dance-off, ensues between John Carroll, who plays a former football star and Eva Lewis. Propelled by the driving intensity of loud music and a competitive edge in the true spirit of one-upmanship, jackets unfurl in a hilarious timed duo.

Other candidates make themselves known through slogans that repeat or spur on the next response. Denny Johnson’s curmudgeon is a laughable pleasure calling on some good physical comedy to get the point across. His home remedies diet of apple cider vinegar, cream of wheat, and raw yellow onions, which by the way has kept him from any doctor’s office for 42 years, should quickly sweep aside any health care issues. These things can take care of themselves. 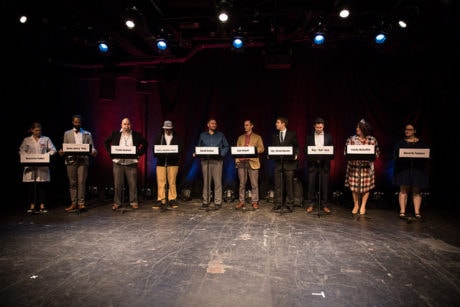 WIT repeats POTUS Among Us every four years in tune with the election cycle. It is an audience immersive show that includes everyone in the action, allows one to stand up and be counted, and the voice to be heard. It is cliché but there is a mirthful glee in sharing this experience, feeling everyone’s pain, and seeing performances that ignite through a catch-phrase.  The field does narrow down to two candidates and you get to make your choice, results are announced in the lobby as  the electorate is leaving the event. See WIT and you’ll see you’ve won. 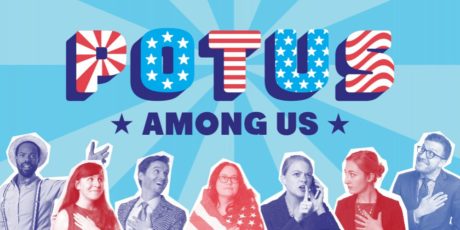