Growing up as a hearing child of deaf parents, Gloria Rosen faced many challenges, both in interpreting for and communicating with her family, and then struggling to find her own voice in the world. She addresses those issues and more in her autobiographical one-woman show Listen . . . Can You Hear Me Now? in this year’s United Solo festival.

Originally conceived as a 20-minute piece for a hearing audience in 2007, after her acting coach, mentor, and friend Peter Flint urged her to tell her story on stage, the current production has been expanded and includes an ASL interpreter, to make the relevant presentation accessible for the deaf community as well.

Portraying herself and all of the other characters in her personal recollections, Rosen gives us the backstory of her family and recreates the pressures she felt as a youngster who had to be constantly “vigilant, alert, aware, watchful,” to perform the crucial job of listening for her parents and keeping them apprised of what they couldn’t hear. Director Suzanne Bachner employs animated blocking, as Rosen moves around the mostly bare stage, actively engaging the audience in a casual conversational tone, and comically impersonating each of the individuals in her life with distinctive gestures, voices, and demeanors.

There are funny segments, including one in which lights begin flashing furiously, signaling that the phone and doorbell are ringing simultaneously in her wired childhood home, as she frantically tries to get to both in time to satisfy her parents. There are coming-of-age episodes in which she defies her mother’s wishes and goes away on vacations with friends—and loves her taste of freedom! And there are laughable scenes of using the latest advancements of TTY and relay service operators that are not always as helpful as they were intended to be. 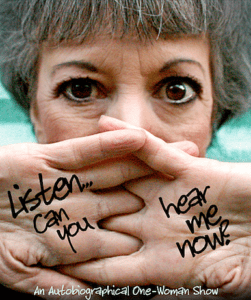 But there is also a spotlight cast on the serious lack of understanding between the hearing, deaf, and CODA (Children of Deaf Adults) communities. In the context of the show, the sound effects of ringing phones and buzzing doorbells, records and TV, running water and rainstorms, and other common everyday noises make hearing members of the audience acutely aware of what we usually take for granted. And underlying Rosen’s humor are feelings of isolation, loneliness, frustration, and disappointment. She conveys the pathos of living her formative years in “a war zone,” ofbeing forbidden by her mother to learn sign language, to show facial expressions, to laugh, to cry, or to discuss her feelings and situation with others. There are traumatic experiences that haunted her, but of which she couldn’t speak, and the “good intentions” of health-care aides to provide audio books for her deaf mother. “Ugh, hearing people!”

Throughout the monologue we feel Rosen’s pain of being an outsider within her own family and in society at large, and her growing need to inform the world that “deaf did not mean stupid.” Rosen delivers that message loud and clear in Listen . . . Can You Hear Me Now? It’s an important step in enlightening while entertaining, and in bringing diverse communities together in understanding.

Footage in the video is from the 2013 Hollywood Fringe.