The music and performance style of Elvis Presley lives on and is part of the American psyche. Although the “King” of rock-n-roll is dead, he will never be forgotten. This was evident in The Philly Pops performance of Elvis: The King’s Songbook in Verizon Hall at the Kimmel Center. The POPS orchestra, conducted by Michael Krajewski, was joined by guest artists, Allison Blackwell (vocalist), the Dave Bennett Quartet (vocals, piano, bass, and drums). Dave Bennett sang and played guitar, piano and clarinet. Before each piece there was a short description and contextualization of what was to come by the conductor, Ms. Blackwell, or Mr. Bennett.

The highlight of the concert, for me, was the Medley near the end of the concert, which featured Elvis’ rock-n-roll phase: “Blue Suede Shoes,” “Jailhouse Rock,” “Hound Dog,” and a “Whole Lot of Shakin’ Going On.”

Accompanied by the orchestra and quartet, Bennett played piano and sang. He seemed to channel Elvis in his ostentatious technique: playing bent-over while standing on the piano bench, and seated playing with his foot. The conductor warned at the beginning of the concert that this was not going to be an imitation of Elvis concert—no gyrating! Bennett did not go that far, but he did take off his suit jacket and let loose! He invited the audience to stand up and clap too. His singing was also the strongest while he was at the piano during this set. His voice was resonant, clear, emotive and full on all the words, even though he was not facing the audience.

In contrast, while playing guitar and singing in the other songs, facing the audience, he seemed to be hindered by the standing microphone. Some words were dropped and occasionally he was overpowered by the orchestra’s volume. A body mic would have been preferable for the songs in which he played guitar and sang, in order to give him more freedom to move and project.

All of the songs that were presented were familiar to the enthusiastic audience. The orchestra showed its range and versatility during this concert. In the first half in the Medley of “That’s All Right” and “Blue Moon of Kentucky” they evoked country music, honky-tonk style. The violins transformed into fiddles at times—playing percussively with twang.  For many of the pieces, the orchestra supported the rhythm and manner of the Dave Bennett quartet—the drums and electric guitars setting the tone for the rock-n-roll and pop songs. However, this was one of a few standouts in which the orchestra was more prominent in shaping the style. 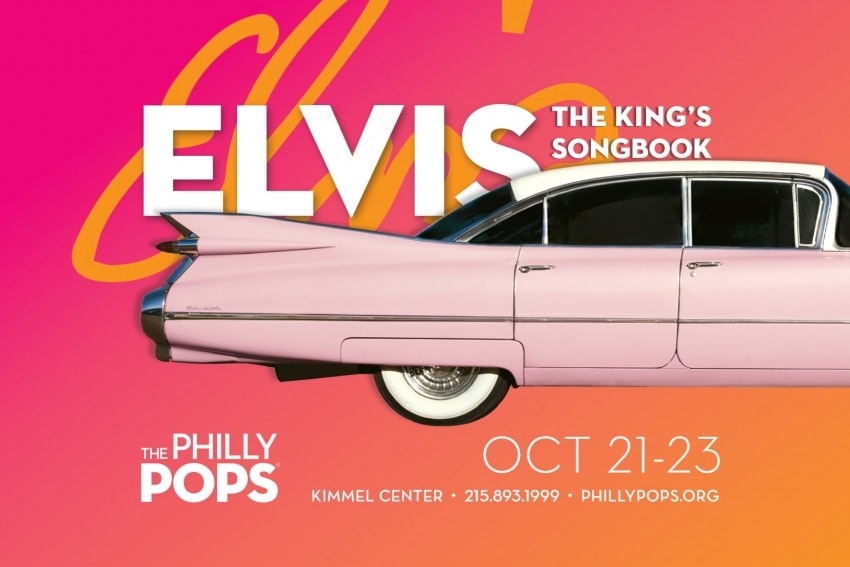 In the second half, the orchestra played in its most classical fashion in “Surrender Now or Never,” and in its most majestic in “American Trilogy Fantasy.” As I heard “Surrender Now or Never,” a piece that the orchestra played without the vocalists on the drums and guitars, it made me think of 19th century Italian opera—the lush legato of the strings embedded in a familiar melody. This was more similar to the music that one expects to hear at the symphony. The conductor explained afterwards that the songs “Surrender” and “Now or Never”, that Elvis sang, were English versions of the Neapolitan songs “Torna a Sorrento” and “O Sole Mio.” Elvis liked them so much that he wanted to sing them.

The “American Trilogy Fantasy” was a compelling composition and rendition of three well known songs: “Dixie,” “The Battle Hymn of the Republic,” and “All My Trials.” Elvis sang this trilogy, but the Philly Pops performed it as an orchestral piece, or as the conductor called it, “a symphonic interpretation.” The full orchestra is employed in this piece and each section has a chance to play the melody. The orchestration is loud and broad for the “Battle Hymn of the Republic” themes. Overall, more intricate than Elvis’ version, it serves as a showcase for the orchestra’s virtuosity. It feels epic and successfully conveys the American spirit, patriotism, and southern pride implicit in the trilogy.

Allison Blackwell added a magnetic stage presence and expert vocals to the evening.Her voice is rich, with a wide range and very powerful. At the same time, she makes full use of vocal colors, dynamics, from soft to very loud, and facial expressions, depending on the emotion communicated. My favorites were two contrasting performances: “Always on My Mind” and “If I Can Dream.” “Always on My Mind” is a more subdued song, while in “If I Can Dream” Blackwell went into gospel mode, passionate and mighty. She explained that “If I Can Dream” was written for Elvis so that he could express his sorrow and indignation about the deaths of Martin Luther King, Jr. and Bobby Kennedy. The song contains excerpts from King’s famous “I Have A Dream” speech. Blackwell and Bennett had a few duets together, in which they harmonized and complemented each other. Bennett also distinguished himself in clarinet solos throughout the concert.

The Philly Pops and guests received a hearty standing ovation at the end, and performed “Johnny B. Goode” as an encore. Elvis: The King’s Songbook is a “must attend” for Elvis fans. The songs are so familiar that anyone who enjoys “Pops” concerts or lighter orchestral fare will have a great time.

The Philly POPS, Elvis: The King’s Songbook plays from October 21-23, 2016 at Verizon Hall at the Kimmel Center for the Performing Arts—300 South Broad Street, in Philadelphia, PA. For tickets, call the box office at (215) 893-1999, or purchase them online.