The National Chamber Ensemble opened it’s 10th season last Saturday at the Rosslyn Spectrum Theatre. The concert called, A Night In Vienna was a collaboration with the Austrian Cultural Forum. The Director of the ACF, Andreas Pawlitschek was present to give introductory remarks. 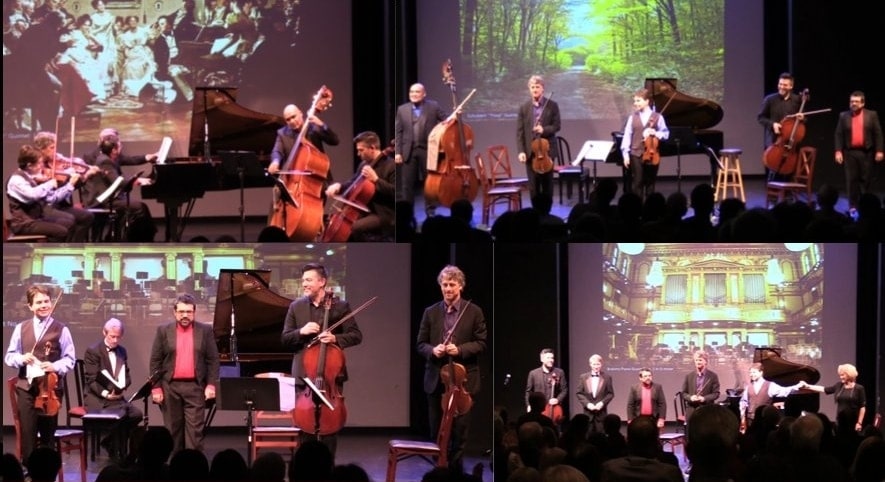 The National Chamber Ensemble has become more polished over the last decade, offering exciting interpretations of classics as well as unusual and interesting new or rarely performed works. The concert offered a great example of why NCE has grown and has a loyal following. Everything from the funny introductions by the musicians to the impassioned music making felt natural and engaging.

The evening opened with Schubert’s song “Die Forelle,” ably sung by soprano Nancy Peery Marriott and pianist David Chapman. The song focuses on an onlooker who watches the happy trout till a fisherman comes along and figures out how to trick the fish and catch it. Immediately after, the NCE performed Schubert’s Masterpiece, the “Trout” or “Die Forelle” Piano Quintet which uses the song as inspiration.

The balance between the strings and piano was perfect and each instrument passed the thematic material back and forth with great variety and elegance. The quintet replaces the second violin with a double bass with great effect. The bass, played by T. Alan Stewart was wonderful, adding great tone and musicality to every phrase. The song comes back in a set of variations in the fourth movement of the Quintet at which point Artistic Director Leo Sushansky told the audience that now they would get the story from the perspective of the fish as a picture of a large trout staring at the audience appeared behind the ensemble.

The Brahms Piano Quartet in G minor which concluded the concert was an expressive roller coaster of raw emotion and moods.The group demonstrated an almost orchestral richness of sound with the strings luxuriating in the warmth and beauty of tone. Carlos Cesar Rodriguez was a dynamo at the piano. One moment dominating the phrase in a grand soloistic manner then fading away to let the string textures shine through. The second movement had an almost impish quality. While the Andante exhibited the most compelling soulful playing of the night. The Gypsy style finale was breathless virtuosic dance which exhibited great swagger and a good dose of testosterone. It was a great way to end the performance and resulted in bravo’s and a standing ovation.

I really enjoyed the pacing of the program and the feeling of the heat rising and excitement building throughout the night towards the thrilling conclusion.