The Trump Card, an original solo performance by monologist extraordinaire Mike Daisey, is a searing punch in the gut to rival any leaked Access Hollywood tape. The current production, which only runs through October 30th, is an updated version of the same blistering show that Daisey performed at Woolly back in August. But so much has happened in the last two months that it is well worth a visit even if you saw the last production. Smack dab in the middle of the zeitgeist, The Trump Card is hysterical, uncomfortable, sobering, and terrifying. In other words, it is the perfect reflection of the 2016 presidential contest.

Part biography, part autobiography, and suffused with Daisey’s shrewd insight, The Trump Card soars above the legion of lesser think pieces that this crazy election has spawned. For those of you desperate for an explanation of why – why?! – the Trump phenomenon has gone this far, Daisey’s show is a soothing balm. Because, to put it frankly, he nails it. And no one is exempt from Daisey’s penetrating blame. To name a few of the culprits of the Rise of Donald, as seen by Mike Daisey: Racism, the Republican Party, racism and the Republican Party, the Tea Party, Sarah Palin, the Left, NAFTA, welfare reform, white poverty, Roy Cohn, Trump’s father, racism again, the media, and Washington, D.C. Daisey, under the skillful guidance of Director Isaac Butler, unspools his nuanced perspective with the precision of a trial lawyer and the captivating intensity of a revival preacher.

Far from a polemic, The Trump Card is a deeply personal affair that focuses squarely on Daisey’s own point of view about the Donald. In the process, we learn not just about Trump’s life but about Daisey’s as well, from his hardworking mother to his bigoted grandfather. And although Donald Trump is no hero in this production – Daisey says pretty early in the evening that he despises the man – he is presented as a virtuoso performer, a man whose marketing skills should be admired in the same way that we can agree Genghis Khan did a crackerjack job of killing people and taking their land.

There are moments when the comedy of Trump and the tragedy of Trump converge. At one point, when Daisey is going on an extended riff about the numerous allegations of sexual assault leveled against the nominee, I heard a woman sitting behind me say to her friend, “Why are you laughing?!” Why, indeed? Rape is certainly nothing to laugh about, even less so when the accused is the presidential nominee of a major political party. But when Trump says, on national television and after a dozen women have come forward, that nobody respects women more than him? It’s ridiculous! It’s hilarious! And it’s scary as hell. That woman I heard was right to be a little indignant, and her friend was also right to laugh. That’s the paradox of the 2016 election, and it’s the paradox that Mike Daisey captures so well in The Trump Card. 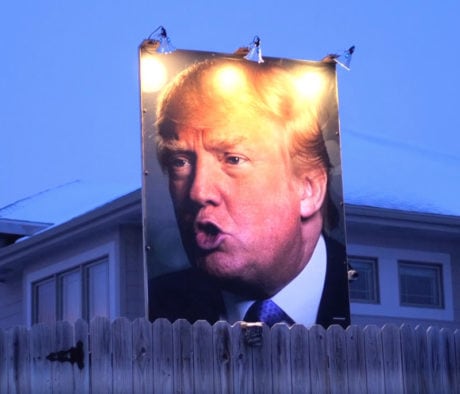 It’s easy to see why Mike Daisey is nationally acclaimed as a monologist (he is also responsible for the viral masterpiece, The Agony and Ecstasy of Steve Jobs). Seated behind a desk with nothing but a glass of water and some handwritten notes, he is an incandescent presence on stage. He never exactly gives an impression of Trump, or any of the other characters in his winding tale. He simply becomes them, and in some cases this is even more disturbing. An imagined monologue by Roy Cohn discussing his famous protégé is particularly chilling, in part because it seems so much like it could be true. But Daisey is equally masterful when he embodies a prototypical Trump supporter – a person furious at the government, suspicious of the elite political class, and resentful of both parties – and provides a powerful, critical perspective at a time when Washingtonians are most tempted to turn our noses up at Trump’s base.

The current raft of polls seems to indicate that a President Trump is not, God help us, in the cards. But Daisey’s performance questions, rightly, what effect his explosion on to the political scene has already had – and if anyone out there is prepared to do it again, but cleaner and better? It is a sobering thought. But as we trudge through the final scorched weeks of this Dali-esque election, there is no doubt that we could all use a good laugh, a good cry, and some much needed wisdom. The Trump Card provides all three, and so much more.

Running Time: Two hour and 20-minutes, with no intermission.

LINK:
An interview with Mike Daisey: Magic Time! Mike Daisey on Playing ‘The Trump Card’ in the Turbulence of Trump by John Stoltenberg.