It didn’t take long for Carmine’s to become one of my favorite restaurants, even though it isn’t in Baltimore. It was a trip to the Tropicana Hotel in Atlantic City about five years ago that started it all. A group of us were deciding where to eat when we happen to pass Carmine’s in an area known as The Quarter in that hotel. Since we all agreed we liked Italian food, we decided to go, despite none of us having previously eaten at Carmine’s.

The restaurant is big. We were told it seats about 550 on two levels. We took our seats and were instructed we would find the menus written in large letters on the walls. So up comes the server and we begin to order. ‘Hold it,’ he said. ‘Do you realize this is family style eating which here means very large portions. For the five of you, I recommend three entrees and maybe two salads.’ 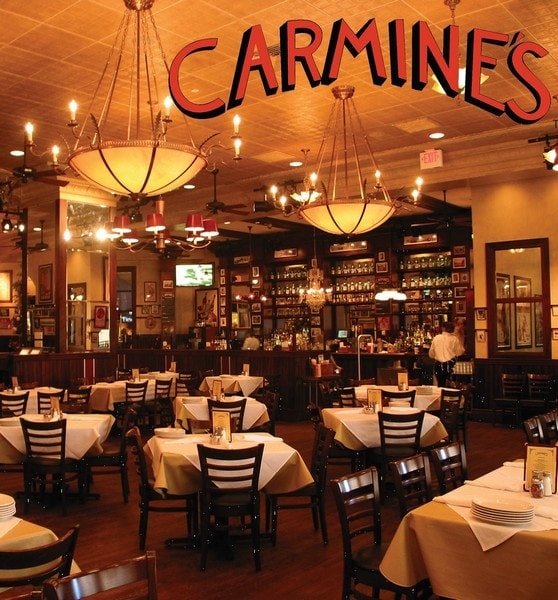 One of the bigger eaters at the table asked if that would be enough. He assured us it would, and he was right. We even had food left over. And for that gang of eaters, three of them could seriously use a sustained diet, that was a surprise.

Unfortunately, we were heading home that day and since it was summer
we didn’t think the food would last for three hours in a car. So the question became, what do we do with the food? We figured the casino dealers wouldn’t trade it for chips, so we decided to give it to a few of the guys
who push those three wheel cars on the boardwalk. So that was my initial introduction to Carmine’s.

Since that day I have been back to the Atlantic City location four times and have also visited their location in Washington, which is near the Verizon Center. But let me tell you just a few things about the Atlantic City location. Reservations are a good idea just about any time, but especially on weekend and holidays. When you finish ordering take a stroll around the place, both levels, and check out all the neat photos on the walls. I make it a quiz to see how many of the people I recognize. Sinatra is obvious, but many of the rest are not, at least to me.

There is a bar with TVs that’s popular. During my last visit it was quite active as the patrons were watching NFL football. The Eagles, Jets, and Giants are favorites. If any of those teams are playing, forget about watching the Ravens.

While Italian food is certainly why people come here, there are other menu items available like chicken wings, rack of lamb, prime rib, porterhouse, veal chop, and salads.

In case you want to know, four popular items are yes the chicken wings, meatballs, penne alla vodka, and chicken parmigiana. For dessert, if you can possibly eat it after the feast, try the Titanic Split x 10. I’ve never seen it but am told it is a monster. If you can eat any dessert after the meal, you deserve a star in the glutton hall of fame. Carmine’s offers a gluten free menu for those in need. 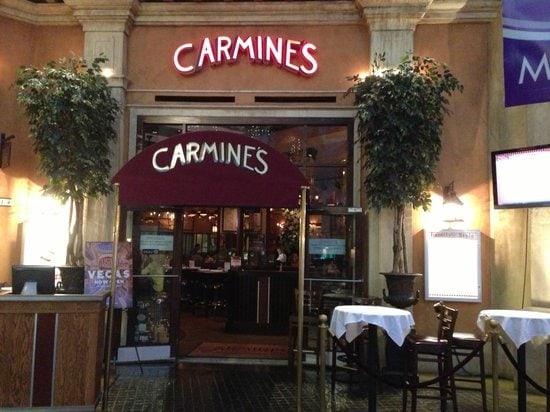