I’ll Be Seeing You is a delightful portrait of the love and sacrifices of a newlywed couple separated by military service during World War II. The letters between Spark and Charley while Charlie is deployed in the Navy, along with the reminiscences of the couple’s older selves as grandparents, tell a universal story that’s also intimately personal, romantic, often witty and suffused with charm. Incidentally, the couple whose real-life correspondence inspired the show is Spark and Charley Frazier, grandparents of Luke Frazier, Orchestra founder and Music Director.

Frazier collaborated with writer and adapter Kelley Lund and Director Nathan Brewer to tell their story, punctuated throughout with memorable tunes from the Great American Songbook.

The song selections captured the spirit of the time, but the vocal performances elevated and transformed otherwise generic hit tunes to embody the experiences and emotions of the couple at their different stages of life. There were incredible solos numbers. Of course, any song performed by Florence Lacey (“When Your Lover Has Gone” and “I Get Along Without You Very Well”) or Ron Raines (“The Very Thought Of You” and “It’s Been A Long, Long Time”) becomes a one-act master class. Rachel Eskenazi-Gold and Claybourne Elder made a perfect young couple, madly in love exuberant, unfailingly optimistic and very funny whether teasing each other poking fun at themselves with self-deprecating humor. Eskenazi-Gold’s beautiful rendition of “You Go To My Head,” holding a crazy, long final note, demonstrated why she was able to debut on Broadway as The Phantom of the Opera‘s Christine Daaé. Elder brightened up the entire stage on “Blue Skies” and “For Me And My Gal.” 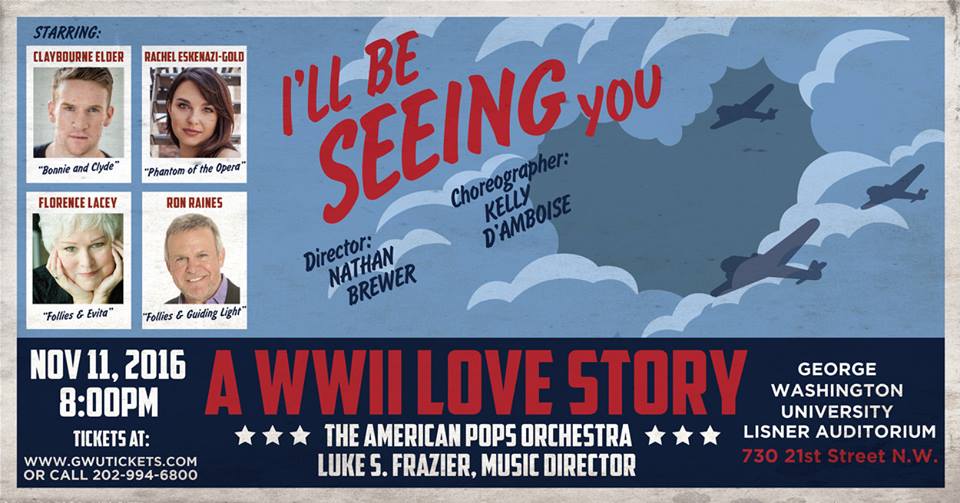 The duets were the highlight of the evening. Eskenazi-Gold and Elder singing “The Nearness Of You” and “Embraceable You” and Lacey and Raines on “The Way You Look Tonight” expressed young and seasoned romance. The jaunty duet by Raines and Elder, “On The Sunny Side Of The Street” and the classic Andrews Sisters song, “Don’t Sit Under The Apple Tree” (from the movie Private Buckaroo, no less) by Lacey and Eskenazi-Gold were both period perfect and incredibly enjoyable.

Ronald Bruce Brady and Hannah Jennens, as choreographed by Kelly Crandall d’Amboise, provided an essential element to the show, especially dancing to iconic songs of the period such as “Boogie Woogie Bugle Boy” and “Stompin’ At The Savoy.” It was an era when many couples first met at a Big Band dance venue. Brady and Jennens definitely cut a rug with high kicks and dazzling lifts.

Wonderful period photographs (both Frazier family photos and well-known stock images), newsreel footage, radio clips, celebrity ads for war bonds, etc., were projected on a screen behind the orchestra throughout the show. I bet a lot of folks in the audience went home and dug out their old family photo albums to reflect on fond memories.

What a delightful way to celebrate Veterans Day! 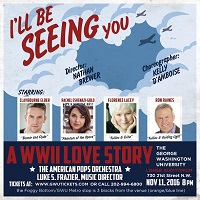 “The Nearness Of You” / Claybourne Elder & Rachel Eskenazi-Gold

“When Your Lover Has Gone” / Florence Lacey

“I’ll Be Seeing You” / Ensemble

“I Get Along Without You Very Well” / Florence Lacey

The Very Thought Of You / Ron Raines

“On The Sunny Side Of The Street” / Claybourne Elder & Ron Raines

“My Guy’s Come Back” / Rachel Eskenazi-Gold

“You Go To My Head” / Rachel Eskenazi-Gold

“For Me And My Gal” / Claybourne Elder

I’ll Be Seeing You: A World War II Love Story was performed for one night only, on November 11, 2016 at 8 pm, at George Washington University’s Lisner Auditorium – 730 21st Street NW, in Washington, DC. For more information on The American Pops Orchestra, go to its website.