The Shakespeare Theatre’s production of The Secret Garden is like a dream in which miraculous things happen, old grudges are swept away, and children rediscover childhood. The book, a revered classic, has its roots in a tragic event which changed Frances Hodgson Burnett’s life forever.

In her day, Burnett was a major literary celebrity. The success of Little Lord Fauntleroy catapulted her to international fame. The story of a disinherited American boy who becomes a British earl was all the rage on both sides of the Atlantic. The play based on the book was a hit in London and Boston. There were Fauntleroy toys, playing cards, writing paper, and chocolate. Even today, on amazon.com, you will find a “Dollhouse Little Lord Fauntleroy.” The velvet suit, lace collar, and long curls worn by the little lord became a fashion craze, causing boys to be forced into such costumes. In some ways, the result was not a happy one; one boy burned down his father’s barn, another boy kicked a policeman, and Frances’ son Vivian, upon whom the character was based, endured a lifetime of being referred to as the “real” Little Lord Fauntleroy.

When Burnett moved into Great Maytham Hall in Kent, she was a far more popular success than her cohort Henry James, who lived down the road; with her plays bringing in more than a thousand dollars a week, she was her era’s equivalent of [J.K.] Rowling.

Little in Burnett’s background suggested she was destined for such phenomenal success. Frances Burnett, nee Hodgson, was born in an industrial city, Manchester, England, in 1849. Manchester was dominated by the cotton trade, which was destroyed by the Civil War. Her father died of a stroke at the age of 38, and her mother Eliza, alone with 5 children, took over his furniture and fittings business. Things did not go well. Relying on her brother, who boasted about how well he was doing, Eliza sold the business. In 1865, the family joined him in East Tennessee. Although the verdant countryside was a refreshing change, the local economy was struggling here, too. At times the family had to rely on neighbors for food. From this impoverished beginning, Frances Hodgson Burnett went on to a life of remarkable accomplishment.

She wrote popular novels, short stories, and plays, many of them for adult audiences. Her early stories were published in Godey’s Lady’s Book, Peterson’s Magazine, and Scribner’s Monthly. Some of her most famous books were Little Lord Fauntleroy (1886), Sarah Crewe (1888, later republished as The Little Princess 1905), and The Secret Garden (1911). In 1898 she divorced her first husband, Swan Burnett, an American physician, and in 1900 she married British doctor and aspiring actor Stephen Townesend. During their short marriage they resided in England. She attracted a good deal of publicity, some of it positive, some of it negative. Interestingly, according to Gretchen Holbrook Gerzina’s first-rate biography, Frances Hodgson Burnett: The Unexpected Life of the Author of the Secret Garden (Rutgers University Press, 2004), her grandchildren referred to her as “that woman.”

Why? Swan Burnett was a gentle young man who walked with a limp due to a childhood injury. Swan, who adored her, was likely a sympathetic listener, understanding about the “shabby-genteel” embarrassments of her young life. He was the serious one, entranced by her creativity and playfulness  They lived in Paris for a time, and the early years of their marriage appeared to be happy ones. They were supported by Frances’ writing, while Swan studied medicine. They then settled in Washington, DC. Frances made new friends, Swan’s practice thrived, and they had two healthy young sons, Lionel and Vivian.

In the summer of 1881 she became the subject of gossip, as she spent the night with her editor, Richard Watson Gilder, in a Long Beach hotel.  Both were married, and the arrangement was agreed to by Gilder’s wife, but Frances described a distinct air of disapproval she faced at the time. Being a woman author, it seemed, was not quite respectable. And Frances was plagued by bouts of illness and depression, despite her burgeoning career.

Swan focused on his practice and Washington, DC, whereas Frances traveled more and more. During the 1880s they seemed to grow apart. Frances returned to Europe with the boys, where she hoped to give them a more cosmopolitan upbringing than her own.

Gradually, things took a turn for the worse. The press was increasingly critical. She was said to be aiming for commercial success instead of artistic merit. She was admonished for her love of clothes. Her play, Phyllis, received bad reviews. There were divorce rumors. His father away at a conference, Lionel stayed alone in Atlantic City, while Vivian and Frances were in London. Lionel’s letters became increasingly despondent. In 1889 Frances met Stephen Townesend, an English doctor and would-be actor. She would later marry him, with disastrous consequences. She had a serious riding accident and almost died, and her recovery was painfully slow.

Lionel, alone in Atlantic City, read newspaper accounts of his mother’s extravagance and alleged divorce. He too became subject to bouts of illness and depression. He entreated his mother “to get well, and not to worry about me.” But he had been diagnosed with incurable tuberculosis. There were also reports that she was in poor health, which alarmed him. Frances rushed to his side and took him to all the best spas and specialists. She then settled in Paris, hired a nurse and brought in a French doctor. Stephen and Frances took care of him as best they could. But as he wasted away he became more and more like a small child. Frances would come to him in the middle of the night when he called for her.

Strangely, during this crisis she went away to London with Stephen to handle business matters. For a few weeks in November, Lionel spent much of his time asleep. Then, on December 7, 1890, he kissed her good night and said, “God bless Mammie.” The next day he was gone. He was 16 years-old. Frances wrote, “I tried to carry you in my arms to the gates of Heaven, past Pain and Death so that you would wake up to beautiful, strange surprise at your new, strong, happy body and the day that has no night, and the city whose gates are never closed.” She said to a friend, “I appeared this, or I appeared that; I did this and I did that. But all I ever was is the mother of two little boys.”

For months she wandered Europe, ill and confused. Her interest in Spiritualism and Christian Science grew. In 1892 she formed the Drury Lane Boys Club in Lionel’s name, for the poor boys of London. She also decided to assist Stephen (by this time they were probably lovers) to a successful acting and writing career. This only increased the gossip, and in 1898 she filed for divorce from Swan Burnett. The Washington Post had reported that the couple’s difficulties were due to Frances’ “advanced ideas regarding the duties of a wife and the rights of women.” The New York Times’ London correspondent wrote that so many women writers divorced their husbands because “in households where the wife is an author…she insists on reading her manuscripts to her husband, and then when he has taken to drink divorces him.”

In 1900, she married Townesend. The New York Journal and Advertiser headline was:

LOVE’S AFTERNOON IN THE LIFE OF LITTLE LORD FAUNTLEROY’S MAMMA. THE AMAZING MARRIAGE OF MRS. HODGSON BURNETT, AMERICA’S GREAT WOMAN NOVELIST, TO HER PRIVATE SECRETARY, YOUNG ENOUGH TO BE HER SON.

Townesend was actually 35 to her 45 at this time. One theory was that he had married her for money; another was that he had threatened to reveal some compromising secrets of Frances’ past, and he had blackmailed her into marrying him. He became controlling, threatening her and raging, and she began to fear for her life. In 1902 she collapsed and entered a sanatorium. She ended the relationship, but was again hounded by reporters and dogged by ill health.

The Secret Garden was inspired by Great Maytham Hall in Kent, which was Frances’ favorite home. She rented it in 1898, when the garden was significantly overgrown. With the aid of a robin, Frances found the hidden door and restored the garden. Surprisingly, when Maytham Hall was sold, Frances could not afford to buy it. The two losses, of Maytham and of her beloved son Lionel, became the background for the book we know today.

Mary Lennox (Anya Rothman), the central character, age 10, experiences every child’s worst nightmare; the loss of both parents. She is a lonely child. We can picture her, seated in a window casement, in a dark blue pinafore, tracing lines on a window as she waits for the return of parents who will never come.

Colin (Henry Baratz), her cousin, suffers a different kind of pain. Informed by the ill-concealed whispers of adults that he will not live to grow up, he is bedridden, hysterical, and given to melodramatic fits of temper.

Archibald Crane (Michael Xavier), Mary’s guardian and Colin’s father, has been crushed by the loss of his beautiful young wife. He is merely going through the motions of existence. He cannot face his son’s eyes, which are so like his mother’s, and only comes to see him at night.

Set against these melancholy characters is Dickon (Charlie Franklin), a kind of junior Great God Pan. He is a local boy with a passion for nature who has a mysterious ability to touch and heal the animals and plants around him. Martha (Daisy Eagan), the maid, also gives Mary the tenderness she so desperately needs, and helps her in her journey to health.

The Shakespeare Theatre’s magical production takes us into another, finer world, where love lost can be found, and the heartbreak of a child can be soothed and overcome.

There is certainly an irony in a “scandalous” woman gaining fame for writing a beloved novel for children. But let us spare a thought, and perhaps some thanks, for “that woman,” Frances Hodgson Burnett, who suffered unimaginable grief, and turned it into a masterpiece.

Daisy Eagan: From Her Tony Award-winning Mary Lennox to Playing Martha in ‘The Secret Garden’ at Shakespeare Theatre Company by Joel Markowitz.

Dangereuse: “That Burnett Woman: The Magical ‘Secret Garden’ at the Shakespeare Theatre Company” by Sophia Howes. 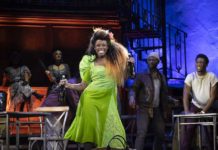 Explosively beautiful ‘Hadestown’ gets down at Kennedy Center 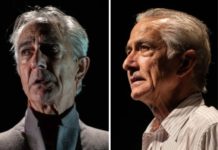 How to be a hero: The lesson of ‘Remember This’ at Shakespeare Theatre