A Philly Pops Christmas is a delightful concert of Christmas Carols, humor and lights, which rings in holiday cheer. The POPS orchestra, conducted by Michael Krajewski, was joined by guest artists, Tony DeSare  (vocalist and pianist), The Philly Pops Festival Chorus, Philadelphia Boys Choir and Chorale, the African Episcopal Church of St. Thomas Gospel Choir, Peter Richard Conte (organist) and Santa! I enjoyed the traditional renditions of chestnuts like “O Come All Ye Faithful,” and “I’ll Be Home for Christmas,” as well as more colorful interpretations of  “Schubert’s Ave Maria” and “We Need A Little Christmas,” “Go Tell It On the Mountain,” and “Jingle Bells.”

There were nineteen selections on the program, including the last, which was a sing-a-long of several carols that were printed in the program. In addition, the following were performed: “Ding Dong Merrily On High,” “Everywhere Christmas Tonight,” “It’s the Most Wonderful Time of the Year,” “Let it Snow,” “March of the Toys,” “Hark the Herald Angels Sing,” “The Skater’s Overture,” “Santa Claus is Coming to Town/The Man With the Bag,” “Rockin’Around the Christmas Tree,” “Away in the Manger,” “Peace and Favor Rest on Us,” and “Wonderful World of Christmas/Silver Bells.”

The Philadelphia Boys Choir and Chorale were well rehearsed and sang expertly. They performed “Everywhere a Little Christmas” and “We Need a Little Christmas” from memory. Their youthful voices blended into one unified sound for each vocal section, which was stunning. Their live singing sounded as good as a studio recording (in which multiple takes and editing can be done). “We Need a Little Christmas” was exciting—they were able to communicate the pure innocent spirit of the season. I was inspired by the explicit and dynamic direction of Conductor Jeffrey Smith. Going beyond just keeping all instruments and voices together, he animated both the orchestra and the choir.

Michael Krajewski, and the guest vocalist, Tony DeSare, commented between selections with jokes and anecdotes. DeSare asked early on in the concert, “What is Christmas?” DeSare seemed most comfortable and engaging while playing the piano and singing. He has a pleasant voice that is versatile and expressive. In “I’ll Be Home for Christmas” and other traditional renditions, his style reminded me of Sinatra.

By far DeSare’s funniest performance was the “Jingle Bell Variations” in the second half of the concert. He played 20 different interpretations of “Jingle Bells!” Some were instrumental like the ragtime, tango, waltz, polka and classical versions. In others he imitated singers such as Elton John. He even tackled a Jewish version and a Spanish one. DeSare sparkled in this number, demonstrating humor, acting skills and musical dexterity.

The Gospel Choir wowed with their movement and fervor. I felt like I was in church, the spirit and passion were so strong and vibrant. They jubilantly sang in “call and response” (back and forth exchanges between a soloist and choir), swaying and clapping to the rhythm. The members of the choir wore African fashions—bright colored dresses and headwear for the women, and robes for the men.

The orchestra played with conviction, skill and joy throughout the concert. I particularly liked their arrangement of “Go Tell it On the Mountain,” an African-American Spiritual, also considered a Christmas carol. The conductor begins by playing the simple melody on the piano, and then drums and winds are added.  As the rest of the orchestra joins in, it starts to sound more like rock and roll. So much so that you could get up and dance! Later, after intermission, Michael Ludwig, concertmaster and violinist, executed a touching solo in “Ave Maria” (by Franz Schubert), accompanied by the Boys Choir and the Pops orchestra.

The Festival Chorus sang more standard carols, and Peter Conte on the organ offered “March of the Toys.” Even Santa Claus, played by Chuck Gill, came out and sang too! Finally, I followed Maestro Krajewski’s baton as he faced the audience and conducted during the sing-a-long, the final piece. Then the Philly Pops and company received a standing ovation! The encore on December 3, 2016, was “Let There Be Peace on Earth,” fitting for the season and our times.

Philly Pops was determined to celebrate and spread Christmas merriment. With an enchanting variety of musicians and music, humor, lighting effects, festive decorations, and audience participation, they accomplished their goal and more! 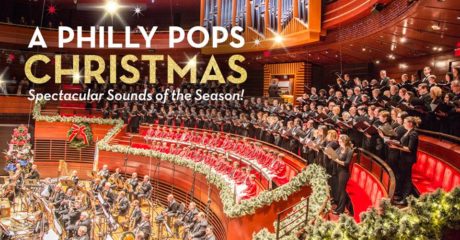 A Philly Pops Christmas plays through December 18, 2016, at Verizon Hall at the Kimmel Center for the Performing Arts—300 South Broad Street, in Philadelphia, PA. For tickets, call the box office at (215) 893-1999, or purchase them online.