For the 6th year in a row, The Keegan Theatre is paying tribute to the Dickens classic A Christmas Carol, with their production of An Irish Carol. Reimagined by Keegan company member, Matthew Keenan, and first produced in 2011, this more modern interpretation of Dickens, has become a Holiday tradition for many in the DC area. This was my first experience with the show. I have seen several productions at Keegan and always walk away impressed. An Irish Carol was no exception. Dickens’ message of the necessity of kindness, generosity, love, and forgiveness to the preservation of one’s sanity and fullness of their soul is beautifully repackaged and presented with laughter, heart, relevance, and relatability to today’s audiences.

Mark A. Rhea directed the play, with Assistant Director Sheri S. Herren. Jake Null was in charge of sound, and lighting was designed by Dan Martin.
The story takes place in a pub in Dublin, Ireland. Playwright, Matthew Keenan, also did the set design, which is the interior of the Irish pub, primarily made of a gorgeous dark wood. A small bar with stools is on one side, with a door that leads to the alleyway. On the other side is a round table positioned next to a mantel and the front door to the pub. The space is quite attractive but possesses a coldness that is anything but welcoming, which suites the mood of the show.

Kevin Adams is David, the pub’s abrasive and irritable owner, who only seems to care about his business. Adams is gruff and moves about with an obvious heaviness. But the play begins by showing a soft side to David. He is standing silently in the pub alone, gently caressing the surface of the bar. He walks over to touch the mantle, and then leans on the table with his head hanging down. David appears to be remembering something with fondness or maybe regret. We don’t yet know what or why. But he makes his way back to the bar and, as some thought overtakes him, he angrily throws up his hands and turns away. From then on Adams plays to David’s harshness and intolerance, but for that brief moment the audience saw a different man.

David is joined by his employee Bartek, a Polish immigrant played by Josh Adams, and immediately barks at him about being late. Adams is soft-spoken and obedient but conveys strength and an intense devotion to his family. And he doesn’t have to withstand David’s verbal abuses alone for long because they are soon joined by two customers and old friends of David, Frank (Timothy Hayes Lynch) and Jim (Mark A. Rhea), though David doesn’t speak kindly to them either. But Lynch returns the blows and is hilarious as the drunken and inappropriate Frank, who creates most of the comic relief for the show.

The audience hears much of David’s story from Frank and Jim, who are attempting to explain to Bartek, when and why their friend David turned into such a miserable old man. Through their conversation we learn about David’s lost love and fiancée, Bernie, who ended up marrying his best friend and business partner Richard, after David had to take over the pub and buried himself in the work when his father passed. Pieces of the puzzle start coming together.

More is learned about the sort of man David is, when his brother Michael (Mike Kozemchak) comes into the pub to find out whether or not he’s coming to Christmas Dinner with the family. Kozemchak does a great job expressing the frustration and hurt that comes from repeatedly reaching out to someone who does not want to be reached, and the sadness of his rejected invitation is felt by everyone in the pub, as well as the audience.

David is also visited by a previous employee, the newly engaged Simon (Matt Hirsh), and his fiancée, Anna (Caroline Dubberly). Simon is a businessman himself, now, and Hirsh gives him a youthful vivacity and drive. Anna is the only stranger to the pub and its crotchety owner, and here eagerness to see the good in David, despite the stories she has heard, is quickly squashed by David’s harsh tone and effortless ability to alienate those around him. Dubberly plays Anna with a beautiful kindness and a passion for doing what is right, as is seen when the audience learns that she is a special needs teacher and also her incredulous reaction to hearing that Bartek is working on Christmas Day.

The last character to be introduced is David’s estranged friend, Richard, performed by Mic Tinder. Richard and David have not seen or spoken to each other for over 30 years, ever since they got into a heated argument over Bernie and David kicked Richard out of the pub, telling him never to come back. Kevin Adams and Tinder do a brilliant job with this intense scene as the two men meet for the first time in decades and discuss the woman they both loved.

For all of the fantastic moments and great acting, though, the story is not entirely seamless. Simon proposes an offer to David for his pub, which he refuses, but this triggers an argument with Simon and Anna that escalates too quickly. The outcome of the altercation is necessary for David’s transformation but the text could do more to develop the cause of the fight in order for it to make sense.

Then there is David’s evolution, which is mostly internal. Kevin Adams does a brilliant job of showing his struggle and ultimate realization, but the audience never gets to understand why. We can guess. We saw a glimpse of that man at the top of the play. And knowing the original Dickens’ makes it obvious where his character is going, but it’s not established in the text of this play.

An Irish Carol, on the whole, is a great success. The cast works together with a magnificent chemistry and the performances are poignant and inspired.
The Keegan Theatre’s production of An Irish Carol is an original take on an old holiday favorite, and an excellent addition to anyone’s list of traditions this time of year. The play successfully carries Dickens’ intended allegory of valuing what is most important in life, which are people and relationships, as opposed to money or property, which is a beautiful lesson to take away from what has been a difficult year for so many. 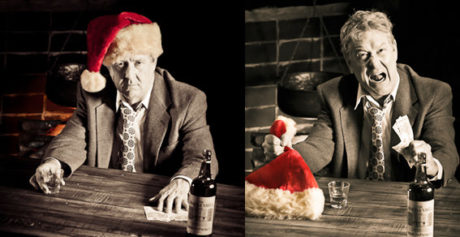