We Three Kings is a brilliant Biblical story with many teachable moments. Written and directed by local playwright Solon Phillips and with songs sung by Phil Simmons and Angela Bryant-Brown, We Three Kings told the backstory of the Three Wise Men, aka The Magi, from the Bible, who trekked from the East to give gifts to and worship the baby Jesus. We Three Kings is a gem of a play, thoroughly enjoyable for all ages.

We Three Kings featured strong performances by the leads, who played the titular three kings: Ed Abby as Zadok, Abdi Abdirahman as Darius, and Robert Hollingsworth as Hodiah. The actors brilliantly flesh out a back story of the Three Wise Men, as mentioned in Matthew 2:1:

After Jesus was born in Bethlehem in Judea, during the time of King Herod, Magi from the east came to Jerusalem and asked, ‘Where is the one who has been born king of the Jews? We saw his star when it rose and have come to worship him.

Early in the action, when pressed by his wife, Jalah (the fantastic Kiara Samuel), why he must go visit a baby, born in Kiara Samuel, the scroll-studying Zadok explained that the child has the power to help “free from guilt and damnation.”

From there the action switched to Darius the Wise, who didn’t always appear terribly wise. The Somolian-born Abdirahman, had a Middle-Eastern visage and was a delight to watch as this crafty, mischievous Wise Man; the jester in the play, it seemed Darius was always in and out of trouble. (His co-star Abby is also Somolian.)

The oldest of the Wise Men was Hollingsworth’s Hodiah, who was always quick with a lesson, taught to either his young students (including the talented Jordan Connor) or to his fellow Wise Men. “Wisdom does not rub off from one man to another,” he emphasized. Hodiah, who had lost his wife and son to marauders, struggled with the sin of unforgiveness. Hollingsworth, sporting a long gray, beard, a cane and a slight tremor, played Hodiah with wistful studiousness. 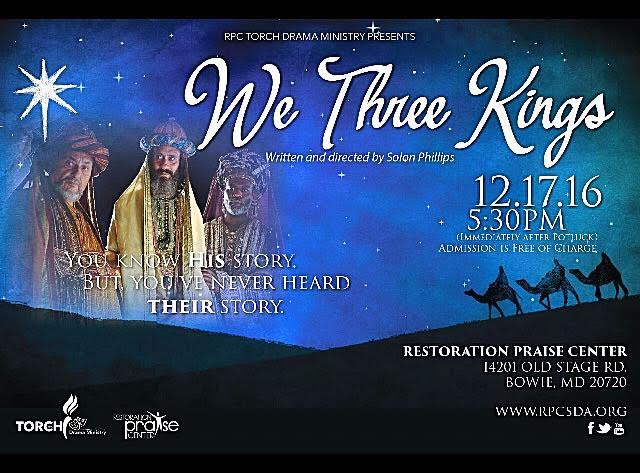 After summoning the Wise Men to his royal court, the sinister King Herod implored them to bring baby Jesus to him. Herod insisted that he sought to worship and then give the child a “gift” that anyone with any Biblical knowledge knows would not have been a gift at all. Nick Pittarelli, who played Herod with an evil relish, also did an excellent job crafting the impressive period costumes.

The action was punctuated throughout by the singing of Simmons, who sang “What Child is This?” and Bryant-Brown, who sang “Oh Holy Night” and “Mary Did You Know?”; both Simmons and Bryant-Brown played angels. (You can find Bryant-Brown’s professionally produced music by clicking here.) I liked the performances of Chris Gibbons as a testy Storekeeper and Trevor Connor as a shady Stranger. Athena Phillips’ Virgin Mary and Kamal Branch’s Joseph, did a lot of acting with a little body language. Phillips, who plans to take his next play to DC’s Warner Theatre, is definitely a director to watch. Be sure to look out for his next production.