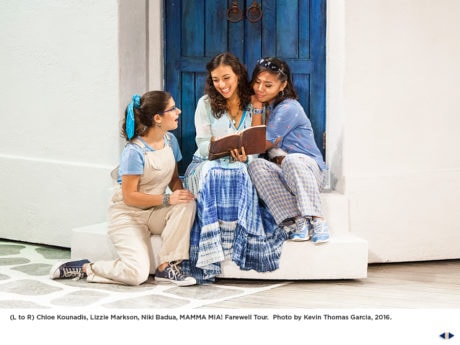 Featuring the incredibly infectious music of ‘70s (and early ‘80s) Swedish pop group ABBA (with the “B” members Benny Andersson and Björn Ulvasus providing the show’s music and lyrics) and fabulous direction of Phyllida Lloyd, Mamma Mia! charts the story of single mother Donna (Betsy Padamonsky), a free-spirited hotelier on an idyllic Greek island and former singer in a girl group, who is preparing for her daughter Sophie’s (Lizzie Markson) wedding.

Unbeknownst to Donna, the bride-to-be reads her old diary and contacts three men she believes could be her dad — Sam (Shai Yammanee), a thoughtful architect; Harry (Andrew Tebo), an affable banker; and Bill (Marc Cornes), an experienced explorer — and invites them to her wedding where long lost loves and friends reunite and lots of punctuated singing ensues.

With a versatile set that seamlessly transition from one scene to the next (designed by Mark Thompson), electrifying live music that propelled intergenerational audience members to bop in their seats (led by Conductor/Keyboardist Kevin Casey), mood-setting lighting effects (designed by Howard Harrison), the skilled 30-member ensemble showcase their multi-ranging vocal and dance abilities, particularly during their fever pitch take of “Gimme! Gimme! Gimme!” and “Voulez-Vous”.

Markson, making her national touring debut, sparkles as strong-willed Sophie determined to ascertain the identity of her father and have him walk her down the aisle. Consistently throughout the performance, she is compelling and charismatic in her delivery, both vocally and emotionally, in numbers like “Under Attack”. 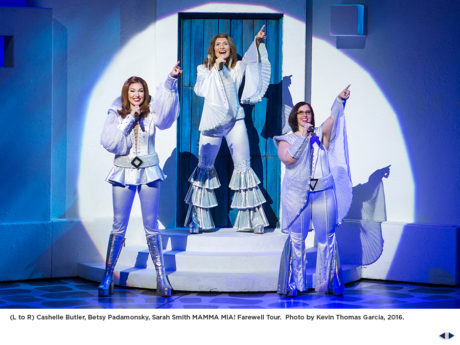 Likewise, Padamonsky renders a protective and fiercely-independent Donna, however, her best friends, Rosie (Sarah Smith) and Tanya (Cashelle Butler), seem to stand out and steal every scene with their exuberant dynamism, which was absolutely amusing to behold;  they were enormously entertaining at every turn, as they always appeared to be having the best time, and it was contagious.

Engaging and endearing, Mamma Mia! is an iconic, feel-good musical that should be on every theater lover’s bucket list.

Running Time: Approximately 2 hours and 40 minutes, including one 20-minute intermission.

Mamma Mia! plays through January 15, 2017, at the Hippodrome Theatre at the France-Merrick Performing Arts Center – 12 North Eutaw Street, in Baltimore, MD. For tickets, call (800) 982-ARTS, or purchase them online