8-track tape: It’s the only medium of Barbra Streisand recordings that I do not own. LP, cassette, VHS, CD, DVD, mp3, mp4 … I have purchased some of Streisand’s work in two or three (for some movie content, maybe four) formats. As Streisand aficionados know, every new medium might bring some infinitesimal sound difference worth another purchase.

On Friday night, the American Pops Orchestra celebrated Barbra Streisand, an undisputed legend of American popular music, on the occasion of her upcoming 75th birthday in April. The overture interwove selections from Streisand’s vast, six-decade span of critically-acclaimed and award-winning vocal artistry — beautiful melodies which evoked memories of her unforgettable performances on stage, motion picture, television, and live in concert.

Following the overture, the host of the evening, Fran Drescher, appeared to enthusiastic applause and cheers. She was a total knockout  — The Woman in Red — gorgeous, ravishing, glamorous and every bit as dazzling was her warm, welcoming smile. She opened with her trademark brand of self-deprecating humor and the audience was in the palm of her hand for the duration of the show. In addition to introducing the performers and their songs, Drescher spoke of her admiration for Streisand’s varied career as singer, actor, writer, director, producer, composer and, especially, as social activist and philanthropist. In Drescher’s long-running sitcom, The Nanny, her character Fran Fine was a major fan. Both stars are active advocates for women’s health, for example, the Barbra Streisand Women’s Heart Center at the Cedars-Sinai Heart Institute and Drescher’s Cancer Schmancer Movement.

The concert was a mix of the two major categories of Streisand material: the songs she introduced (e.g., ‘People’ and ‘The Way We Were’) and the songs she explored and re-invented in the defining way only an accomplished artist could (‘Cry Me A River’ and ‘I Stayed Too Long At The Fair’). Seven amazingly talented performers honored Streisand’s legacy in the best possible way by following her lead in finding their own song interpretations.

Lindsay Mendez (Dogfight, Wicked) led off with an exuberant rendition of ’Don’t Rain On My Parade’ that built momentum and then segued into ‘Before The Parade Passes By.’ Later she tugged at the heartstrings on “I Stayed too Long at the Fair” (recorded on Streisand’s second LP). 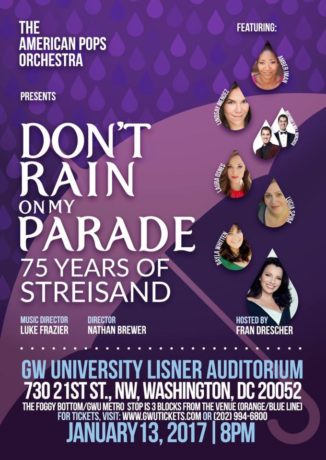 Amber Iman’s (Shuffle Along, Soul Doctor) richly luscious voice caressed the melody on ‘Evergreen,’ the Oscar, Grammy and Golden Globe Award-winning song composed and preformed by Streisand in A Star Is Born. Iman’s performance was pure and unadorned, masterful in its elegance. She tackled “Cry Me A River,” the song that introduced Streisand to many Americans through her earliest television appearances (and included on her first LP). There was no angst in Iman’s version — she had so little use for that cad, the only feeling left was disdain. It was delightful. She also had great fun with ‘Superman,’ a song from one of Streisand’s more pop-rock albums.

‘When In Rome’ and ‘How Does The Wine Taste,’ both from Streisand’s fourth LP, People,  showed off Lucia Spina’s (Les Miserables, Legally Blonde, South Pacific, and Kinky Boots) great voice and versatility — sexy, sassy, witty, and sophisticated. Her third song, ‘What Are You Doing The Rest Of Your Life,’ was enchanting.  It’s one of my favorite songs with lyrics by Streisand favorites, Marilyn and Alan Bergman, who were represented by four selections in the program.

Speaking of enchanting, Broadway’s Cinderella, Laura Osnes took on Streisand songs old, new and classic. She tickled the funny bone with the 1930s number ‘Sam, You Made the Pants Too Long.’ Streisand has a knack for breathing life into vintage material like ‘Sam’ and ‘Second Hand Rose,’ and Osnes was spot on with the wry humor. She triumphed with the classic torch song, ‘My Man,” and an ultra romantic, angelically sung ‘What Matters Most.”

Bayla Whitten has New York, London’s West End and regional credits, and we’re extremely fortunate she comes home to appear in shows, concerts and cabarets. Whitten drew three songs of the spirit. ‘A Piece of Sky’ and ‘Papa Can You Hear Me’ (both from Yentl) showed Whitten’s dramatic chops and vocal range. ‘On A Clear Day’ (the psychics’ official anthem? from the musical of the same title) showed off her no holds barred belt on the challenging final verse.

I’ve had the good fortune to see each of the night’s divas in other performances, but Will and Anthony Nunziata were a delightful discovery. They jump into a song and pull the audience in with them. Forget solar and wind — Nunziata dynamism is our 21st C. energy solution. Their first song, ‘New York State Of Mind,’ was a harmony-infused, jazzy gem. They had a ball with the Barbra Streisand/Judy Garland duet-medley classic, ‘Get Happy/Happy Days Are Here Again.’ Did they argue over who would sing Barbra and who would sing Judy? From these two songs, it was obvious to me why their Carnegie Hall concerts were sold out.

Special mention goes to Kate Rogers whose harp solo on ‘The Way We Were’ was enthralling. I was fascinated watching her fingers strum and pluck the strings, and the circular spirals of motion, that filled the hall with the most delicate, ethereal sound imaginable.

Thanks go to American Pops Orchestra and Musical Director/Conductor Luke Frazier for bringing together this extraordinary talent to recognize the incomparable Barbra Streisand. And Fran Drescher is a treasure. Drescher joked about a theatre news item that referred to her as “silver throated.” She was mystified until her research discovered that the silver-throated tanager squawked and screeched, but did not sing.

LINK:
Review #1: ‘Don’t Rain on My Parade: 75 Years of Streisand’ at The American Pops by David Siegel.