Samsara isn’t a person’s name (despite seeming like a blend of “Sam” and “Sara.”) It is defined as either the process of coming into existence as a differentiated, mortal creature (Buddhism) or the endless series of births, deaths, and rebirths to which all beings are subject (Hinduism). At Single Carrot Theatre, it’s the title of their newest production, a thought-provoking play by Lauren Lee, with energetic direction by Lauren A. Saunders.

Here’s a succinct synopsis of Samsara, from the Single Carrot’s website:

Katie and Craig want a baby. Well, Katie wants a baby, and Craig wants what Katie wants. When Craig goes to India to be with their surrogate, Suraiya, flying-phobic Katie is left alone, plagued by visions of all that could go wrong and a mysterious, seductive Frenchman. Suraiya, an aspiring doctor with secrets of her own, tries to remain cool and aloof while conversing with the life growing inside of her, a curious young man who has named himself Amit. Their lives flow together and intertwine in the cycle of life, death, and rebirth known as samsara.

What this synopsis doesn’t mention is that the play is a fast-paced, comic-laced emotional story with a high energy cast and it effectively employs projections to suggest urban India and selfie video making. Kudos to Jason Randolph for his scenic design, and Steven Kriegel for sound design, which contribute much to the production.

Katie (Alix Fenhagen) and Craig (Paul Diem) start out as a cute couple who can’t conceive. In scene after scene they display varying levels of worry. Katie becomes neurotic about the whole process of sending Craig to India to be there for the birth of their child. Why she is not with him is its own secret, later revealed. Fenhagen’s Katie is not entirely likable or sympathetic, perhaps because of her controlling and ungrateful ways, her insecurities, and her disinterest in Suraiya as a person (played with appropriate ambivalence by Saraniya Tharmarajah).

Diem plays Craig as goofy, and eager yet anxious most of the time – perplexed by Indian customs, the crazy traffic (which thankfully the audience sees behind him on the projections) and just how to relate to the woman having a boy on his behalf. At one point during one of the many long distance calls to Katie he admits, “I don’t want to be a stranger to her.” He also says to Suraiya, “I want you to exist for him, I guess.”

The baby’s existence is a driving force in the days leading up to the birth, because he magically talks to Suraiya, distracting her from her studies with a whole series of insistent questions. Although she gives him a derogatory nickname, he eventually, in utereo, names himself Amit, a common male name in India, which means infinite or boundless. Their exchanges are funny and philosophical, but not always attention grabbing. Utkarsh Rajawat gives Amit a spirit of innocence and curiosity.

The scenes where Katie and Craig are filming their answers to the surrogate agency’s questions on an iPhone reveal the awkwardness that these two have about the process. They try to say the right things by replying to “When did you know you are ready?” “Why a surrogate?” “What is your favorite place?” Ultimately, their comments to each other when they think they are off-camera result in hurt and heartache when Suraiya inadvertently hears them on Craig’s phone. That is the pinnacle moment when, as the Director says in the program notes:

Characters, in their desperation to build a better life for themselves, use their privilege and access to resources in ways that take advantage of the most vulnerable…cause harm with their ignorance, and all retreat to their imaginations to make sense of the unimaginable, as well as to nurse their deepest wounds.

Regarding the retreating to imaginations, that mysterious, seductive Frenchman (Dustin C.T. Morris) troubles Katie’s mind with alternating joie de vivre (beginning with a rousing version of “Thank Heaven for Little Girls,”) and menacing observations about Craig to upset her (“He is not enough!”). As dream based fantasies go, those scenes are wacky, hilarious, and yet, disturbing. As the Frenchman, Morris goes for the big laughs in a completely over-the-top way. A little subtlety might have given him a more sinister edge and a bit more depth. Morris also briefly portrayed two different doctors who were outright obnoxious.

Early on we learn that Katie has uterine tumors, and that is why she can’t conceive. It is never mentioned again, which seems really strange as it is highly unlikely a woman would just leave that alone and not seek medical treatment for something so threatening to one’s health. It just left me scratching my head why the play didn’t follow through on that important point.

This play is a long one act, and since it takes place over a series of weeks and not just one day, so it might have helped for Craig and Suraiya to wear different shirts in their scenes to signify the passage of time. Katie changed into a few nondescript costumes.

Single Carrot Theatre is celebrating its 10th season. Treat yourself to Samsara, an innovative show that explores the underbelly of surrogate pregnancies and couples that they aim to make happy. 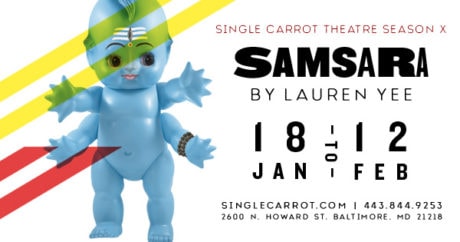