There was a fabulous, swinging party on this past Sunday night and it all happened at the wonderful Bethesda Blues & Jazz Supper Club as the dynamic and talented singer Carla Cooke paid tribute to her father – the legendary vocal artist Sam Cooke – with an evening of musical showmanship, nostalgia and vocal versatility that raised the rafters and the spirits of anyone lucky enough to attend.

Sentiment was in the air as this occasion would have been her father’s 86th Birthday and Ms. Cooke presented her father with the ultimate gift, the gift of Ms. Cooke’s unabashed joy in performing which permeated the entire evening and which would have made her father so exceedingly proud.

Opening with one of her father’s biggest hits, namely, “You Send Me,” I sensed I was going to witness a special evening. With each refrain, her voice grew stronger and increasingly pliant and supple in tone. She created a very relaxed yet caressing and urgently passionate verbal endearment as she repeated the romantic refrain “Darling, you send me…” and, then, glided into a soaring upper register.

A marvelous and absorbing sax solo by Mr. Theo Manning added to the passionate mood of the song.

The swinging song “Having a Party” continued the celebratory mood of the evening with Ms. Cooke swinging and singing, and the audience getting very involved, indeed.

Ms. Cooke’s rendition of her father’s hit song “Chain Gang” was very interactive as Ms. Cooke encouraged the audience to join in the response to the repeated phrase “That’s the sound of the man working on the chain gang.” Ms. Cooke employed edgy thrusts to her glorious voice to embody the strain of the men who toil and sweat as they work unceasingly under the harshness of uncaring authority.

Throughout the entire show, Ms. Cooke conveyed a sense of superb confidence, energy, and a natural command of the stage that is the essence of showmanship.

Ms. Cooke next launched into one of the most enticing and languorous covers of the Gershwin classic “Summertime” that I have ever heard. She   underlined every phrase with a languid and dreamy emotional veneer. She also conveyed a sublime sense of cadence and a heightened vocal power when the most dramatic and poetic passages required it.

Ms. Cooke mentioned that her father loved romantic songs and that she does as well. Then she proceeded to sing the moving classic “Nothing Can Change this Love.” She sang with a fervor that only a true romantic can understand.

A stunning sax solo by Theo Manning helped this song to soar even further into the musical stratosphere. Ms. Cooke captured the imagery of the song so beautifully as she sang the phrases: “You’re the apple of my eye,” and “You’re cherry pie.”

The great classic of her father’s vast array of hits, “Twistin’ the Night Away,” closed the first set with a fun, frenetic, and interactive feel. She invited several members of the audience up on the stage to dance the twist while the band rocked and she sang with verve and joyous abandon.

The second set opened with a very jazzy rendition of “Little Red Rooster”.

A light and bouncy version of “Cupid” was sung in a very engaging and captivating manner by Ms. Cooke.

One of the highlights – of an evening of highlights – was Ms. Cooke’s evocative singing in “Bring it On Home to Me.” Ms. Cooke sang an absolutely soul-stirring duet with band member Mr. Julian Sykes on this lively number; their two voices blended so beautifully on this song.

One of the most amazing aspects of Ms. Cooke’s talent is that she can sing practically any style of song from soul to rhythm and blues to pop, and she proved even further signing versatility as she dug deep into her Gospel roots and sang the sublimely moving Gospel song “He’s Wonderful.” I could barely keep tears at bay as she sang the repeated phrase “Try the Lord one day,” with such understanding and feeling. She literally had the audience in the palm of her hand as she sang of her faith with the moving refrain: “If I could touch the hem of His garment.”

Speaking of keeping tears at bay, Ms. Cooke spoke of how she hardly knew her father as he died when she was four years old and, then, she dedicated the song “I Will Always Love You” to his memory. I have never heard such a definitive and perfectly realized interpretation of this well-known song.

Ms. Cooke very daringly sang the entire song a capella, with a purity of tone and a nuanced vocal power that (as actress Lily Tomlin would say) gave me “the goose bump experience”. Chills went up and down my spine and the whole audience stood up cheering and applauding. This was one of the moments when the performer transcended some very adequate lyrics to take the song to a much deeper and higher level by virtue of her sheer vocal artistry.

For her closing number, Ms. Cooke sang the well-known Sam Cooke classic “A Change is Gonna Come”. In these trying times of world turmoil, this proved to be a very apt closing song. She tapped into all the subtext of this dynamic song and made it a truly transformative experience to savor.

Bravos to Ms. Cooke! Carla Cooke is a consummate professional and a singer of superior artistry whose future beckons with infinite musical possibilities! 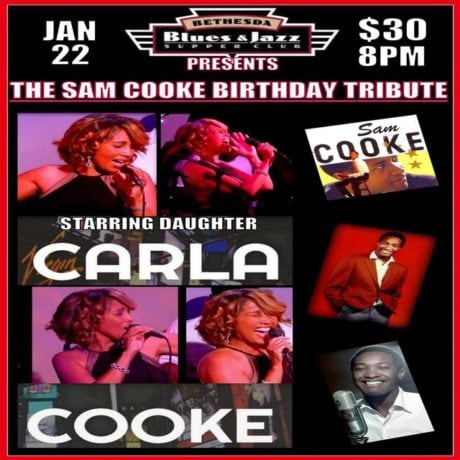 The comic skills of Billy and Carol Finch were a welcome treat as a “warm up” to Ms. Cooke’s two lively sets. The Finch’s act began with a satiric look at the world of a certain current President and his wife that was spot on. The comedy was stress-relieving without being mean-spirited. Mr. and Ms. Finch are long-time comedy pros and it shows. Their act continued with a very amusing spoof of the President and his wife set to the Green Acres television theme. Hilarious!

Mr. Finch did a rapid-fire series of pitch-perfect impressions of such celebrities as Rodney Dangerfield, Dean Martin, Nat King Cole, Frank Sinatra and Louie Armstrong. All of these great impressions reminded me of the great comics, singers and personalities from the golden years of film and television.

Ms. Finch possesses a fine voice and sang a rousing rendition of “Embraceable You” which delighted the audience.

All in all, this was a superior night out at this wonderful venue —namely, the Bethesda Blues & Jazz Supper Club. This venue is fast becoming a prime spot for musical entertainment in the Washington, DC metro region.

Carla Cooke performed in The Ultimate Sam Cooke’s Birthday Celebration Starring Daughter Carla Cooke for one night only on Sunday,  January 22, 2017, at Bethesda Blues and Jazz Supper Club – 7719 Wisconsin Avenue, in Bethesda, MD. For tickets, call the box office at (240) 330-4500, or purchase them online.

A Chat with Singer Carla Cooke: Performing a Tribute to her Father Sam Cooke at Bethesda Blues & Jazz Supper Club by David Friscic.