Being a teenager is never easy, especially if your mother has just married your uncle, who also happens to have murdered your father, and nobody can accept the fact that you’re a girl. Add in a visit from a vengeful ghost, and you have yourself an Elizabethan revenge play with a modern twist. Allison Williams re-imagines Shakespeare’s longest play into a half-hour farce. Presented by the Keegan Theatre as part of Play-Rah-Ka, a theatrical program geared toward families and emerging artists, this adaptation aims to help children identify with and understand Shakespeare—before high school takes all the fun out of it.

Allison Williams’ Hamlette is a mixture of old and new: some of Shakespeare’s most famous soliloquies are followed by pop culture references, while the costumes, designed by Nitya Ramlogan, are a steampunk-like mixture of Medieval and modern-day. Hamlette, played by Alexis Amarante, wears glasses, ripped jeans, and Converse sneakers under a Medieval tunic. All she wants to do is be recognized for who she is, but as her mother (Rachel Barlaam) reminds her, boys inherit property and rule kingdoms while girls marry and die young of “excessive childbearing”—so she’s better off being Lord Hamlet. Even Hamlette’s best friend Horatio (Carl Williams) cannot accept that she is a girl: in one of many metatheatrical references, Horatio points out that they would not be able to be friends in Elizabethan times because of the “sexual tension.”

A cast of five plays all the roles: Rachel Barlaam is both Gertrude, Hamlette’s mother, and the evil King Claudius, represented in this production by a hand puppet. Jonathan Helwig plays the pompous Polonius, who cannot let go of his days in a fraternity at a southern university, as well as Hamlette’s father’s ghost, whom nobody seems to quite understand. The dimwitted Laertes and his sister Ophelia are played by Jenny Leigh Judd, which leads to a comedic moment when both are meant to appear on stage at the same time. And everyone except Hamlette ends up taking on minor roles that pop up along the way.

An opportunity was missed with Ophelia’s character. While Hamlette’s hardships as a young woman in a man’s world gave us an insight into Elizabethan society, Ophelia is relegated to a ditzy, valley-girl persona, serving only as comic relief. In the original, Ophelia is caught between the wishes and power struggles of the men around her, finding release only in her suicide. But while her madness and death are represented in the play, no effort is made to explain why, although the death of Hamlette’s father and her subsequent quest for revenge are told in detail.

Director Ricky Drummond’s production is constantly moving, carrying the audience from jokes to Star Wars references, from sight gags to fight sequences. The set is the same as the one used in Mack, Beth, essentially a blank canvas for the actors to play on. Sound Designer Jordana Abrenica sets the tone for the production, using a mixture of Medieval music and wacky sound effects to tell the story.

I wish Williams’ play was longer. With its combination of comedy and Shakespearean revenge tragedy, it’s a shame to fast forward through most of the plot all the way to the end. The fast pace of the action and energy of a good cast would be more than enough to keep audience members paying attention for at least an hour.

Hamlette is a family-friendly take on what has become one of the most frequently interpreted plays by the Bard. It has a little something for everyone, giving us an idea of the characters as they were originally imagined while connecting the stories to the present day.

Running Ttime: About 45 minutes, with no intermission. 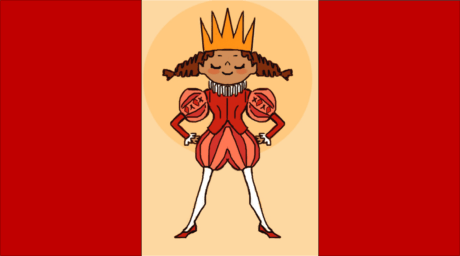