Round House Theatre continues to shine a spotlight on the works of Tony Kushner (Angels in America) as it explores life’s complexity through its seeming simplicity in Kushner’s autobiographical Caroline, Or Change. Childhood memories have a way of evoking and magnifying just about every human emotion. Kushner’s memories of growing up in a middle-class Jewish home in southern Louisiana in the 60s take a deep dive into the challenges of change and find common ground beyond culture and class that happens when life is stripped bare of external differences. What emerges in Caroline, Or Change is a thought-provoking theatrical experience that forces one to fully engage to find life in the balance between Jewish and African American cultures and the deeper meaning that transcends them both.

Directed and choreographed by Matthew Gardiner with Musical Direction by Jon Kalbfleisch, Caroline, Or Change originally was conceived to be an opera. However, when George C. Wolfe, who directed the original production, was in workshop with Tony Kushner who wrote the book and lyrics, they agreed that a musical was the right way to fully convey the emotional content of this piece.

Collaborating on music with Tony Award winner Jeanine Tesori, Kushner’s Caroline, Or Change, his only musical production, still has heavy operatic overtones and a poetic libretto with 95% of the dialogue in song. But Tesori’s blending of a variety of musical genres creates something that feels uniquely different in a musical that brings together classical music, spirituals, blues, Motown, folk music and Jewish Klezmer music to interesting effect.

Noah Gellman, an eight-year old (played by a pensively mature Griffin McCahill) has recently lost his mother to cancer. His father, Stuart, has just remarried Rose, a lovely woman whom Noah has decided to despise. Instead, Noah embraces Caroline, a 39-year old African American maid who does domestic work in the Gellman home (“Noah Down the Stairs” and “The Cigarette.”)

In the central relationship between Noah and Caroline, we see the underpinnings of each character’s life transitions (“The Bleach Cup”) and the story line unfolds the emotional fallout and resulting crises between them that inevitably come with trying to adapt to change (“The Twenty Dollar Bill.”)

The vocally astounding Nova Y. Payton, as Caroline, is a somberly stoic figure who laments having been a domestic worker for the past 22 years, a single parent of four, and a victim of domestic abuse (“I Got Four Kids”). Forlorn and seemingly hopeless about her future, Caroline yearns for change in the midst of change all around her.

The year is 1963 and JFK has just been assassinated. Dreams of change for the African American community are dashed with Kennedy’s death, yet stirrings of the Civil Rights Movement are emerging. Caroline and her headstrong adult daughter Emmie (a rebelliously effervescent Korinn Walfall) confront their differences as they wait at the bus stop and confront each other about what it means to be black in an America on the verge of major societal change (“The Bus/The President Is Dead” and “I Hate the Bus.”)

This production has an aura of emotional desperation that has to do with confronting difficult transitions (“Caroline, There’s Extra Food”) but Kushner lightens the mood with anthropomorphized objects taken from Caroline’s life such as a washing machine she uses daily to wash the Gellman’s’ clothing clothes in the basement of the house. The Washing Machine (a feisty Theresa Cunningham) and the Dryer (V. Savoy McIlwain as Caroline’s soulful alter ego) give the show a fantastical flourish and create some much-needed levity (“Laundry Finish”).

The mood gets even brighter through The Radio, a Supremes-like girl group trio who create the Motown sound, appearing throughout to add story narrative (“The Dryer”) played with classy, glittering, Diana Ross edge by Felicia Curry, Olivia Russell, and Kara-Tamieka Watkins.

The symbolism of The Moon, (a gracefully calming Deloris King Williams) that planetary influence that shifts the tides, hangs in the distance to assure that change may come but that all is well (“Moon Change.”)

Tensions rise, however, when Dotty, (an optimistically ebullient Awa Sal Secka), Caroline’s friend, decides to better her life by taking classes at the local university. Aspirational dreams clash as Caroline struggles to believe in better days for herself (“Dotty and Caroline”).

Stuart Gellman, Noah’s dad, (played by Will Gartshore with his own brand of melancholy) is still grieving the loss of his wife and doubting that there is a God in all this, despite recently marrying his wife’s best friend, Rose (“There Is No God, Noah”).

Dorea Schmidt as the lovingly dutiful Rose Stopnick Gellman is struggling to contain her disappointment at not being fully accepted as Noah’s new step-mother as she admits to her dad (Scott Sedar as a scruffy political conservative who questions the Civil Right Movement) that she is not happy in her new surroundings having left New York City for Lake Charles, Louisiana (“Long Distance.”)

Then there’s the symbolism of the basement of the Gellman home crafted with architectural and engineering creativity within the movable three-story high Gellman residence by Scenic Designer Jason Sherwood. In Louisiana, most structures including grave yards are above ground. However, Caroline finds herself deep in the bowels underneath the Gellman home as she literally and figuratively strives to move to higher planes as Payton delivers a showstopping and roof-raising performance of “Lot’s Wife.”

And in the final scenes of Act 2, Rose and Noah have moved to the top floor of the home in a bedtime embrace as Noah finally begins to accept his mother’s death in a welcoming gesture to his new mother (“Why Does Our House Have a Basement?”).

As an African American woman pondering the intersect between Jewish and African American culture, I couldn’t resist going Freud on the mindset of the eight-year old Tony Kushner whose growing up in this house inspired Caroline, Or Change. Perception is one’s reality, and apparently Noah (Tony) saw Caroline as a figure that he greatly admired for her strength and her affection. But, he must have also believed in the effects of poverty to kill the spirit.

From my perspective, I see the persistent resilience of the African American community. I see its inherent hopefulness in having a dream, and the pluck to sing “How I Got Over” a well-known spiritual, in fiery defiance to economic deprivation and persistent racism. Caroline’s seeming worldview was not what I perceive about the African American community. But Kushner’s perception became his reality as reflected in this pensive theatrical gem.

Although I usually expect a touch of Gene Kelly/Debbie Reynolds glee for a theatrical genre that communicates through song, Caroline, Or Change, nevertheless, evoked a strong emotional reaction, but more reflectively and introspectively in contrast to the joyful bent of most musicals.

The voices of this cast are all simply wonderful, powerful, and penetratingly beautiful. Their outstanding acting matches the superlatives of the singing. For example, Emmie’s hopes for a better future for her children is welcomed relief in Korinn Walfall’s stirring performance of “Emmie’s Dream/Epilogue.” This is a great ensemble.

Tesori’s music soothes the tone of the production and for whatever disconsolate feelings one might have after experiencing a musical that deals with unresolved sadness and yearning, the music of Caroline, Or Change has a way of shifting the meter to the expectant notion that in the end it’s really gonna be all right. 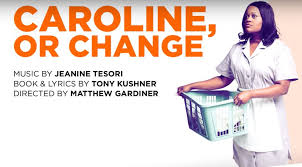